Well, the chain letter continues. I was tagged by Dan at Eight Hour Layover (Thanks Dan!) to give my 3 best travel secrets, based on some sort of chain that started with this woman Katie over at TripBase. (If you’re reading this, Hi Katie of 3-travel-secret fame!)

I’ve done a fair amount of travelling, but I wanted to spotlight some of the best indie club nights I’ve been to while living in various cities. More often than not, you’ll find these to be great, cheap nights out in the city. And you don’t even need to worry how you look because the clubs are likely to be filled with dirty hipsters anyways!

I’d also like to preface this with the fact that I’m a huge indie music fan, so one of the big draws to these indie clubs for me was the chance to hear new music. If you’re interested in my music taste, check out my Last.FM account to see what I’ve been listening to.

I lived in Sydney for 4 months during the summer/spring of 2006. Live music in Sydney is expensive (they’re on an island and international bands just don’t come around as often), so finding a venue that played all the trendy, hipster songs I wanted to hear was always tough. My friends and I went to a lot of bars that played a lot of 80s music and Top 40’s (I’m looking at you, Three Wise Monkeys), which were always fun, but sometimes I’d just rather listen to some authentic Australian indie tunes.

That’s where Purple Sneakers comes in. If I remember correctly, it was a $10 cover to get in (that was enough to defer some of my friends, but I pressed onwards). Every Thursday, the drinks were cheap, the music was awesome and the dancing was fun. It’s at the Abercrombie Hotel on Broadway, which was convenient for me because I lived a short 7 minute walk away. 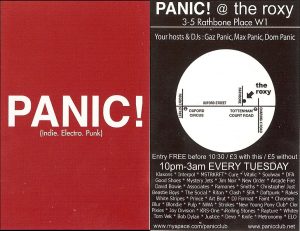 Panic! @ the roxy—an awesome Indie/Electro/Pop night—from a flyer (image above) that was handed to me on the street. I think I had also seen it written about in the always useful Time Out magazine. London has a huge music scene and I found that I learned the most about new and up-and-coming bands by going to as many indie dance clubs as possible. At one point, I think I had found one to go to each and every night of the week. White Heat (also every Tuesday), Club NME at Koko (every Friday), and whatever else I saw posted in Time Out were my regular hang-outs.

The best part about all these great indie nights in London? The price! Almost always these were my cheapest nights out in the city and I always met new people—Londoners, each and every time! The drinks were cheap (I seem to remember £2 tequila shots), the crowds were INSANE (always left smelling like spilt beer) and the people were all young & local hipsters. If you like good music and a fun time these London clubs are not to be missed!

3. The Pill at Great Scott in Boston 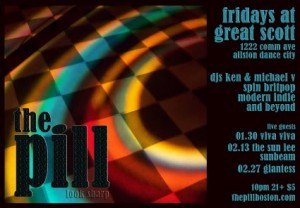 No list of indie rock clubs would be complete without this Boston institution. The crowd here is probably slightly older than the ones in London due to the fact that it’s in the US, where we’ve got a higher drinking age, but it attracts a healthy mix of people. The Pill attracts a lot of local bands and aspiring musicians—partly because it’s located in Allston, affectionately referred to as Allston Rock City.

The music is labelled as BritPop and they play a lot of stuff like The Libertines and The Smiths, but you’ll get local hits from the likes of Passion Pit as well as all that (admittedly awesome) trendy hipster music (Cut Copy, MGMT, etc). And, with a $5 cover and $3 PBR beers, it’s easily one of the cheapest (and most fun!) nights out in Boston.

If you’re ever in Boston between now and… it’s looking like the end of March… I’d be happy to treat you to an awesome night out at The Pill!

—
Got any recommendations for indie dance nights around the world? Leave them in the comments, please!

—
20 Jan 2010 update: It looks like Purple Sneakers is no longer hosted at The Abercombie. A quick Google search should let you where it is these days.