Wombat Wednesday is a new photo series showcasing the travels of Mr. Wombat. Who is Mr. Wombat? Well, he’s a stuffed wombat I brought back from Australia. Why? Because wombats are awesome—especially Mr. Wombat who has been all over the world. Kind of. 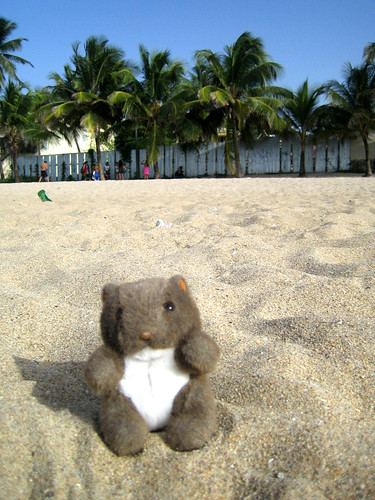 I probably should’ve used this photo last week since you can clearly see who/what Mr. Wombat is. Regardless, here he is. I started taking photos of Mr. Wombat on my trips in June 2007, though the two of us began our lives together in May 2006.

June ’07 was a busy month for Mr. Wombat. He went from Paris one weekend (see last week‘s post) to Puerto Rico the next. Ah, such is life. Like Paris, though, we had under 24 hours to get in the sights. And in Puerto Rico, that meant we were busy—especially since it was our first (and so far only!) visit to the country. Or is it territory? I’m confused.

The 24 hours were spent lounging on the beach, drinking piña coladas, drinking mojitos, eating a Cuban sandwich and chatting up the bartender at a beachside bar. (Sidenote: The bartender ended up recommending a bunch of cool bars/clubs to check out—which I didn’t get to—but maybe I’ll write about that later.)

Anyways, the 24 hours were extremely relaxing for the two of us. Despite getting terrible sunburns which I had to suffer through on the flight back to Boston.