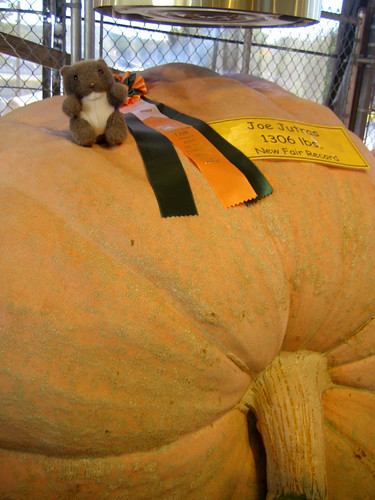 So, pumpkins have been on my mind since reading Shawn’s round-up of what he learned last week on his blog. And here is my only pumpkin-related Wombat photo.

In September 2007 I visited the Durham Fair in the hometown of pretty much my entire mother’s side of the family—Durham, CT. It’s a small town in a rural area. Barns and farms everywhere. As a kid, I’d visit my Grandma’s house just about every summer. I always liked being there at the end of the summer to go to the Fair. It was always a big ordeal and my family would get pretty involved. In 2007, I had the pleasure to share my childhood memories with Mr. Wombat.

A couple highlights of the fair:

Mr. Wombat and I visited the tractor pull, ate some fried Oreos, some fried pickles & drank an extra large lime rickey. He also insisted on checking out the giant pumpkins and had to sneak past a barrier so I could get this shot of him. We had been waiting in line (I know, right?!) to see the giant vegetables (wait! are pumpkins veggies?), and the people behind us were pretty amused.

Honestly, the Durham Fair is probably like your typical county/agricultural fair. I always liked it as a kid, and as a 20-something, it still held up to my ideals pretty well. Did any of you grow up going to county fairs? I’d be curious to see what these type of fairs are like across the world, so hopefully I’ll come across some in my travels.