Smithsonian art exhibit on to do lists & an illustrated packing list

I’m finding myself making lots of lists recently. Lists of friends to e-mail, of things to do, of stuff to buy.

When I went to Washington, D.C. in February 2010, I visited the Smithsonian National Portrait Gallery. I’d never been before and the idea of going reminded me so much of the National Portrait Gallery in London, which I easily visited on five different occasions while living in London. Inside the Smithsonian Gallery, I stumbled into a room with a wall plastered in gigantic, beautiful typography. I was instantly drawn in. 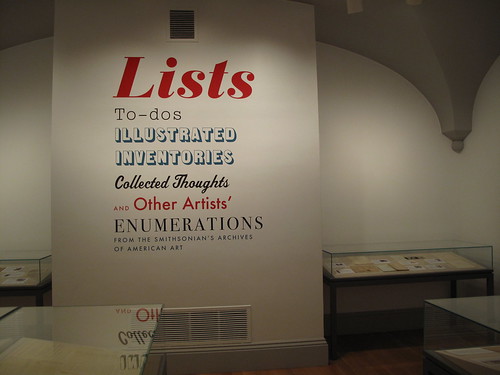 The exhibit title may be a mouthful, yes, but check out that typography!

The basic premise of the exhibit was to showcase various lists from the Smithsonian Archives of American Art. They have an impressive collection of a huge variety of lists. Taken from the exhibit introduction, you can get a sense of the variety:

Viewed separately and together, the collection of lists made me feel a little less crazy about constantly scribbling things into my own Moleskine notebook. Maybe it’s okay to make random lists every day, after all.

Wouldn’t it be nice if all packing lists were so lovely? Adolf Konrad’s illustrated list is pure genius!

More info on the exhibit…and the book! 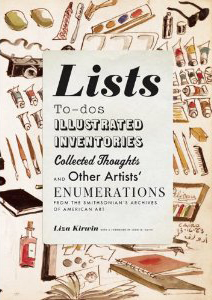 I was absolutely mesmerized by this exhibit. Probably because the typography was eye-catching, the topic was close to my own heart and the pieces were actually interesting, funny or incredibly personal. The exhibit has long been down by now, but I’d recommend at least flipping through the book if you come across it.

The lists are a reminder that we—you, me or even Pablo Picasso—all have to deal with the same stuff when it comes down to it. We all have people to invite to parties, things to pack and places to see. And more often than not, we write (or draw, scribble and graph) them on paper.