Yesterday I went to the David LaChapelle photography exhibition at the Tel Aviv Museum of Art. One of his pieces is large X-ray-ish images of American and Israeli money. I’m sure there’s a political message behind his work, but for me, I liked seeing the gigantic currencies from two different countries side-by-side. Currency looks different in each country (and over time, too), so it’s pretty cool to see familiar currency in a new light.

As a designer, I’m acutely aware of the look and feel of money. Or at least I try to be. That’s why one of the only souvenirs I’ve been collecting on this trip is my leftover money. It can get expensive, yes, but it’s worth it. Money, like everything, is designed for a reason. Its design is democratic—it has to be legible and secure for everyone…including visitors. When India announced a new typographical symbol, I was interested to see how the design would translate. Money is cool, yo.

What do you think? Do you ever pay attention to those old, dirty bills in your wallet?

Need a place to put your money? Win a wallet! 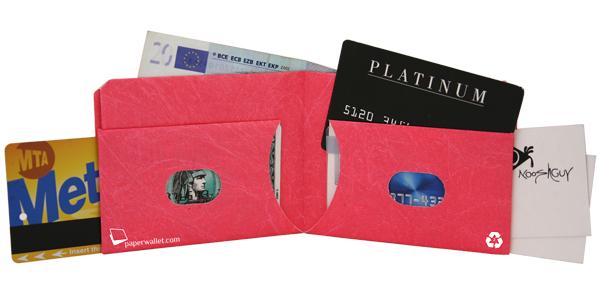 As luck would have it, Paper Wallet has offered to give away one of their trendy paper wallets (not actually paper, but some sort of paper-thin material) to someone. These wallets are about as hipster as you can get. And it seems to me like it’d be pretty useful for traveling, too. If you lose it, it’s just paper.

Maybe next time I’ll give away money. (uh, probably not)

TO ENTER THE CONTEST: Simply leave a comment (be sure to include your e-mail address) below. I’d also ask you to become a fan on Facebook, but that’s not allowed. So just a comment will do. This contest will end on Wednesday, September 22 so be sure to leave a comment before then. A winner will be chosen randomly. You do not need to be a hipster to win; in fact, a hipster would probably make his or her own paper wallet. Or pay an exorbitant price for one.

__
This contest is expired. Congratulations to Kristin for winning the Paper Wallet.