This round of Travel Photo Roulette brought out the fun in a lot of the entries…which is exactly what I was hoping for! Sometimes it’s nice to let loose. There were a lot of entries and choosing one that best represented what Friday night might mean to you, was a challenge. I think what made this week so interesting was that everyone has a different idea of a Friday night, yet there are some definite recurring themes in a lot of entries (ie, drinking).

And the winner is… 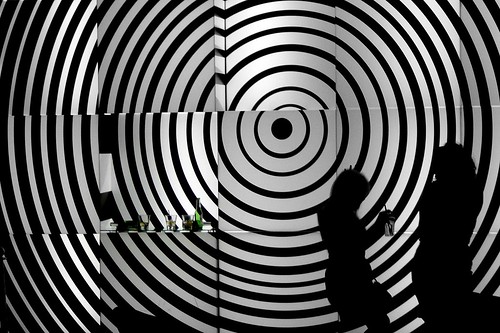 This is a Friday night in Liverpool, UK. Not bad considering this was the last photo I’d taken that night and I’d had quite a lot of beer by that point!!

I really love this photo. It’s simple enough that it’s not overwhelming. The background in the bar is absolutely mesmerizing and the two lonely dancers seem like their night is slowly fading to an end. I’m a graphic designer, what can I say… I went for the most graphic image.

Okay, there were several other stand-out photos.

A half-finished bottle of Southern Tier’s “Creme Brulee Stout” at the now closed Brickskeller in Washington, DC. Brickskeller was a DC staple, with a beer list featuring over 1,000 selections. It was the perfect way to start (or end) a Friday night in the nation’s capital.

I love beer and Micah’s shot really makes me thirsty. When I was in DC last year, I tried to get to Brickskeller but it was closed when I was in the area. Apparently, it’s now closed down as well! Check out Micha’s blog: Travelitude.com.

Well, Friday night’s the night you get out and celebrate the weekend which for many means hitting a club.

Sometimes a Friday night is just about enjoying a cold drink with a friend at a quiet bar. Other times it’s about dancing your heart out and screaming on the dance floor (among other things). Travis’ photo from his months of photographing the club scene on Ibiza really captures the latter. Ibiza is still a place I’d really like to visit myself one day. Maybe the next time I’m in Spain! Check out Travis’ blog at Flashpacker HQ.

Be sure to participate next week!

Thanks to everyone for sharing your Friday night photos! Be sure to check Kristian’s blog for the next round of Travel Photo Roulette.