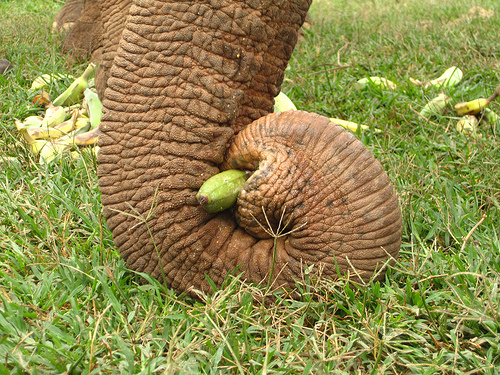 I first read about Elephant Nature Park over on the Got Passport blog, but as it turns out, it’s actually pretty well publicized. It’s in the Lonely Planet and there have been features on CNN and other international news organizations. One of the many things tourists come to Thailand for–besides sex, drugs & beaches to name a few–is elephants.

Elephants in Thailand are a curious subject. For a long time, they’ve been a national symbol, but they’re also considered to be work animals and many people’s livelihoods depend upon them. And elephants in the tourism industry are ubiquitous. Any trek arranged from Chiang Mai involves a stopover to ride an elephant, and some are used on city streets for begging (though I’ve never witnessed that in Thailand, I did see it in Delhi, India). 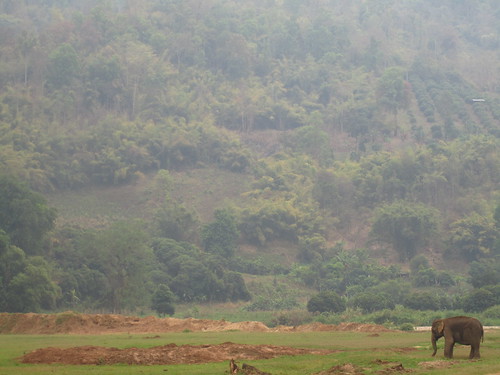 I don’t know much about the elephant-tourism industry in Thailand except what I heard at Elephant Nature Park, but it does seem like a risky game to play with living, breathing animals. I’m not one to get too emotionally attached to animal rights, but I have supported various organizations before. Regardless, when I see an animal chained up, I can only wonder.

So, with all this on my mind, and a desire to do some “responsible” travel while in Thailand (avoiding many of the nasty aspects of Thailand tourism), I opted to visit Elephant Nature Park for the day.

A day trip to the park is actually quite expensive, and definitely not on most budget traveler’s lists. That’s probably why the other people in my 10-person minivan weren’t solo travelers on “big trips” but instead included a British/American family of lawyers and short-term holidaymakers on whirlwind tours of northern Thailand. The park is about an hour and a half drive from Chiang Mai, but on the way there you watch a short, professional video about the park, its goals and the nature of elephants in Thailand in general. 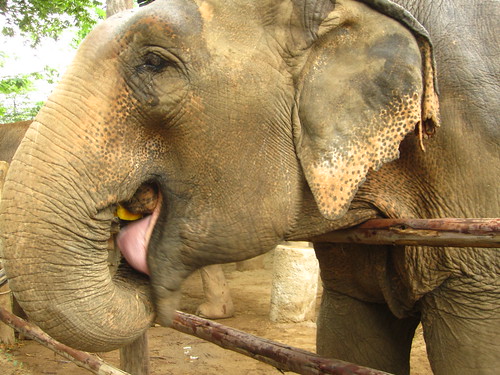 Once at the park, you spend most of the day feeding the elephants (they eat A LOT), bathing them once or twice in the nearby river, and enjoying a smorgasbord of a buffet lunch. Again, they show another video specifically about the park and its founder, Lek.

I’d say that the park is mostly visited by families, but it’s definitely worth the visit. My day was extremely informative and I spoke with some people who were volunteering there for weeks on end, getting to know and recognize the 34 rescued elephants. Just from the day there, I learned a lot about a few of the elephants and some of their stories were truly distressing. But the fact that this place exists and knowing that there are more than a few people who care so much about elephants and dedicate so much time, effort & love to helping them is really inspirational.

Put the Elephant Nature Park on your list to visit if you can. Or at least get to know a little about the elephant-tourism industry before you step on top of one.

Are you looking for more photos of elephants in Thailand? Check out my other post featuring really cute elephants :)