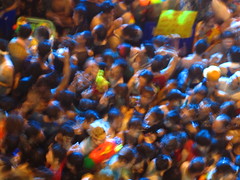 …is just insane. I’m not sure words will do it justice. I began to mention some of the insanity on my post about how awesome Bangkok is with good travel friends, but didn’t do it justice.

Songkran in Bangkok will be one of  those few travel memories from this trip that will have a lasting impact. There was the night I spent drinking in Seville with an Australian and an Italian; there were a few summer nights in Tel Aviv which I won’t soon forget; there was Couchsurfing over Christmas in Bangalore; and then there’s Songkran in Bangkok.

The Songkran festival is Thailand’s traditional new year celebration. And it’s all about water. Well, not exactly, but the whole country seems to get wet for the three days in April. People literally throw buckets and buckets of water (oftentimes ice-cold) anywhere and everywhere. It is truly insane. 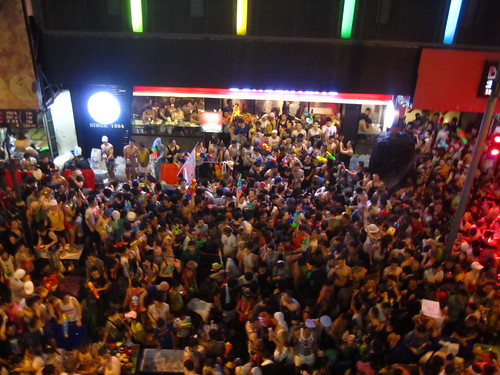 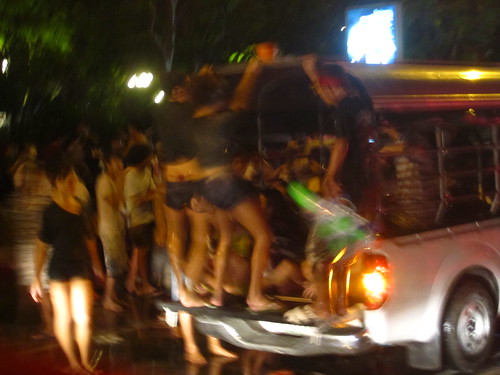 Just walking down the street, even if there is seemingly no one around “celebrating” (ie: throwing water on you), you’ll likely get wet by a passing pickup truck full of Thais!

In Bangkok, no where was safe. Taking the public buses, you’d be splashed or hosed down while driving through the city. The fact that so many Thais hardly flinched when getting soaked on their commute is just amazing! Sometimes it was hard to believe people were okay with it. I was definitely tired of being wet on the last day, but it didn’t stop me from enjoying getting other people wet! 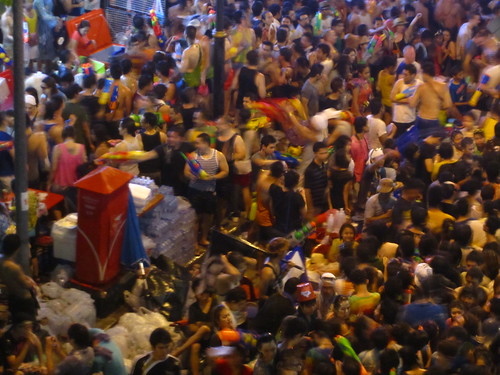 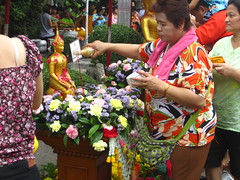 There’s a Buddhist religious part of the Songkran festival as well, involving the pouring of water over Buddha statues. But really, as a tourist in Bangkok, you’ll just see a whole lot of partying/drinking/splashing.

Silom seemed to be the place to be for Songkran in Bangkok. This was where Bangkok set the world record for world’s largest water fight, and the area was full of local Thais (those that didn’t escape the city to visit family). It was so much fun there as a “farang” (generic non-derogatory Thai word for “westerner”), because we were few and far between. Everyone wanted to “paint” our faces with the chalk that was being sold by the bucket.

This video from the first night should give you a small idea of what was happening in Silom. Imagine people with water guns, others with hoses hooked up to direct lines of water, food and beer for sale everywhere, and loud music blaring from stages scattered throughout the crowd. Then imagine wet t-shirts, topless guys & hoards of dancing 20-somethings. All with water guns. So much fun!

The atmosphere here was a little different than in Silom. There were a lot more farang here (obviously—being the main tourist street) but that didn’t mean it was any less fun! I spent the first night of Songkran drinking off Khaosan here, and most of the second day and night partying right on Khaosan Road. During the day the waterfighting was incredibly intense, but a lot of fun. And there were a ton more cheap food options on all the side streets. And plenty of beer, too.

Really, I can’t stress how much fun Songkran in Bangkok was! If you’re ever planning to travel in southeast Asia, and you like a good festival, then Songkran is for you!