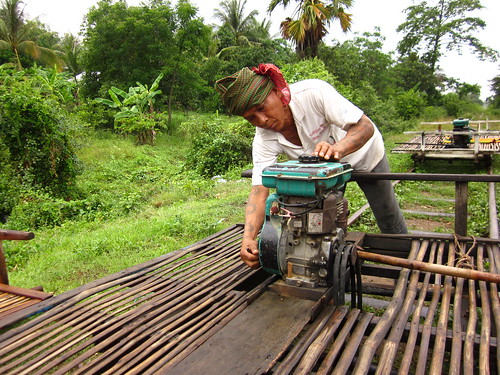 Battambang’s biggest tourist attraction is the bamboo train. Basically, its story is this: it’s a train made out of bamboo. Why? So that it’s ultra-light. Which means that when the bigger, faster & more expensive trains come barreling down the train tracks, the bamboo train can be disassembled and put to the side (with enough time to avoid a collision). It’s a cheap and relatively easy way for locals to get around and locally transport their goods.

Unfortunately, Battambang’s bamboo train isn’t really used by the locals anymore. Its original curiosity has been eclipsed by dollar signs. The bamboo train is now, simply, just another tourist attraction—and not even a good one at that.

I’d heard good things about Battambang. And granted, my boat trip from Siam Reap was the most picturesque boat trip I’ve probably ever been on, but still…Battambang was a bit of a disappointment. The fact that the bamboo train is no longer even used by locals and that it’s just become a rather silly little tourist attraction was just not my style. Maybe if I was six years old, the bamboo train would be cool. But, alas, I’m not. Battambang wasn’t the most interesting place in Cambodia that I’d visited, and with its main tourist attraction a train made out of bamboo, I wasn’t impressed.

The scenery from the 20-minute ride wasn’t even anything spectacular. Oh well. But that doesn’t mean Cambodia didn’t have a lot more to offer me. Read some of my other posts about Cambodia