Friday nights at the Schlesisches Tor U-Bahn in Kreuzberg, Berlin involves dancing in the subway station. Everyone dances. Everyone smiles.

Nightlife in Berlin is without a doubt some of the best in the world. It doesn’t matter much whether it’s the weekend or not, Berlin nightlife is almost always fun. Especially if you’re in Berlin during the summer.

With a reputation for parties, dancing in Berlin isn’t hard to find in a club. There are a lot of clubs around town—for every budget and every type of person. But with a reputation for hipsters, why pay a €10 entrance when you can party for free in a subway station (the U-Bahn)? 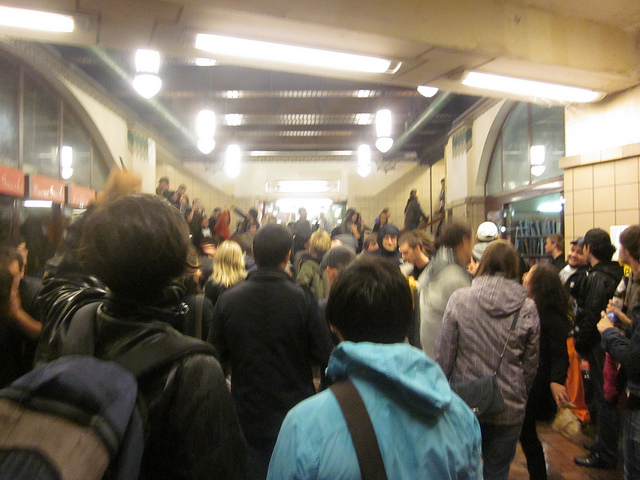 I’ve happened on parties a few times in Berlin’s u-bahn, but nothing compares to Friday nights at Schlesisches Tor.

I’ve happened to be in the area after midnight on two separate Friday nights so far this summer (well, just the last month or so) and both times, it’s been an amazing party. People are just dancing—without caring who’s there or who’s watching. Every type of person from the older woman collecting bottles to the tourists heading back to their hostels to the late-night party folks just heading out for the evening. Dancing! In Berlin!

Maybe it’s just a bunch of hipsters dancing in the Schlesisches Tor U-Bahn station in Kreuzberg, but it feels like so much more. One night when I was there, the crowd dancing at the bottom of the stairs would erupt into cheers as people coming off the trains filed downstairs. So many people pulled out their iPhones and cameras and started recording videos. Everyone was smiling. People were giving high-fives. Absolutely awesome.

(Seriously, I can’t stress enough how remarkable the feeling is to be in a place where suddenly everyone is smiling unexpectedly. All the new arrivals, whether leaving Kreuzberg to go home for the night, or those just going out. No one necessarily expects to encounter a massive dance party with drunk people cheering, singing, dancing, high-fiving. And yet here it is. And so you just have to smile.)

The second time I stumbled on a party in the Berlin subway, I was on my way home  for the night. I’d just met Jaime from Breakaway Backpacker for a few drinks—of the cheap, bought-from-the-corner-shop-and-drunk-on-the-street variety. On our way back to the subway station, we were lucky to find a party happening in the U-Bahn. Seemed silly to just walk through when you could pick up yet another cheap beer in the convenience store on the street level. And seemed even sillier to just walk on right through. So we danced.

When it’s 1 a.m. and there are a hundred people dancing to a make-shift DJ in a metro station, what’s not to love? It’s just one of many reasons why I love this city. Dancing in a subway station is like a flash mob but without all the pretentiousness. Sometimes I now actually just plan my Friday nights around the possibility of dancing at the Schlesisches Tor U-Bahn. When as simple a thing as dancing in the subway can make so many people smile, you’d have to be a fool not to dance. It’s my favorite type of dancing in Berlin.