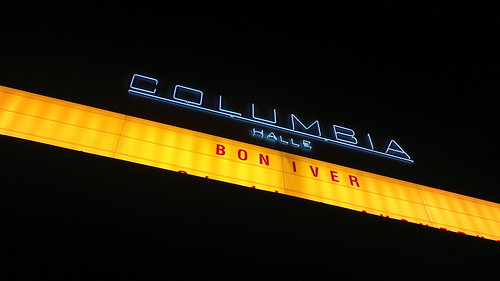 I ♥ live music. There’s something really special about seeing a band up on stage, playing passionately. No matter how crap the band is, if the sound quality is decent, the music just gets me. When I was living and working the “American Dream” in Boston two years ago, I went to (on average) to two gigs a week. It was a lot, yes, but Boston also got a lot of great bands passing through. And with a pretty nice corporate job, it was fairly easy to afford all my favorite indie bands (and usually a band t-shirt to go along with the show.)

Since travelling abroad (and now “living” abroad), I’ve been to a total of two gigs. That’s two concerts in 18 months. Not quite my best average, I’d say.

So that’s why when I heard about the sold-out Bon Iver show, I was pretty damn excited. Well, not necessarily excited at first—because it was sold out. But still. I was determined (kind of) to find a way. Prone to my usual procrastination and laziness, however, by the time the day of the concert rolled around, I had no ticket, no motivation and no urge to go stand around in a U-bahn station asking for a spare ticket. As luck would have it though, a friend contacted me a few hours before the show with news of a free ticket. Score one for my laziness!

As is increasingly usual, I got what I wanted without any hard work. (Kidding – kind of.) Regardless, I showed up at the venue, met my friends and ordered a beer. The opening act was Kathleen Edwards. Kind of “indie folk”, I’d describe her. She was Canadian – used a few swear words. Was nice. We were standing up at the front, but there was a couple just in front of us acting like a pair of seals.

Listen to a clip from Kathleen Edwards’ set:

Generally, I enjoyed it. Minus the couple flogging to my right. Which got very annoying very quick. But it’s nice to see that gigs & concerts in Berlin are just like those in America:

Bon Iver eventually came on stage. Not following the music industry so much recently (been busy with other things), I actually had no idea how huge of a band Bon Iver is—literally like 10 different people. It was a pretty great performance. But like I mentioned at the beginning of this here post, I’m actually quite easy to please so long as the music is live. Bon Iver’s music is, without a doubt, beautiful. When Bon Iver finally played “Skinny Love“, the crowd swooned.

With a sold-out crowd, there was definitely going to be an encore. And Bon Iver didn’t disappoint. It was kind of funny to me to think that the mostly German (there were definitely a fair amount of tourists and/or expats there) crowd chants a German word/phrase for “Encore” when the band certainly didn’t speak German. But I guess that’s the beauty of language and culture—some things are universal and can be figured out by the circumstances alone. Still funny though.

So, after going without a live gig for so long, it felt good to get some live music in my ears. But for 45 €, I’m not sure how many gigs I’ll be going to while living in Berlin. I spent nearly the same amount of money to see Cut Copy in Prague over the summer (which was also an amazing show—and my first gig to see in over a year). However, I do find that gigs are a great way to meet people. And if there are just as many good-looking folks at all the other live music gigs in Berlin, you can be sure I’ll be there. Cost/benefits analysis there.