I recently visited the Museum für Film und Fernsehen (Museum of Film & Television) here in Berlin. The museum covers a massive range of topics on the history of cinema in Germany. I particularly enjoyed parts from the permanent exhibit about German cinema during Nazi rule (the “National Socialist State”). I found one story in particular, about an actor/director Kurt Gerron especially interesting—more on that another time.

Anyways, I came away with some new knowledge and thought I’d share. Here are some German movies I didn’t know were actually German (or sort of)… 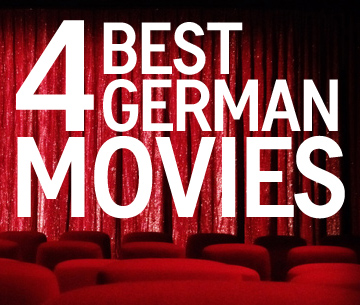 I loved this movie as a kid. Like, actually loved it. So much so, in fact, I even owned the DVD as of two years ago. Perhaps I should’ve known it was a German movie (West Germany, to be precise) because the kid’s name in the movie is Bastian. BASTIAN.

The movie was released in 1984 and it’s pretty much exactly what you’d expect from a children’s movie from the ’80s, ie, it’s AWESOME. Bastian is a quiet boy who likes to read (I could relate) and he has to save a princess in the fantasy-land of Fantasia. There’s a flying dog-snake thing and some awesome character names like Atreyu. ATREYU!

Wikipedia also tells me that The NeverEnding Story was the most expensive film ever produced outside the USA or USSR when it was first released. I recently saw the movie again, and, uh, I think they could’ve spent a little more on the special effects.

Perfume: The story of a murderer

Okay, a little ashamed that I never realized Perfume was a German movie. I mean, the book is one of my absolute favorites

. And I knew the book was German (well, I did once someone told me – I thought it was French at first). But so it goes.

This one’s pretty recent and I guess its setting is what tricked me into thinking it was some good ol’ classic American thriller. The International movie’s marketing and some of the most exciting scenes take place in New York City’s Guggenheim museum. Being a huge Frank Lloyd Wright fan (my childhood dream was always to become an architect), I took some sort of sick pleasure in seeing the Guggenheim’s lobby completely destroyed in a massive gunfight. Plus Clive Owen’s in the flick. It’s a win-win.

As it turns out, The International was mostly filmed in Berlin, which included an entire life-size replica set of NYC’s Guggenheim. The movie even opened the 2009 German Film Festival (which, by the way, I hope to catch here next year).

Okay okay, I’m cheating with this one. I know Run Lola Run is German and, in fact, it’s one of my favorite movies. I’m just including it here because I like the movie a lot, it takes place entirely in Berlin (many of the scene locations have been heavily documented online), and it’s another Tom Tykwer flick. All these movies on this list (excluding The NeverEnding Story) are Tykwer films. So there you have it: I just didn’t know Tykwer was German.

—
Quick aside about the German Film museum:

The museum also had a special exhibit on: “Between Film and Art. Storyboards fom Hitchcock to Spielberg”. The exhibit is a showcase of movie storyboards throughout history (from Disney’s Snow White and the Seven Dwarfs to Star Wars: A New Hope). Definitely worth a visit and the exhibit is only up until Nov 27 – so go quick.