The Soviets originally erected a monument to those that had lived and died at Sachsenhausen concentration camp at the end of the 1950s. After the reunification of Germany in 1991, additional museums and educational facilities opened at Sachsenhausen. Today, the site is a chilling memorial to the prisoners who lived and died there. An interesting fact: Sachsenhausen was one of the sites of the largest mass murder of homosexuals during Nazi Germany. This was due to its proximity to Berlin which had been a fairly liberal and open society in the 1920s.

I visited the camp in January 2012 on a guided tour, though the site is actually free and open to the public. Having a tour guide, however, is not included in the free admission so I was glad to have a knowledgeable expert on Holocaust history at my disposal. 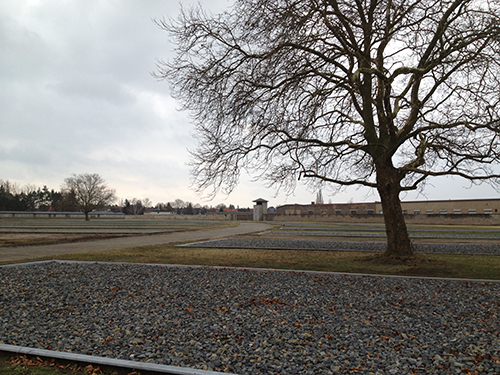 The photo above is of one of the “shadows” of the many bunks at Sachsenhausen concentration camp. Most of the buildings of the camp have been destroyed or dismantled during its history, so today the museum has erected stone gardens where the buildings once stood.

Thoughts on visiting a concentration camp

My visit to Sachsenhausen was one of the first times I was face-to-face with the Holocaust & WWII history in Berlin. Besides the little bits of history you come across in downtown Berlin (and the Holocaust memorials), visiting Sachsenhausen is an especially somber tourist site. An interesting news article from Spiegel sheds some light on disaster/death-camp/tragedy tourism in Germany and much of Eastern Europe:

It was as if, after reading “Let’s Go” and “Fodors”, the Holocaust became something to sandwich in between a quick art museum visit in the morning and a session at the Hofbrauhaus in the evening. In short, they didn’t know what they were getting into. 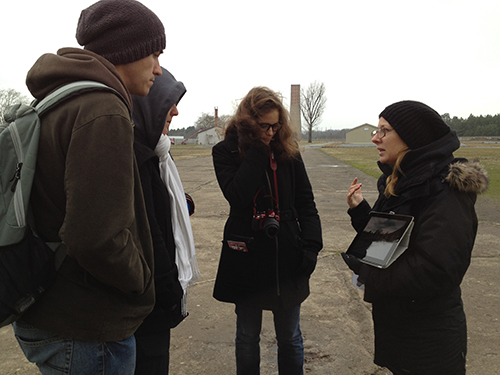 Some people may not care to visit concentration camps because they see the tourism side of it as a morbid obsession with tragedy. Personally, I don’t necessarily disagree with that fact. It’s just that I also think it’s important to see some of these places so you can come away with a (however fleeting) personal connection to history.

Sachsenhausen is the second concentration camp I’ve visited and I wouldn’t visit these places very often. I last visited Aushwitz near Krakow, Poland over six years ago.