Robbed in Berlin: I lost my iPhone!

After finally getting an iPhone in December (thanks Mom & Dad!), it seems we were not meant to me. I was robbed in Berlin two weeks ago and my iPhone was stolen in the kerfuffle. Well, it wasn’t really a kerfuffle…more like a quick grab-and-go. Sad story.

At 23:05 on a Wednesday evening, after a delightful reunion with some friends, I was on my way home. At the Hermannplatz u-bahn (a pretty popular square and interchange in Berlin), I decided to walk the short distance to my apartment rather than grab a bus or wait for another train. Not more than a hundred meters from the platz, I was walking down the street when lo and behold, my iPhone was quite literally snatched out of my hand. Turns out there’s a word for that: Apple picking.

Here’s what happened. I was walking briskly down the street (even in April, it’s still damn cold in Berlin!) when a man standing at the sidewalk grabbed my phone. By the time I’d turned around and yelled “hey!” he had slipped it behind his back and into the hands of another guy behind him. All together there were five of them. I couldn’t tell where my phone had gone and then before I knew it, they were off. Running down the street and around the corner. 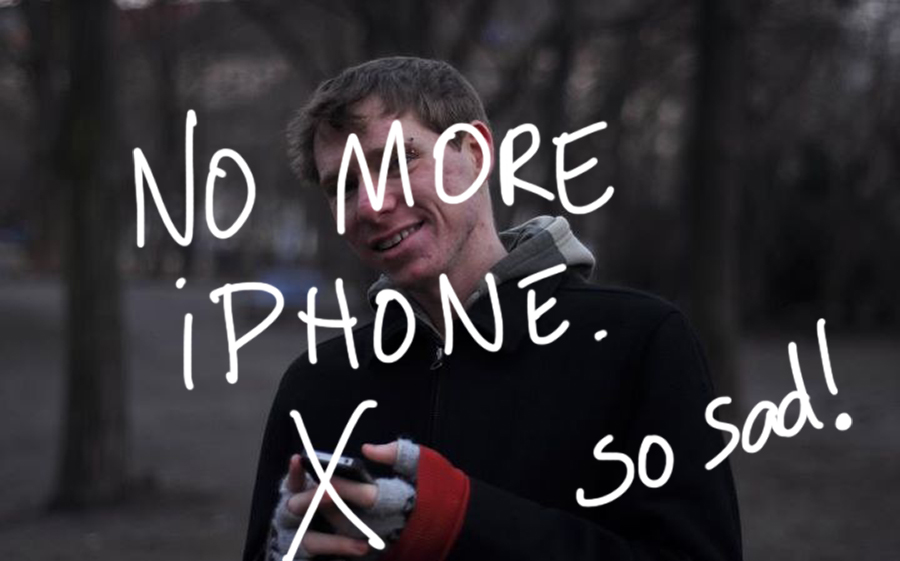 Understandably, I was in a bit of shock. Though I’d just come from a nice night out with some friends, my emotional stress level was already high. I was sad, sick and felt more-than-a-little destroyed from a less-than-stellar day (week). With my phone being pulled out from my own hand… well let’s just say it didn’t help my mood. I couldn’t nor wouldn’t run after them. It was late; I was tired. And in the bag at my side was my passport, my German visa paperwork and my very expensive laptop. So really, they got the cheapest thing on me. But still.

Thankfully there was a woman standing nearby who saw much of the whole thing and she promptly dialed the police for me. Just a few minutes and they’d arrived. I got in the police car (how exciting! I thought). We drove in the direction that the robbers had gone, hoping I could spot them. After 5-10 minutes of driving around Hermannplatz and Neukölln, the officers drove me to the local Neukölln police station so I could make a statement.

I had to wait for a civil police officer to show up so I could file the report. By now it must’ve been 23:30. Not sure if it was good or bad luck, but I had my passport and all my official German paperwork on me so that made things slightly easier. I described what happened in extensive detail (as much as I could remember) to the officer who simultaneously translated it into German. She even lent me her iPhone so I could quickly change a few passwords to make sure the robbers couldn’t get anything of my iPhone. I’ve never filed a police report (I suppose I’ve been lucky) so it was an interesting experience—still one I’d rather not repeat, though. I didn’t make it home until nearly 1:30am and then had to go into work the next day. Life goes on.

Perhaps my luck has finally run out

And I’m iPhone-less once again! Though it sucks to have been robbed in Berlin, I’m pretty much over it by now. I won’t lie that it dampened my feelings about the city immediately, but luckily I have excellent friends and a lot of support here (and abroad). So any stress or worry that I might have had is now gone. For almost two weeks now, I’m officially without a phone (no SIM card, no Instagram…nothing!). And I actually kind of enjoy it. There’s no reading e-mails on the u-bahn or tweeting and checking-in when I’m out. Maybe not the best way to do things as a blogger, but I’ll power through.

I’ve had an exceptionally lucky few years—from winning travel contests to finally getting residency and a visa that allows me to live in Europe (well, Germany). Maybe this was just the world trying to balance things out a bit? I’m actually quite okay with that.

I won’t lie that I was pretty stupid with some things regarding my iPhone. I certainly used to take it out fairly often (umm….always?) in public—on the train, while walking on the street. I don’t think I ever went more than 6 minutes without touching the phone. Besides that, I also never installed the “Find my iPhone” app which the police could certainly have used to track it down. Nor did I have a password for the lock screen.

Apparently this happens regularly in Berlin—especially Neukölln. The officer told me that there’s a report like this nearly every day. Not only that, but just the week before this happened, two friends had their phones stolen out of their bags at a bar in Neukölln. When I moved to Berlin, lots of people told me this area of Berlin was unsafe. Even now with my iPhone stolen, I still don’t agree. Just bad luck. Maybe it’s a bit more prevalent in Neukolln than other areas of Berlin, but I wouldn’t go judging or disregarding an entire neighborhood simply because of it. Life goes on. It’s an experience.