Sending a postcard from the Vatican

The afternoon I spent hanging out in the Vatican was nothing short of spectacular. From Michaelangelo’s Pieta which was unbelievably stunning to the majesty of St. Peter’s and the grandiose atmosphere of St. Peter’s Square out front. I didn’t particularly want to love the Vatican City, but it honestly was amazing. And as I was exiting, things got even more…cool.

The thought never once crossed my mind that the Vatican is its own country (well city-state). And as I walked down the steps of St. Peter’s and noticed the giant yellow post boxes, it hit me! I was in another country! Of course, I’d already been in Italy for over a week…and I walked past plenty of post offices. But this was the Vatican! So in I went, and four euro fifty later, I had two postcards ready to send to America. 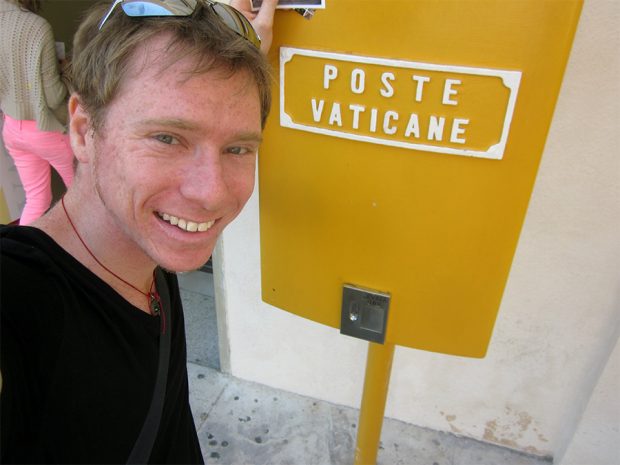 I used to regularly send postcards home but that’s happened a lot less. With the ability to do your own postcard printing (with your own images) through companies such as UPrinting, or even “digital postcards” through apps like Postagram, sending postcards while traveling is less and less popular. Social media is no doubt the best way to stay in touch while abroad, but there’s no souvenir quite like a paper postcard.