Learning German in Berlin — The Good & The Bad

I’m currently enrolled in a 2-month German course in Berlin but am also self-studying with a free trial version of Rosetta Stone’s TOTALe online software. I’m sharing my story about learning German in Berlin on my own blog, and on the Rosetta Stone blog. 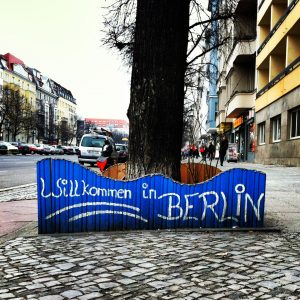 Before I moved to Berlin all I ever heard was how multicultural, creative and international the German capital city is. Stepping off the plane and through immigration, I was more than a little worried. My knowledge of the German language didn’t go past “kindergarten” and “gesundheit.” I was able to mime my way through immigration’s questions—I was only planning to be in Berlin for a short holiday.

Natürlich, that’s not what happened. My one-week vacation in Berlin went fast and by the end of my first week I had a solid plan of how to stay longer. I found a job, an apartment, a visa and then quickly made some friends and set about to turn myself into a German. That meant any number of things: from sitting while peeing (ugh) to listening to the radio every morning in the shower. Today, the cultural habits I’ve picked up as an expat in Berlin have definitely helped with my studies trying to learn German.

Setting out to learn German in the German capital, you’d think your chances are pretty good. This city should be the heart of German culture, right? Wrong. Berlin is an über-cool city and because of that, it attracts visitors, tourists and expats from around the world. Some neighborhoods in Berlin are famous for their long-time Turkish immigrants and there are definitely parts of the city where you can easily spot different languages on signs and posters—from English to Turkish, or even Spanish and Italian.

The influx of foreign noise makes learning German in Berlin a challenge sometimes. When you’re at an event, you may not be surrounded with as much German as you’d like to hear and the ease of which it is to fall back onto your Muttersprache (mother tongue) can be a hindrance to learning German. At least in Berlin. That’s why I’ve started traveling around Germany more frequently—to get outside my comfort zone and try out my poor language skills in places I’ll likely never see again. It makes it easier for me to embarrass myself.

The best part about learning German in Berlin has been the challenge. When stepping into a cafe and trying out my new adopted language, the cashiers regularly default to English with me. Nein, danke! Ich möchte Deutsch sprechen. (No thanks, I want to speak German!) Usually they’ll continue in English, but I’ll just power on through in mein Deutsch—not just to see how far I can get, but because it’s rather fun to have a multi-lingual conversation.

Learning German, though, has its advantages. Life gets a bit easier when you know more of what’s happening around you. And when you start to ignore all the impossibly difficult grammar rules, speaking the language can actually be quite fun! It’s my first time learning a language since high school and while I never enjoyed my Spanish lessons as a kid, for some reason, the thrill of learning a new language as an adult keeps me motivated.