Falling in Love with Barcelona

My love affair with Barcelona has been a complicated one. Spain is almost without a doubt one of my favorite European countries, but despite visiting the country a handful of times, Barcelona was rarely at the top of my “love that city” list. On my very first backpacking trip through Europe (as a sophomore in college), I visited Madrid and Barcelona consecutively. I had completely different experiences in each city. In Madrid I covered the major museums—I fell in love with Guernica and realized that the Prado is one of my all-time favorite museums. In Barcelona I discovered a drink called calimocho…and that’s about all I remember.

That first trip to Barcelona where I partied in hostels, drank on the streets and attended a foam party was one of the most memorable trips of my “youth”—even if I don’t remember the details. But ever since then, on subsequent visits to Spain, I just didn’t care to visit Barcelona again. In 2010 I spent a month traveling in Spain and managed to completely avoid Barcelona. I didn’t want to spoil the memories I’d made previously.

However, living in Berlin, I’ve heard over and over again about how great Barcelona is. I understand where these people are coming from: Barcelona has a beach, amazing nightlife and some great festivals—but I still always preferred Madrid. Last weekend, though, needing some sunshine, I decided to give Barcelona yet another chance at becoming my favorite city in Spain. 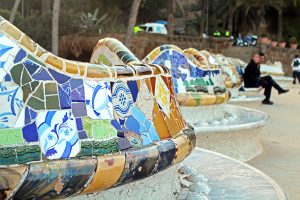 Vueling, Spain’s budget airline, generously flew me out to Barcelona for the weekend. Reading their in-flight magazine on the way, I discovered a handful of cool and hip things to do. My impression of Barcelona before arriving this time around was a city full of douchey nightlife. Clubs playing top 40s or less-than-amazing techno. So the purpose of this trip was to see if I could discover the cooler side of Barcelona. Vueling’s in-flight mag, Ling, certainly pointed me in the right direction. In this month’s edition there was a full feature on one of Barcelona’ many markets: El Mercat de l’Albaceria. Apparently this market has a stall which hosts weekly photography sessions, a “Speaker’s Corner” and serves as a space to connect creatives with professionals. This is the type of Barcelona I was itching to explore. You can read that article (and their entire magazine) online — check it out!

To try and discover the hip side to Barcelona, I booked a stay at The Hipstel hostel. With a name like that I was expecting quite a cool experience. Unfortunately because of the nature of Barcelona backpacking, the hostel was decidedly less hipster than I would’ve liked. Though admittedly they did a good job of embracing the “hipster” philosophy (reminders to be environmental-friendly, use less water, etc). The design was pretty sweet too with old cameras hanging on the wall and Don Quixote on the bookshelf.

The hostel’s recommendations books, however, was far from cool. It basically touted all the usual recommendations for Barcelona. Understandable, I guess, considering that most people are only visiting for a handful of days and have a lot of tourist attractions to see. Having already visited the major sights myself, I opted to try and discover if Barcelona was more than just toned bodies and top 40 music hits.

I met up with a handful of local bloggers and people who read my blog while in Barcelona and got more than enough tips to last the weekend. Everything from chocolate shops to 1€ taquerias. The only thing I had a hard time discovering on this trip were any indie music clubs, but staff at The Hipstel told me they’re working on a “rock music club” tour for later in the year. And after visiting more than enough bars that were pretty cool, I’m sure there’s more of a cool side to Barcelona than I ever imagined. I’ve already put together a FourSquare list of my favorite places—stay tuned for a full-fledged travel guide.

And while my love affair with Barcelona has been complicated, this trip definitely convinced me I really do love this town. It’s got that big, BIG city feeling—with some of Europe’s best shopping—but it’s also quite manageable and easy to get around. There’s a bike-share program, beaches and enough bars to keep anyone busy. It’s also got that distinctly Spanish (yes, I know they’re Catalan) feel with grandiose buildings and wide avenues. But Barcelona is much more than the other cities in Spain because of all that modernism. Last year I wrote about some of the Orientalism you can find in Barcelona. Add all that Gaudi architecture into the mix, some modern luxury skyscrapers and you’ve pretty much covered the full gamut. Barcelona is beautiful—no question about that.

Thankfully the beauty doesn’t stop with the art and architecture. The people aren’t bad on the eyes, either. Exploring Barcelona, despite the economic crisis, it really feels like a city where exciting things can and do happen. This is a city that feels very much alive. So much so that the buildings move and sway in the light, the nightlife lasts ’til daylight and the people are out and about even when the weather is wet & grey (which admittedly isn’t very often). It’s hard not to fall in love with a city as beautiful and exciting as Barcelona.

Check out flights from Vueling online. They’re honestly one of my favorite budget airlines in Europe. You can read my review from the first time I flew with them last year, here. Also, expect a full review of The Hipstel hostel coming soon.