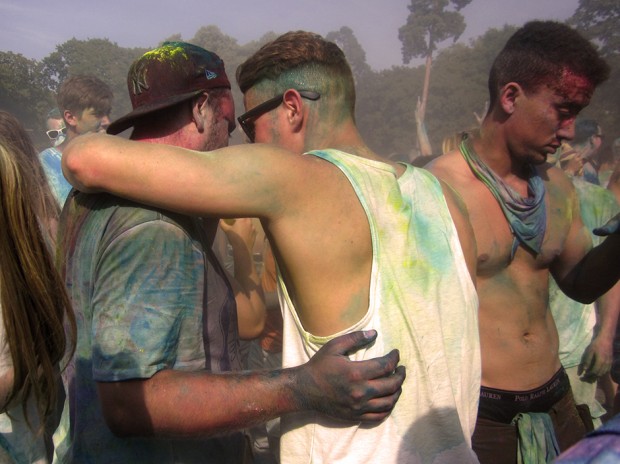 Yesterday was the Berlin Holi Festival of Colours and I managed to snag a free pair of tickets from an online contest. Probably Berlin’s most colorful party, it’s a party organized by some promoters in Berlin. Holi is a Hindu religious festival typically celebrated on the full moon in February or March to commemorate the spring season.

The promoters behind this party (and there are several other Holi festivals throughout the spring and summer in Berlin), have essentially taken the themes (and colors) from the traditional Holi festival to make a party. You buy small bags of dry paint (2€ per color, or 10€ for 5) which you then essentially paint the world with. Take a handful of dry paint, throw it up in the air and let it color you and the people dancing near you. Lots of fun.

Yesterday’s open-air party featured international DJs and all the trappings of a typical music festival: festival foods, portable toilets, strict restrictions on what you can and can’t bring inside… Naturally: I loved it. The party lasted from the early afternoon until 10pm, which is a long time (and probably more than you need). If you plan to go to a future Holi Festival of Colour open-air, I’ve got some recommendations:

Berlin Holi Festival tickets start from 16.99€ and prices on the inside are typical of other music festivals (approx 3€ for small, cheap beers or water; 4-5€ for food). They’re held in cities all over Europe, so be sure to check their website for an upcoming festival near you.