Graffiti at the East Side Gallery

The remnants of the Berlin Wall at the East Side Gallery are consistently vandalized with graffiti. This famous mural has been overwritten with homophobic graffiti

This is one of the more famous murals from Berlin’s East Side Gallery. The attraction is one of Berlin’s most important tourist sites. Today, thousands of tourists visit the location every day. The sidewalk along Mühlenstraße is consistently crowded and packed with photo-snapping tourists. The East Side Gallery is the longest stretch still standing of the former Berlin wall. Shortly after the ’89 fall of the wall, artists were invited to paint political murals on the remnants—creating the world’s largest open air gallery. It’s an important site in Berlin’s history then and now.

The photo above (which I took yesterday when visiting) is of the mural “My God, Help Me to Survive This Deadly Love” by Russian painter Dmitri Vrubel. It was originally painted on the wall in 1990. Due to the fact that many of the 1990 graffiti murals were destroyed over time by weather, erosion and vandalism, Vrubel repainted the mural in 2009 (with the support of the Künstlerinitiative). The mural is almost an exact replica of a 1979 photograph taken of two famous East German and Soviet Union politicians in a fraternal embrace. As you can tell from the photo above, the mural has again been destroyed by graffiti and vandalism.

When I first visited the East Side Gallery on my very first trip to Berlin, the murals were in fine shape. Sure, there were scribblings and small tags by tourists and passers-by, but overall the works of art seemed to be in relatively good shape. Over the past few years, however, it seems the works of art have been left in disrepair. Despite being one of Berlin’s most important tourist attractions, it seems no one is able to responsibly care for what has been called the world’s largest open-air gallery.

It’s incredible to think that such an important reminder of Berlin’s history, Germany’s history—hell, even our world’s history—has been left for dead. Walking along the East Side Gallery yesterday, I was hard-pressed to find a single mural that hadn’t appeared to have been destroyed. Perhaps most upsetting for me was Vrubel’s mural. Apparently, according to this blog, the “Stop Homophobia in Russia” tag appeared around the same time as the corresponding demonstration in Berlin. Shortly thereafter it seems (and first spotted on this page), the “faggots” tag appeared over the artwork.

I believe restoration of the East Side Gallery is badly needed yet again. Berliners and tourists alike must feel some sort of ownership over the gallery, the wall and its legacy. When visiting tourist sites such as these, it’s important to remember the past, and to think of the future. For a tourist site as important as this one (we must not forget our past), the East Side Gallery should receive greater respect than it is currently being given. 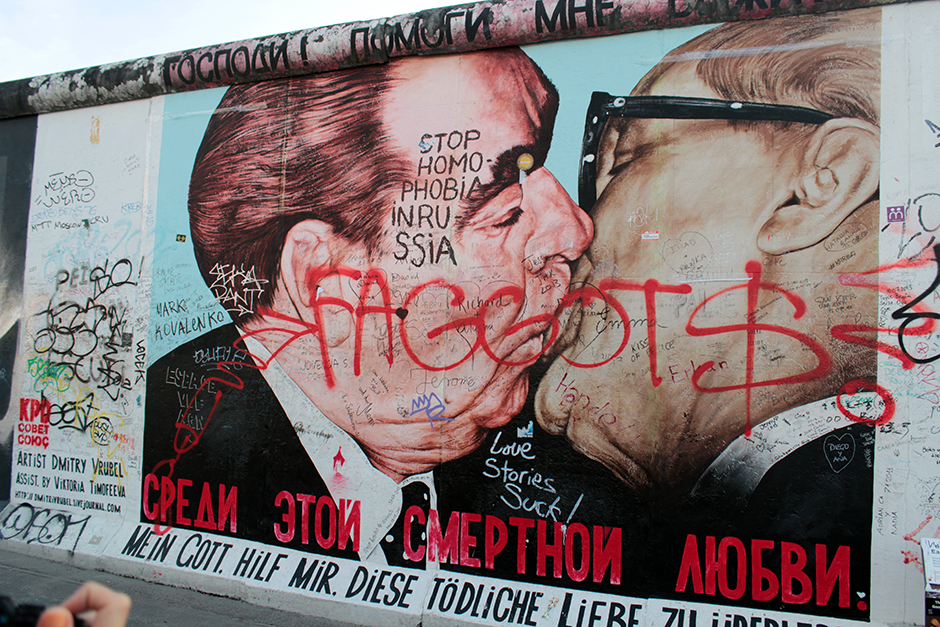