Knightsbridge in London: Where to Stay for High Street Shopping 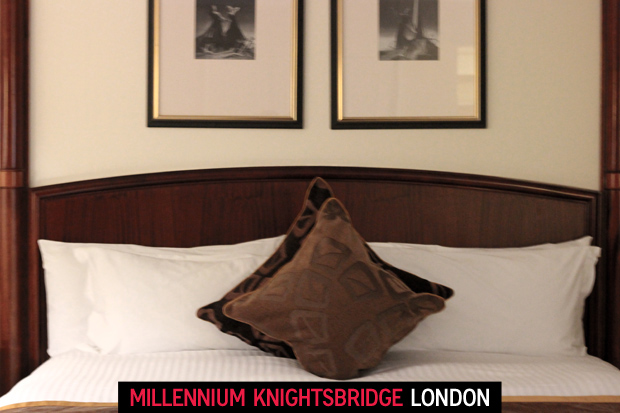 London is one of those cities where each area/neighborhood (or is it borough?!) has its own special appeal. In the Kensington borough, the central district of Knightsbridge has a very particular (and expensive!) appeal: the several blocks in this area are all about shopping!

Knightsbridge sits just south of Hyde Park and includes some of London’s most famous shops. Perhaps most notably is the legendary Harrods department store, but most major fashion labels have a store in the area as well. Options for accommodation in the fashion district aren’t as diverse as in other areas of London—probably because the real estate seems to be almost exclusively for commercial shops!

The Millennium Knightsbridge hotel, however, is conveniently located in the Knightsbridge district. Most reviews of the hotel give it high praise for its prominent location…and rightfully so! The hotel is just steps away from Harrods and sits directly on Sloane Street—putting it right in the heart of Knightsbridge’s shopping district.

Knightsbridge conjures up images of shopping bags and high-end fashion for most visitors, though it’s also within walking distance to some of the best London museums. Staying in the Kensington/Knightsbridge area of London I was able to not only get some necessary shopping done, but I also managed to fit in a visit to the Victoria & Albert Museum (less than a 10-minute walk from the hotel). Always good to mix in some culture with commercialism!

Another thing I was pleasantly surprised to stumble upon in the area was the Ecuadorian embassy. Famously, the embassy (or in Britain it’s called a High Commission) houses Wikileaks founder Julian Assange. One night there were even a group of Wikileaks supporters holding a small demonstration across the street from the embassy.

The hotel lobby was strangely small and never empty, though it wasn’t loud or crowded either. The staff were always incredibly friendly.

I stayed in a deluxe room (with a balcony, no less!), and so I ended up with quite a large space. Which incidentally gave me plenty of room to make a mess and try on all my new clothes. (Sidenote: while Knightsbridge might be brimming with luxury retailers, I still did all my shopping exclusively at H&M, Topman and Primark.)

When checking out, the woman at the desk was even so kind as to let me get away without paying for a Snickers bar I had nicked from the mini bar the night before. Here’s the gist of that conversation:

Her: Did you have anything from the mini bar?
Me (getting my coins ready): Yes, actually. A Snickers bar.
Her: Anything else?
Me: Hah, no. Actually… that’s kind of embarrassing isn’t it?
Her (with a smile): Haha, no not at all! We’ve all done it… Don’t worry about it.

Hard not to leave the hotel with a smile after that!

Rooms cost upwards of £200 per night and though the style might not be contemporary, the rooms provide enough charm to remind you that you’re in London. I’ve previously stayed at the Millennium Gloucester hotel location and this one was comparable.

And even if the hotel rooms don’t have a modern design, the restaurant certainly does. The Tangerine Cafe & Bar in the lobby was always comfortably full in the early evenings and had a contemporary feel to the design…without being stuffy.

Would I stay in this hotel again? Maybe. Probably only if I was going on a shopping trip in the same area of London, though. And even then it’d have to be because I would’ve hopefully won some sort of huge windfall and had the chance to actually spend money at Harrods. This time around I just couldn’t afford a £300 shirt and instead ended up scouting for free samples in the Harrods Food Hall.

Disclosure: I was a guest of the Millennium Hotels during my stay.