Rome For a Day

Traveling to Rome for just one day? Check out my travel tips. It's possible to do some sightseeing, enjoy good food & still relax and enjoy Rome, Italy

Okay, well in all actuality I was in Rome for slightly more than a day — just under 36 hours to be precise. It wasn’t my first time to the Eternal City, though, so I wasn’t feeling much pressure to see all the sights. This time around was just about eating well, having some fun and discovering some cool and hip hotspots. Here’s what my day in Rome looked like: 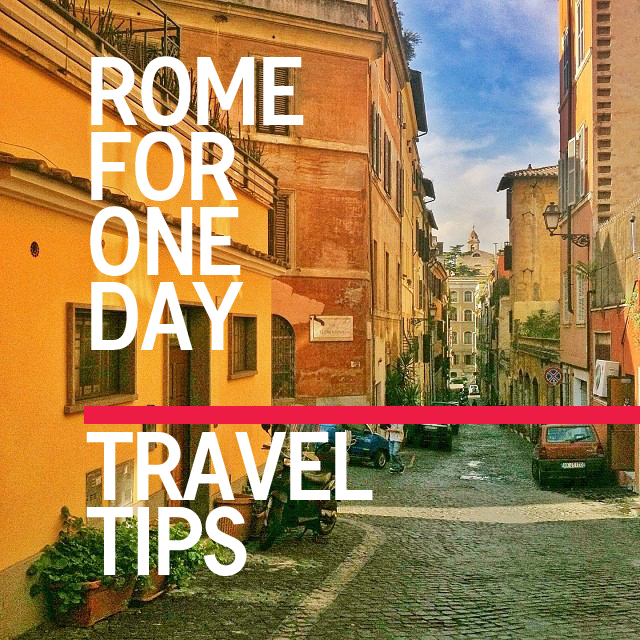 ROME FOR A DAY, HEY!

12:30pm — Arrive via train from Florence

Since I was only staying in Rome for a single night, I opted to stay at one of the many cheap hotels and hostels near Roma Termini station. The main train station is massive and just to the northeast are countless 3-star hotels and backpacker hostels. I stayed at The Yellow Hostel which was significantly better than the hostel I’d previously stayed at in Rome (this one).

The Yellow staff were super friendly, there were signs everywhere promoting their events and social media and the lounge area was comfortable and relaxed. They told me when checking in that the entire hostel should have super-fast wifi, but whether because of my bad luck or the fact that Mercury is in retrograde, my room didn’t have any. But probably my favorite part of the hostel (read the full review) was the fact they had several signs up about “love is love” and little drawings of same-sex and heterosexual couples holding hands. Yellow Hostel isn’t a “gay hostel” but they were certainly welcoming!

Last year when I was visiting, I discovered Rome’s most famous street food: suppli’. It quickly became an addiction and now I look out for it whenever I’m at a pizza restaurant. So my first order of business after dumping my bags was to find some suppli’ and a slice of pizza (pizza al taglio). Lazy, I stumbled into a pizzeria nearby my hostel Antica Pizzeria del Secolo. The guy inside was super nice and even rounded down the price for me because I didn’t have small change.

After filling up on the fried goodness that is suppli’, I decided I should probably snap some photos of a few Rome attractions just so that my Facebook friends could be jealous. First stop was the Colosseum and Piazza Venezia. I also took the afternoon to stop and have a coffee at Rome’s most famous gay bar, Coming Out. It’s located across the street from the Colosseum.

Last year when I was in Rome I discovered what a great shopping mecca the city is. Via del Corso and Via dei Condotti are both the main shopping streets, for budget-friendly deals and high-end fashion respectively. I stuck to Via del Corso obviously and went into the Alcot.eu shop to look at jeans and sweaters.

After window-shopping I walked a few more blocks to revisit the Trevi Fountain. There’s that famous Rome tradition where you’re supposed to drop a coin or two in so that you’ll return to Rome. And seeing as how my wish had come true and I had found myself once again in Rome, I decided I owed the gods at Trevi Fountain a visit. It was too crowded to really enjoy it, but nice to see it at dusk regardless.

After that I walked over to the Spanish Steps just to round-out my day of tourist overload. The guys selling random flying objects and sticky balls were out in full force.

Having heard repeatedly how cool the Monti neighborhood of Rome is, I opted for dinner up on the hill. My friends from Italy Tours and Heart Rome recommended L’Asino d’Oro, an Umbrian restaurant on Via del Boschetto. After several hours, a bottle of wine and some amazing Umbrian food, I was ready to call it a night! But not before checking out some of the bars and piazzas around Monti. Piazza della Madonna dei Monti was crowded with young locals and students. Everyone was buying drinks at the convenience store opposite the fountain and just enjoying the warm October evening. It was the perfect place to end a packed day of sightseeing, shopping and eating in Rome!

Skipping the offerings at my hostel, I went out in search of a real Roman cafe to get that oh-so-typical Rome breakfast: cornetto & cappuccino! It was a small place and I managed to do it in true Italian fashion: it can be a rather complicated process in Italy when ordering coffee!

A single shot of espresso, while nice, wasn’t enough for me so I went straight to a place I’d seen the night before but didn’t get the chance to check out for myself: 2 Periodico Cafe. It’s probably the most hipster place I spotted in the Monti neighborhood. On evenings they put on concerts and shows; during the day it’s a great place to find free wifi, snacks and good drinks. I sat there for a few hours until lunchtime, when I decided to pick up a foccacia sandwich at the nearby bar, Full Monti.

Sitting by the fountain in Piazza della Madonna dei Monti with my sandwich and an Italian soda from Full Monti, I finally realized the real beauty of Rome. It’s such a mesmerizing city with its pockets of culture and lively people. There was a woman playing an acoustic guitar, crowds of tourists coming and going and a woman in a black-and-white polka dot dress posing for a small photoshoot. She had that Audrey Hepburn hairstyle and the red stilettos. This is the image of Rome I always dreamed of. And there it was right in front of me!

Having not found many clothes on Via die (co03eri) the day before, I’d heard from friends to try the boutiques in Monti. Up and down Boschetto Street there were shops selling just about everything. An bookstore with historic posters, a t-shirt shop, and more than a few mens boutiques. Boscetto Street was my favorite store, with brands like Scotch & Soda and Englishman in New York. Though it was around the corner from Boschetto Street at a small boutique on Via Leonina that I found what I was looking for: a new wallet. I snagged a black wallet made out of a bicycle wheel from Mnmur.

Getting the train from Termini Station to the Rome airport, I couldn’t help but dream of another visit to the Eternal City. Rome used to be a faraway place. It was something I’d read about in my history books. It’d pop up quite often when studying art history and, in the movies, it always looked like a dream. Sitting on the train though, listening to the pre-recorded announcement while we were about to depart the station, Rome suddenly became something more. It’s a living and breathing city. No wonder they call it eternal. This city was built to last. And even if just for a day, it’s hard not to notice how important it is and will continue to be.

While Rome may seem like a faraway place, a destination for just once in a lifetime, it’s actually quite easy to get to and from. Rome Fiumicino airport is serviced by countless budget airlines. If you’re looking for cheap fares, I can highly recommend using Dohop.com to find flights. Based in Europe, their search engine turns up flight routes I wouldn’t normally be able to discover.

Have you ever returned to Rome? Or was it just a once-in-a-lifetime kind of place for you?

WIN A TRIP TO ROME

Well isn’t this lucky?! An eco-friendly hotel & hostel has partnered with Eating Italy Food Tours to give away five nights accommodation + 2 spots on a food tour + gift card for shopping in a gourmet food shop. Learn about the contest and enter it here.