My First Impressions of the Scottish Countryside

No, really. Despite all evidence to the contrary, Scotland’s scenery is absolute stunning. The seemingly endless drizzling should be an hindrance, but in reality—it just adds to the magical mystery that makes up the Scottish countryside. Who knew that somewhere so wet, so grey, so foggy & cold could be so stunning?

The wet weather means green grass (and plenty of moss). The foggy grey skies might make the countryside appear spooky but that only adds to the Scottish atmosphere. The many shades of grey that make up the Scotland countryside only emphasize the other colors that do exist. The Tartan kilts, the grassy green knolls, the pastel-painted houses, the black slate and the amber whisky. Scotland is lovely. End story.

TRAVEL TIP: TAKE A BUS TOUR! To get outside of the Scottish cities, consider a tour with companies like Rabbie’s Travel or Haggis Adventures. These group tour buses are a great way to get to hard-to-reach destinations as far north as the Isle of Skye…but they’re also handy for visiting whisky distilleries, castles and scenic outlooks. Check out Rabbie’s Tours of Scotland here. 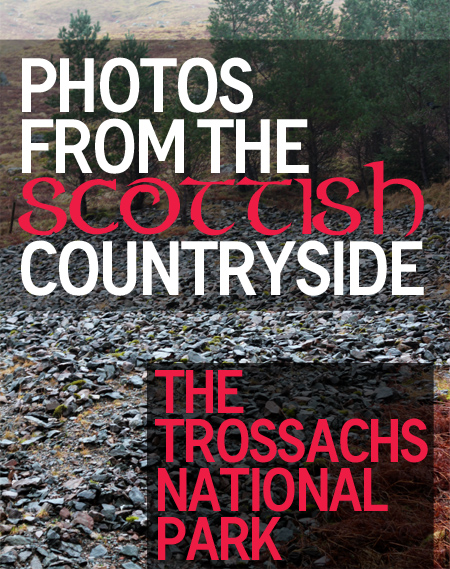 Scottish Words to Know & Their Definitions 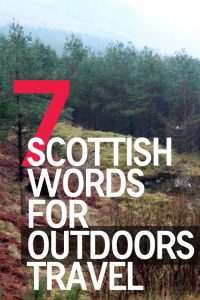 One thing I learned during my first trip through the Scottish countryside is that not only is this a whole other world than I’m used to, they’ve got an entirely different language here! It’s called “Scots” but it’s not actually taught in schools. And even though Scotland is currently part of the UK, that doesn’t mean they speak English here. I thought it bizarre the first time I heard someone speaking Scots because I just didn’t realize the accent and dialect would be so hard to decipher.

I’ve only really traveled around the Trossachs region of Scotland’s countryside, so without witnessing the majestic glory of the Isle of Skye or the picturesque Highlands, I can’t really speak of all the different types of scenery you might find in Scotland, but these Scots words should be a helpful starter guide to Scotland’s scenery (and weather).

Also, two of the most important weather-related Scots words. Trust me: these will be handy when trying to fit in like a local!

TRAVEL TIP: BRING SCOTTISH MUSIC ON YOUR ROAD TRIP! When you’re out exploring the sweeping vistas and the glens, lochs and straths of Scotland, make sure you load up a playlist of Scottish music. And not that silly (but sweet) traditional folk music. Rather…load the cool indie bands you’ll find at the likes of the T in the Park music festival.

If you’ve been to Scotland before, let me know below what you thought of the Scottish countryside. Did you find it as delightfully spooky and darkly charming as I do?

More information about my involvement with the Blogmanay campaign can be foundhere. #Blogmanay is brought to you by Edinburgh’s Hogmanay and is supported by ETAG, EventScotland, Homecoming Scotland, VisitScotland, Edinburgh Festivals, Marketing Edinburgh and co-creators Haggis Adventures. Created and produced by Unique Events. As always, all opinions expressed here are entirely my own.