Contemporary Dance at Edinburgh Fringe: Boys Who Like to Play With Dolls

I haven’t seen many contemporary dance performances in my life, but every time I have, I’ve come away with this strange, surreal feeling: a lightness and an awkward happiness. There’s something special about contemporary dance—the music, the movements, the bodies. In Edinburgh the other week, I booked myself in to catch the dance performance “Boys Who Like to Play With Dolls” as part of the Edinburgh Fringe Festival. 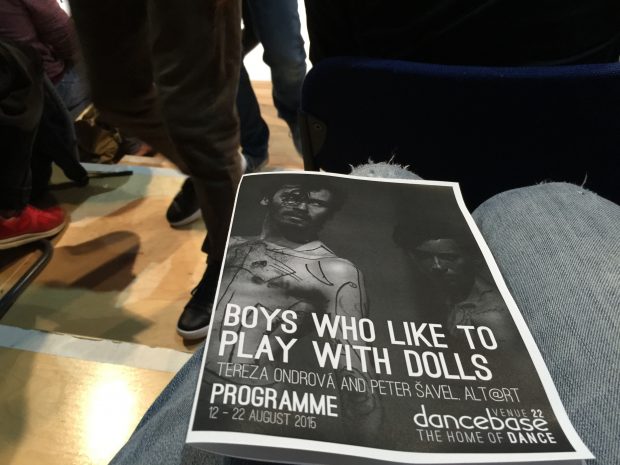 This unique performance was a gender-bending display of how masculinity and femininity can be unrelated to the male and female physical forms. Two Czech dancers, Tereza Ondrová and Peter Šavel moved around the dance space with a fluidity I’d never seen nor experienced before. Their moves morphed from one body to the other, forcing the viewer to see gender in a new way.

As I entered the studio, the two dancers were sitting on two metal chairs, mumbling for several minutes in a crescendo until all other sound stopped and the dance began. Their genders weren’t necessarily distinctly noticeable—though of course you saw them as one man and one woman, it wasn’t until they accentuated their genders that gender was recognizable. The way they walked and the extreme accentuations of each other’s genders made it unusually interesting. The music came in and out in fluctuations, just as their genders. They sang, they moved like gorillas. The way they used their bodies didn’t just show gender, it showed what it means to be human.

The performance ended with them bringing their two stools into the audience, sitting amongst the crowd as they were singing. The lights went off, the sound stopped. I never felt more like a human being.

He was she, she was him, they were me, I was them. We were one. It was an empowering feeling. To feel human.

A sample from the performance: Boys Who Like To Play With Dolls

Gender is a popular topic these days, with trans rights becoming a bigger issue in the LGBT rights movement. With this performance, and that of the Trans Scripts play, it’s easy to see that we live in a more special world—one where we can be what we want, what we deserve, what we are. I don’t know if I live in a bubble—a large, cosmopolitan city where I can be whatever I want to be, free of judgement, of stereotypes, of societal norms. But I hope that I’m not in a bubble. I hope that this is a worldwide movement, that we as a collective human race are recognizing more of our own individual freedoms—and that our world & society is finally giving us the chance to act and be how we are.

The “Boys Who Like to Play With Dolls” dance performance has been presented at other festivals in NYC, Sweden, Greece, Russia, Slovakia and Czech Republic — follow their Prague studio’s Facebook page for future updates. Photos by Maria Falconer.

Special thanks to Edinburgh Festivals for their support during my stay in Edinburgh. Visit www.edinburghfestivalcity.com for more information and to buy tickets for festival events. More information about the Fringe Festival can be found on their official website, www.edfringe.com.