The Coolest Things To Do in Manchester

Lonely Planet released their annual “Best of 2016” list, and of the top 10 cities to visit next year, they included Manchester—a city I visited for the first time this summer.

I first “discovered” Manchester when I started binge-watching Queer as Folk. It felt like a rite-of-passage after coming out, a way to learn about the new queer life I soon found myself actively engaged in. When watching the British version of the popular TV series (which originally aired between 1999-2000), I was often more interested in Aidan Gillen’s shenanigans (and butt) than the city scenery, but I guess the idea of “Canal Street” always stuck with me. When the producer and screenwriter of Queer as Folk, Russell T Davies launched a new series of TV shows on the UK’s Channel Four at the beginning of 2015 (Cucumber, Banana and Tofu), Manchester popped back up on my radar.

Over the course of my weekend trips to Manchester this summer, I finally did get to discover the city. And it wasn’t just cool like I expected it to be, but exceeded every expectation. The clubs were crazier than I imagined, the people friendlier, the food tastier and the sheer amount of cool, hip places was honestly overwhelming. Manchester’s Northern Quarter, clearly the “hipster neighborhood” of the Northern English city, wasn’t just another attempt at being cool—it was legitimately interesting.

Sure, gentrification is likely an issue, but Manchester still has that independence and authenticity so valued by locals—and by tourists. The shops and restaurants aren’t just there to make a buck, but many of the local businesses are actually contributing back to the society. Even Manchester’s annual LGBT Pride operates as a charity, having donated £146,000 this year alone to LGBT organizations, and over £1 million in the past decade.

Manchester is an exciting, vibrant city with an eclectic amount of things to see and do. That’s why I’ve put together a new Hipster City Guide, which includes over 50 different attractions, places and travel tips to help make visiting Manchester that much more enjoyable. Get the guide here, and read on for some of Manchester’s coolest hotspots…

Where to go in Manchester…

The thing that attracted me most to Contact Theatre is the fact that they purposefully look to feature young artists and new creative talent. But then when I discovered they also host a number of queer and LGBT artists for various performances, art shows and other events, I was instantly sold. Their website lists and categorizes performances and plays by a number of different tags, making it easy to find everything from dance performances to discussions, from comedy to cabaret.

When I visited Contact earlier this summer, I had the chance to meet Kate O’Donnell who performs in Big Girl’s Blouse (a performance commissioned by Contact). In the performance, Kate makes a song and dance about her life using humor, music and costume to tell her story growing up transgender (see the video below). 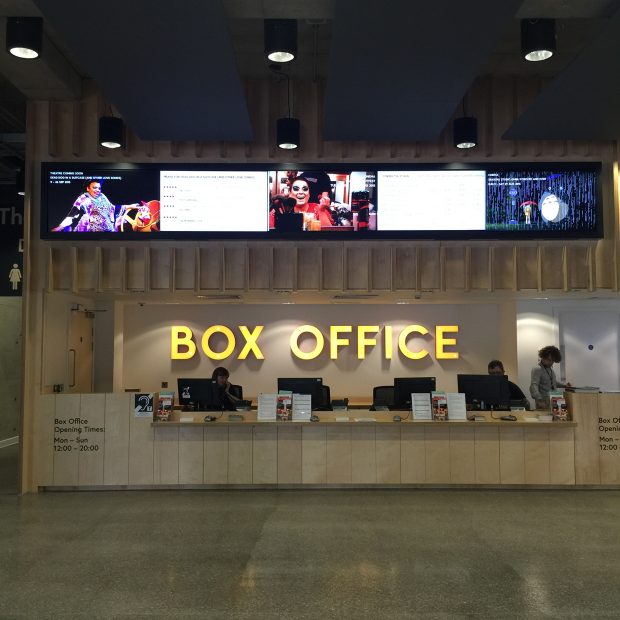 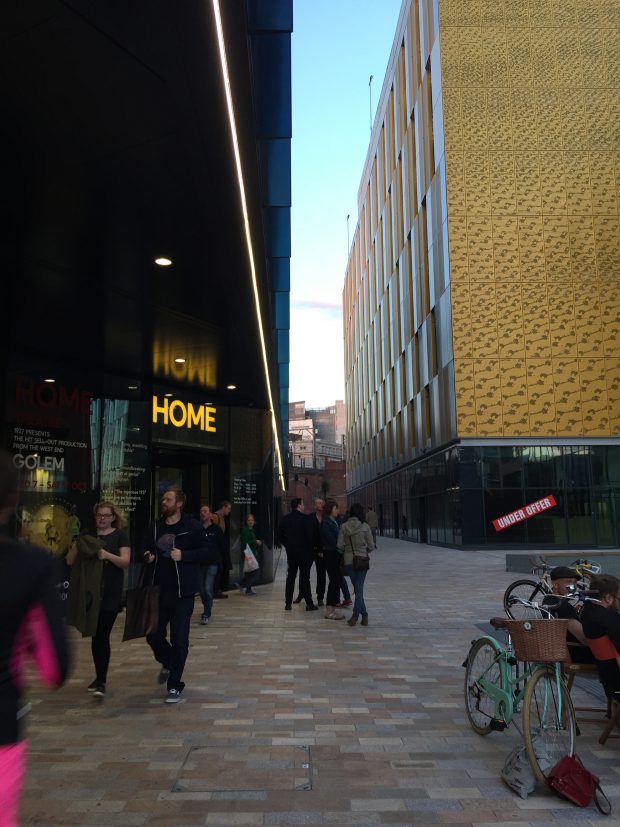 Two local arts organization, the Cornerhouse and the Library Theatre, came together and opened HOME earlier this year. It’s a culture venue that bills itself “for curiosity seekers, for lovers of the dramatic, the digital and the deeply engaging; for radicals and reciprocators.” HOME features two theaters, five screening rooms and art exhibitions throughout the building. They also have a restaurant, café, bar and a bookshop. It’s a place that welcomes creatives, educators, young people and families, all of whom are encouraged to come and get involved by attending screenings, workshops and study sessions.

The new space, located near the Manchester Oxford Road train station, makes art easily accessible—no matter the format. It’s one of those creative spaces that’s meant to be multi-purpose, and actually achieves it.

…for any kind of shopping 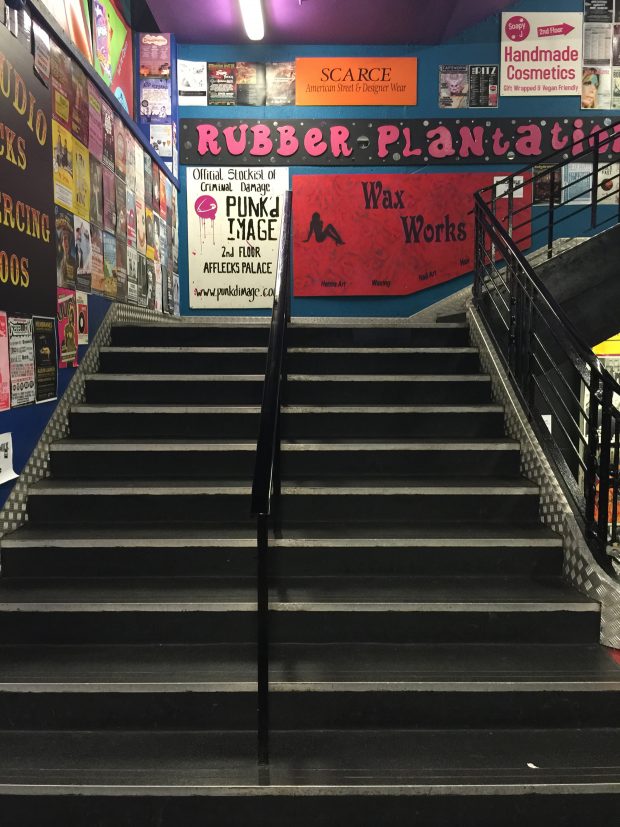 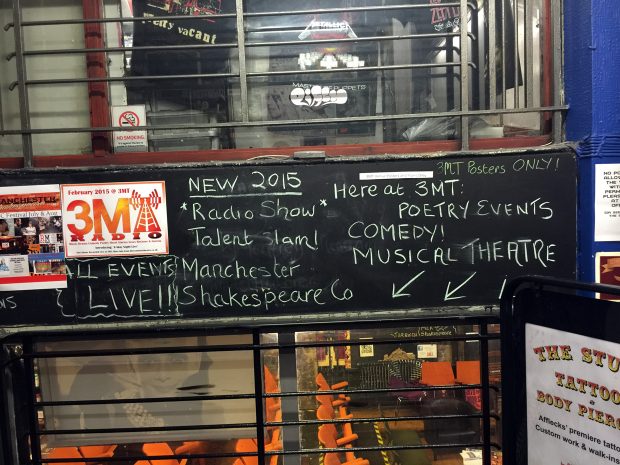 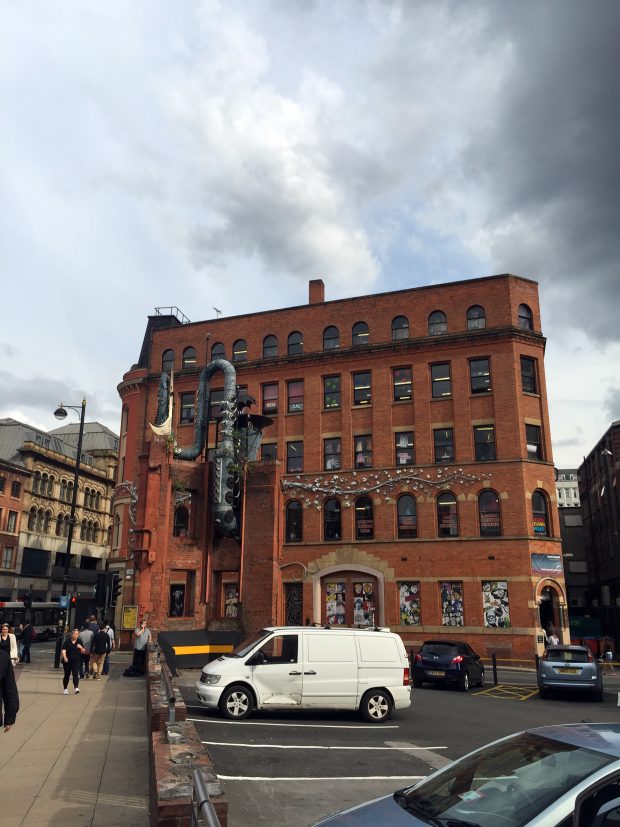 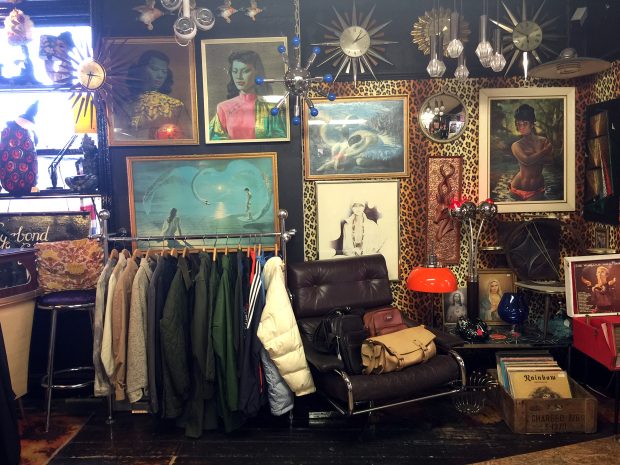 This alternative and rather eclectic department store in the Northern Quarter sells everything from club and fetish wear, clothing from new designers, accessories (like top hats!), henna tattoos, piercings and oddly enough, surfwear. It’s certainly the best place in the city to buy clothes for fun and wild nights out on the town!

Back in 2014, Lady Gaga made headlines when she dropped £8000 in a frenzied shopping spree there one afternoon. The store also offers a creative space for you to paint, write, act or even recite poetry.

…for the best hotel bed ever 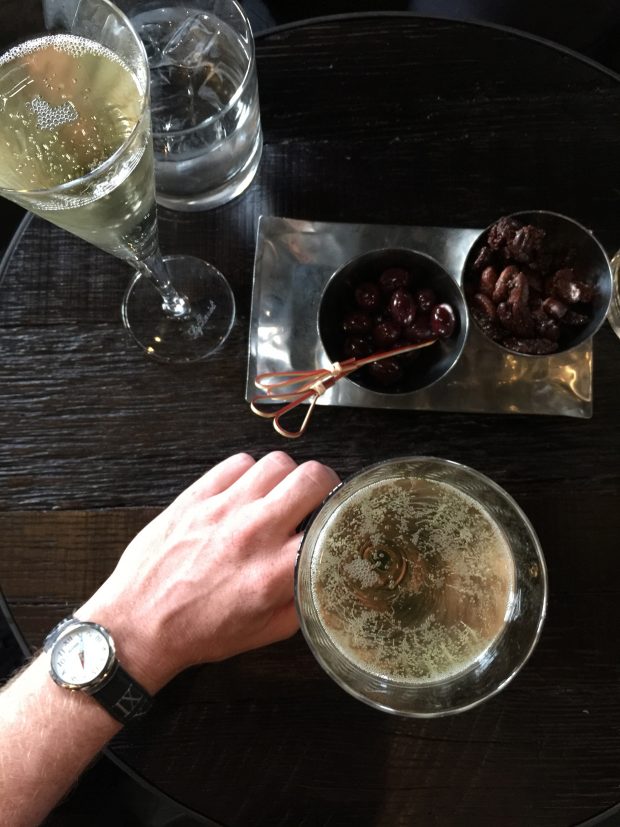 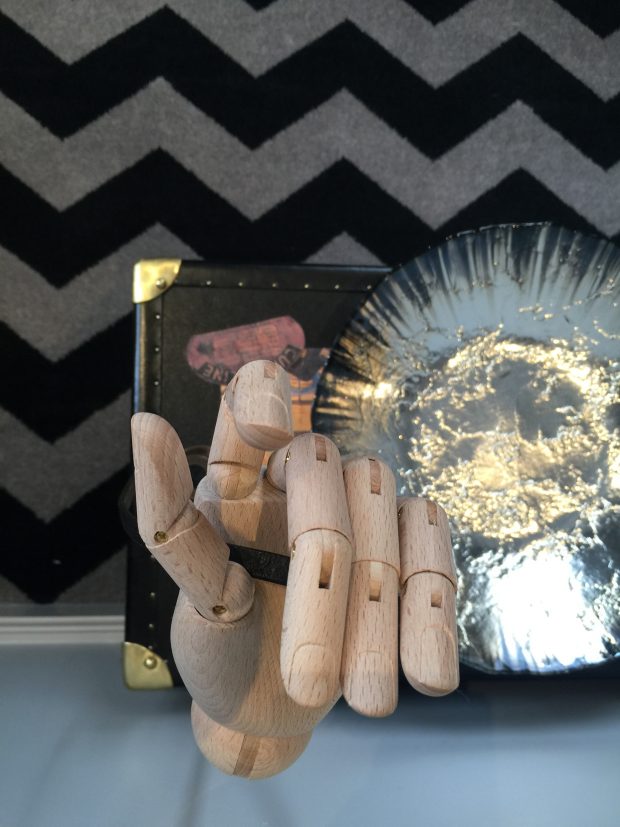 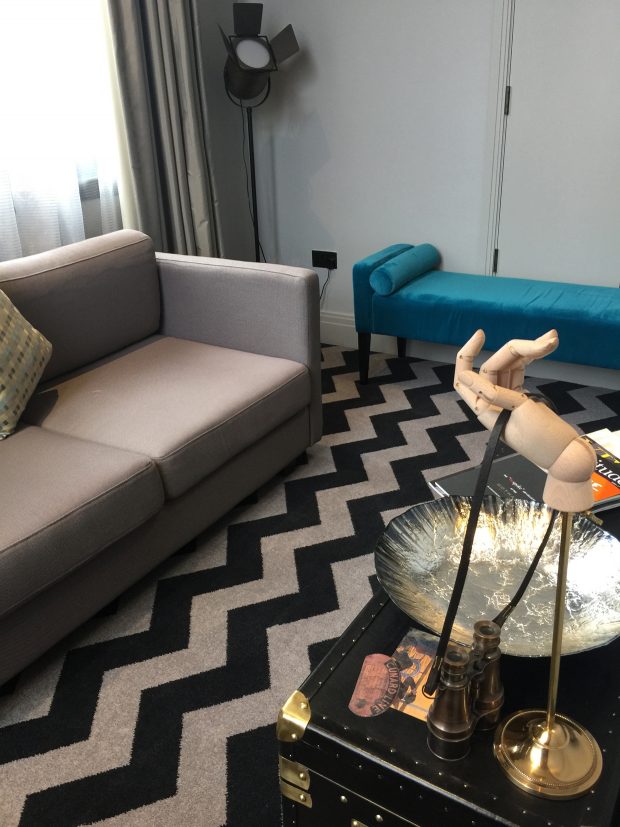 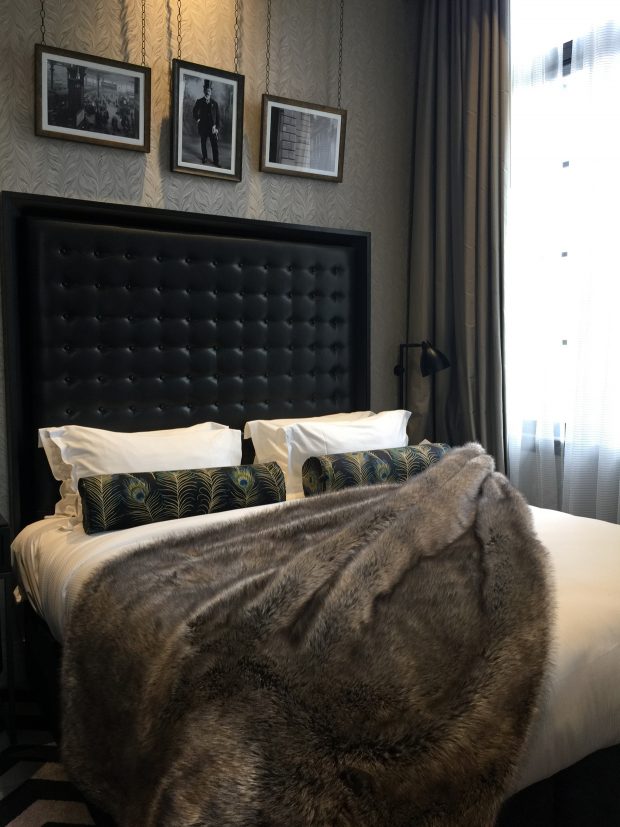 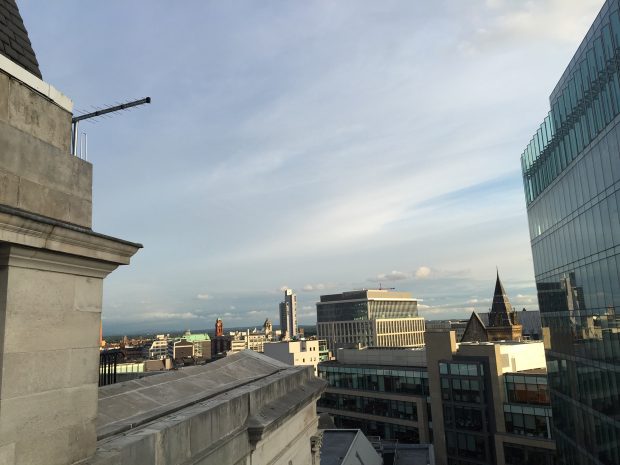 Situated in a former bank building, Hotel Gotham is an opulent, art deco styled, five star, boutique hotel on King Street in the city’s business district, a short walk away from the Northern Quarter. The hotel’s unique design centers around its’ historic past, taking inspiration from 1920s Manhattan and even Batman (hence the Gotham name). The hotel’s 60 rooms offer bright and bold retro styled furniture and large king-sized beds with furry throws. It’s truly a fun place to stay, with Batman “do not disturb” signs on the room doors and binoculars to gaze out the windows.

The beds are some of the most comfortable in the. Inner Sanctum suites within the hotel have no windows, making guests feel that much more posh and enhancing the exclusive nature of the hotel. While some might find this “over-designed” or snobby, the Hotel Gotham maintains a sense of calm and coolness without feeling pretentious.

The sixth floor Honey Restaurant provides an unexpected yet thrilling dining experience no matter what time of day, with appetizers like a prawn cocktail being served in a one foot high glass. The champagne served is the same used at the Academy Awards. The restaurant’s arched windows offer sweeping city views. The rooftop members-only bar, Club Brass, has sweeping views over the city skyline, with balconies that even have telescopes and other ornamental features. The entire hotel feels plush and luxurious—a 100% sensory experience.

…for the best country cooking 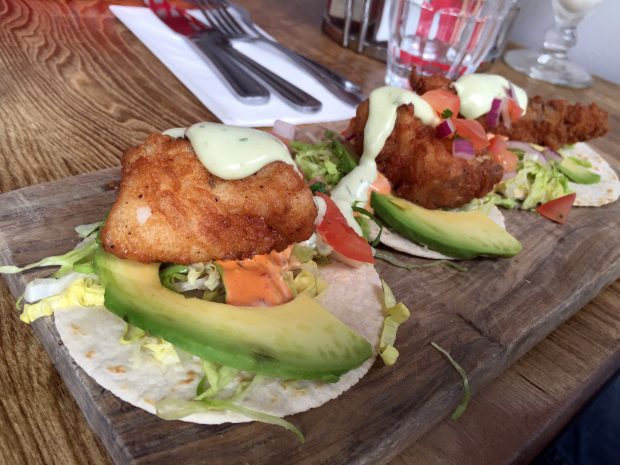 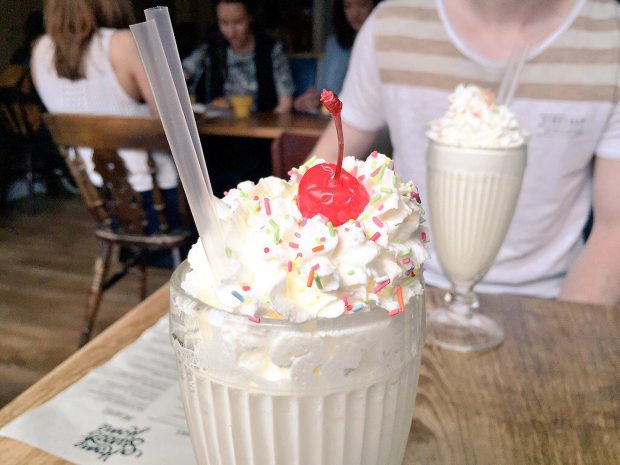 This American themed restaurant serves breakfast, brunch and dinner, seven days a week. Think pancakes, milkshakes, pulled pork sandwiches and loaded nachos. It’s all about the comfort food here, especially when it comes to cake, as Home Sweet Home calls themselves the “bestest little cake shop on the planet.”