Ever since I started visiting Italy regularly, I discovered one important thing about the country’s famous cuisine. Italian food is way more than just pizza and pasta. I grew up on spaghetti and meatballs, lasagna and other classic red-sauce specialities. But on my many trips to Italy over the past few years in Europe, I’ve discovered so much more to the food. Italian food is probably one of my favorite cuisines. And, as an American, fried food is a staple food group in my diet. Put the two together, though, and you’ve got some weird and wonderful Italian foods! Here are my favorites:

Why did no one tell me that fried pizza is a real thing?!? This is sooo good!! And for what it’s worth, it’s not the same as a calzone! It’s called “pizza fritta” and the dough is super soft. It’s sooooo good! ???

Sure, pizza is amazing. But fried pizza?! It’s incredible. I tried fried pizza earlier this year in Naples—that’s where pizza was invented and it honestly blew me away. And when I say “fried pizza,” I don’t mean a really crunchy deep-fried version, but when it’s fresh and made as it’s made in Naples, you get this warm, delicious deep-fried taste with melted mozzarella and tomato sauce joining in an orgasmic combination. It’s called pizza fritta and it’s amazing.

Where to get it? In Naples, of course! You haven’t had pizza until you’ve had it in Naples. No joke.

Just learned that you can fry tortellini and it tastes SO yummy! ? #veronagarda

In Italy it seems, they take their famous foods which have been exported the world over, but here where it’s local, they do really special things with their original recipes. Tortellini comes from the northern regions of Italy, and in Garda-Veneto they’ve perfected a unique style. The stuffed, ring-shaped pasta is often served in Garda-Veneto with butter and sage, but at a pasta factory in the small Italian city of Valeggio, I tried something really special: fried tortellini!

Where to get it? In Valeggio, I tried fried tortellini as a snack at the gastronomy pasta factory Al rey del Tortellino. Valeggio also hosts an annual tortellini festival (can you think of anything better!?!). The local restaurant Ristorante alla Borsa serves many of the traditional varities of the local tortellini. For more information about tortellini in the Garda-Veneto region (including dates for the next food festivals!), check their official website.

In Rome, it’s all about the food ? ‘Tis the season for artichokes! #EatingItaly

Trust me on this! Artichokes in Italy are a whole other thing…something really special. Each winter in Rome sees the season of carciofi alla Giudea. These Jewish-style fried artichokes originated in Rome’s Jewish Quarter and are served deep-fried. They’re crunchy and delicious!

Where to get it? In Rome! I first tasted the local (and seasonal) food specialty on a food tour with Casa Mia Tours through Rome’s Jewish Quarter. The Nonna Betta restaurant (which you can visit on the tour) serves one of the most authentic varieties of carciofi alla Giudea – definitely worth a visit! But remember: this is a winter/spring food speciality so make sure to visit at the right time of year! 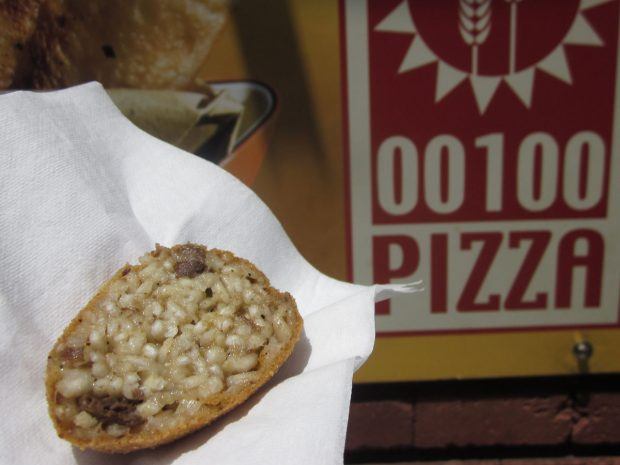 The first fried food I discovered in Italy also comes from Rome. Supplì is similar to arancini (which comes from Sicily), but instead these are typical to Rome. They’re a deep-fried snack food made of a ball of risotto rice mixed with tomato sauce and a piece of mozzarella in the middle or sometimes a mincemeat.

Where to get it? It’s common at pizza restaurants as an appetizer in Rome. But seeing as it’s also a popular street food, you’ll find other vendors selling it as a snack. Look for it in the Testaccio market—one of Rome’s best foodie markets.