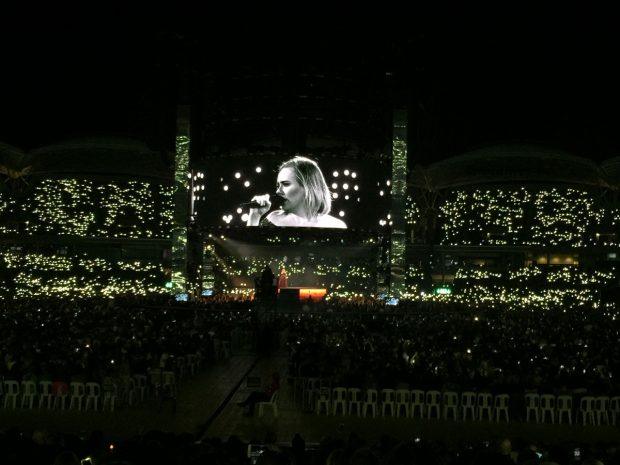 Yep, this is really happening, I thought. I showed up to the Adelaide Oval—the city’s impressive and imposing arena along the riverside—just in time…or so I thought. In fact, there was still a half-hour until my ticket said the show would start (“NO SUPPORT ACT” it warned me). But I wasn’t worried—there were still thousands of people queued up to get inside. Street vendors had popped up along each entrance selling greasy foods. Official merchandise sellers had tables up every few hundred meters hawking Adele’s face on t-shirts, baby onesies and hats.

There were countless couples in the queue—and quite a few other gay guys, too. As I made my way to the entrance, the excitement was infectious. And then inside, when I realized where my ticket had me sitting, I was positively glowing. I made my way to the seats, ground level, center stage. I was worried at first because the ticket said “restricted viewing” but I don’t know what restriction they were talking about.

It must’ve been at least another half hour or more before the show would start—enough time for me to find the bar and buy a nearly $10 beer.

While waiting for the show to start, with nearly 70,000 people in attendance, the Oval was alive with energy. As the sun slowly reached the horizon in an orange glow, the crowd started and stopped a wave a handful of times in one corner of the arena. It did finally pick up, moving through the stadium in at least one full orbit.

And then it happened. The box that Adele has famously traveled in from backstage to the center platform showed up—escorted by security. You could see the audience cautiously watching, waiting. And by the time she appeared on stage, opening with her 2016 hit Hello, the show turned electric. Her gown sparkled, the sky was alive with color. 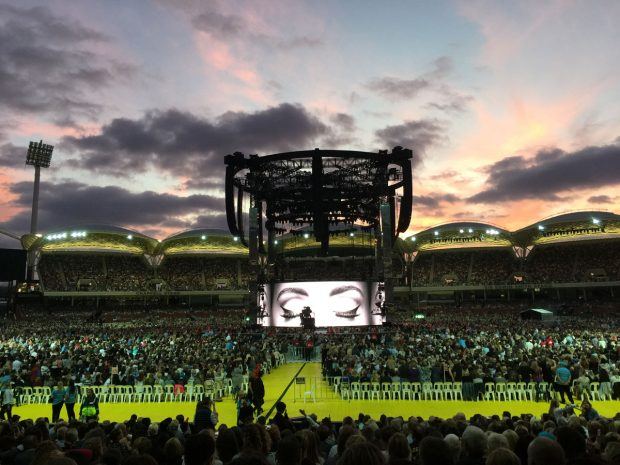 I won’t bore you with details of a concert—a mega-concert at that. There was music, there were stories, moments where Adele asked the crowd to dance, or to cry, or to not mind her “potty mouth.” She ended up giving $20 to a young girl in the audience after promising not to swear too much. She shot four t-shirts out into the audience, once in each quadrant. She called on a woman in the far back, top-level bleachers (“the cheap seats”) where she’d left a handwritten note taped under the seat. Adele was magical; her passion and energy infectious; the crowd was alive with energy. We sang together, danced together; we balanced and bounced giant bubble balls which appeared in the audience. 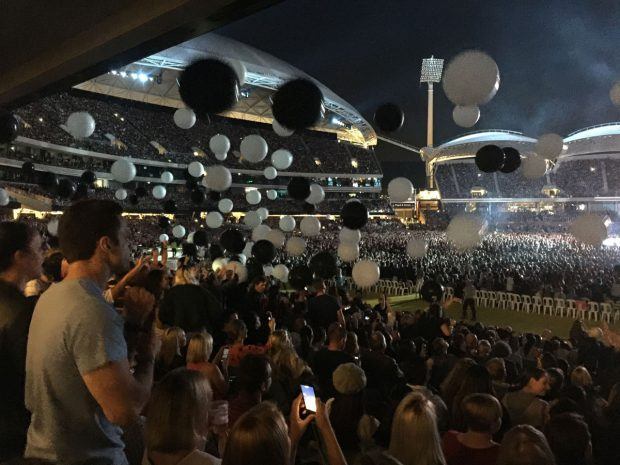 While I was in Adelaide just for a week, the opportunity to see Adele live (in her first Australian tour, too), was as memorable as any other touristic thing I did. I held a koala, explored the wine region, sat at the beach, attended Fringe festival shows and danced more than a few nights until the clubs closed. When I left the concert two hours after it began, just after 10pm, I found I couldn’t resist the urge to buy a t-shirt. Eighty dollars later, I’d slipped on my new black & while baseball “Hello” tee, walking the 20-minutes back to my hotel stuck with a grin. Me and some odd 70,000 other people roaming the streets of Adelaide, tunes all stuck in our ears. A smile stuck on our faces.

Adele, Adelaide—it was all magic. But so very real.

Adelaide is Australia’s “Festival City”—home to some of the country’s best festivals each March when the city comes alive with international artists and performers. Just by lucky chance, Adele’s concert coincided with my own visit to the festivals. For more information about Adelaide’s festivals, visit SouthAustralia.com. 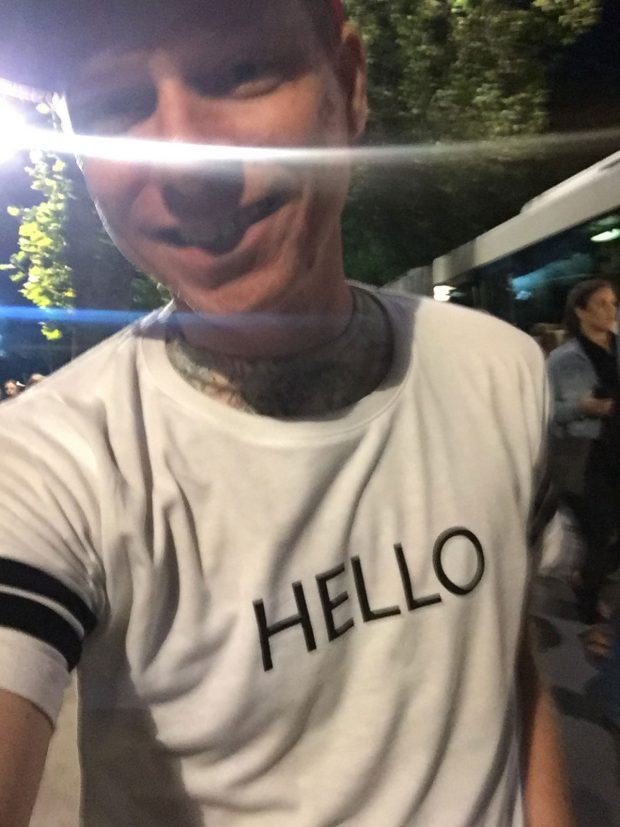 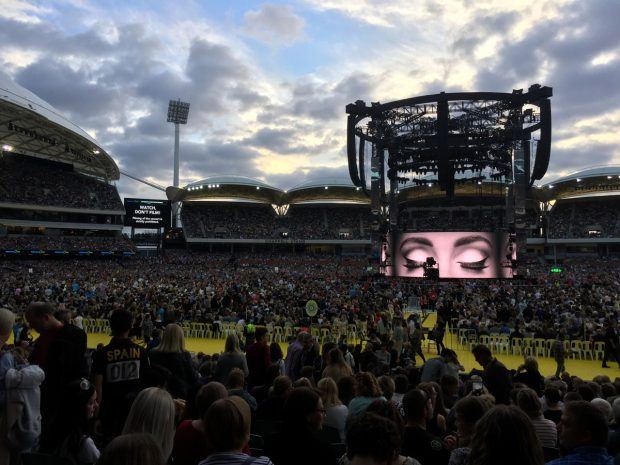 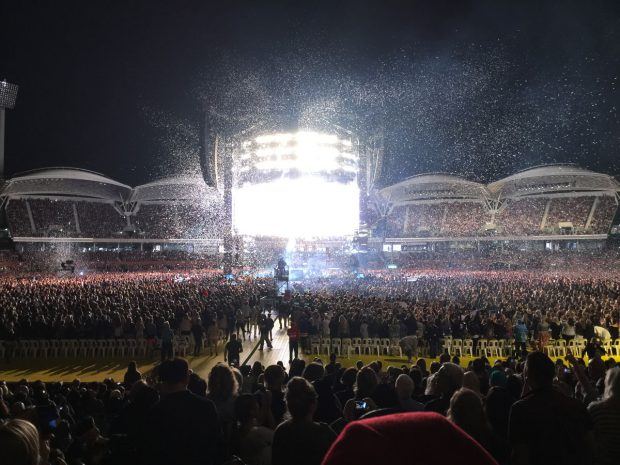 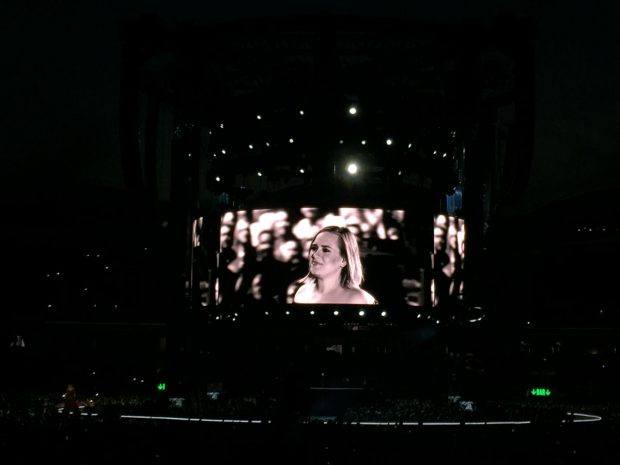