Coming up in a few weeks is one of Berlin’s best annual queer events — the #UNIT 2017 LGBTI Tech & Science conference. I’ve been to previous UNIT conferences and have made friends and business contacts each year, so at this year’s even which is expected to be even bigger and better, I’m looking forward to making friends and meeting new people from around the world.

#UNIT is a unique and entertaining conference: very laid-back, a positive atmosphere without suits or formalities, a lot of networking possibilities, inspiring talks, music, encounters, performances and installations. I’ve attended at least two of their conferences in Berlin in the past, and also have attended many of their Unicorns in Tech networking events which take place regularly. At the #UNIT 2017 conference, you can expect inspiring talks from people from around the world—those queer creators, entrepreneurs and leaders in the technology, science and design fields. 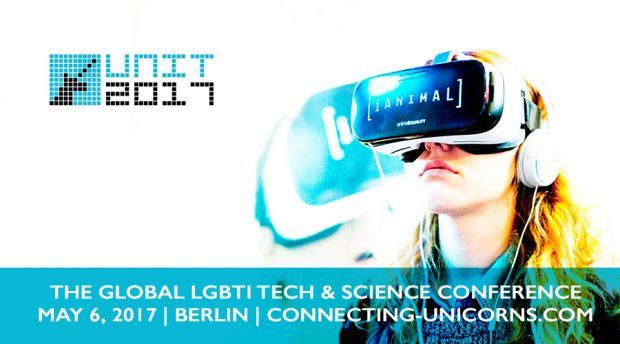 #UNIT 2017 | The Global LGBTI Tech & Science Conference will take place on May 6, 2017 in Berlin. It’s a unique and entertaining conference: very laid-back, positive atmosphere without suits or formalities, a lot of networking possibilities, inspiring talks, music, performances and even art installations. #UNIT is very different from other tech conferences and certainly the most diverse in Berlin—and the most fun!

This year’s conference, which takes place inside SchwuZ (my favorite gay club), is expected to be even bigger and better with all sorts of activities:

Check out the full list of speakers, conference program and get your tickets at http://connecting-unicorns.com/

#UNIT 2017 is organised by UNICORNS IN TECH | Global Tech Community for LGBTI and straight allies. This community of around 1,700+ members (as in October, 2016) is the ideal place for anyone who is interested in technologies, whether they are an industry professional or a casual enthusiast.

In addition to the annual #UNIT conference, the same organizers put on the monthly LGBT tech get-togethers called Unicorns in Tech. These monthly meet-ups have been hosted and supported by various companies such as Google, Microsoft, SoundCloud, SAP, Axel Springer, Zalando, Wooga and others. The goal is to network and to learn about new tech developments and trends.