All the things that make Texas great

It’s my home state, my background, my culture. Like so many people from Texas, the state’s identity flows through me like the free-flowing Dr Pepper that you find in every fast food chain. My Texas blood is as thick as the fancy ketchup from Whataburger.

Most Texans have a lot of pride for their state; it’s part of our culture from the moment we start learning Texas history in 7th grade. Personally, I’ve had a complicated relationship with my home state, but over the past few years—the more time I’ve been away, the more I miss it. And over the past week, as Texas has been in the headlines, I feel even further away from the place that was—and will always be—home.

Here’s why I love Texas. What makes it special and why it’s worthy of your visit. 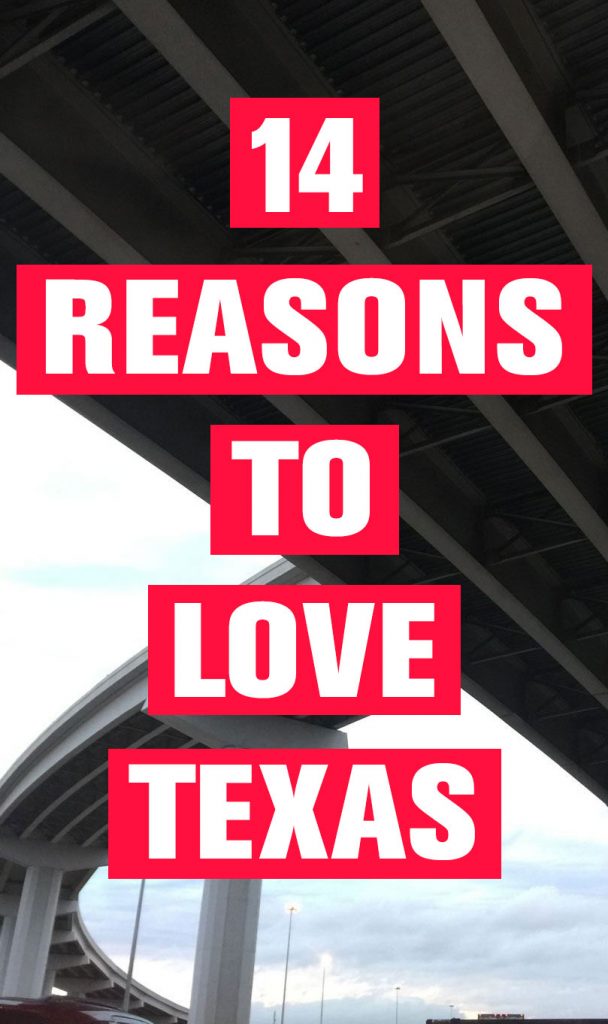 There’s an intense Texas identity. A certain amount of pride is required, but other than that, the typical Texan is so much more than its stereotype. In a state full of natural diversity it makes sense that the people are equally diverse. The state is home to countless international corporations. Houston, with its massive population, has one of the most ethnically and culturally diverse populations in the country, let alone the state.

Back at the end of last year, as other states were enacting anti-LGBT “bathroom bills,” the republican Texas governor suggested the same. Since then, however, Texans (the people, not the government), have come out against proposed anti-LGBT measures in droves. City and destination tourism offices around the state—from the small towns to the big cities, and even attractions such as the Sixth Floor Museum at Dealey Plaza—all publicly signed and sent letters to the state government recommending against anti-LGBT measures. A sign that truly, Texas welcomes all.

And, ultimately, the anti-LGBT legislation that was proposed never passed. A welcome and comforting respite for all Texans.

There’s one Texas stereotype that’s pretty accurate. It’s that southern charm and southern hospitality that Texans seem to epitomize. We smile to strangers, we shake our heads in agreement, we tip our hats when passing people, we hold the doors open, and we make small-talk look easy. It doesn’t matter if we’re having a bad day or not, we’ll still remain polite. It’s all politic anyways. And it’s those passive smiles and meaningless-but-ultimately-charming greetings that make people leave with a smile.

Sure, Texas has fantastic BBQ, great steak restaurants, and a thriving restaurant and foodie culture, but there’s one place more than any other that’s authentically Texas. Whataburger is a fast food chain, but it’s without a doubt the best in the country. Big burgers, open 24 hours, late-night taquitos and, of course, the fancy ketchup®. Love those orange booths and jumbo size drinks. It’s a staple of any Texas road trip, but more importantly—it’s just a part of Texas culture.

The other major Texas cuisine is, like other aspects of Texas culture, a fusion. Tex-mex is its own special cuisine—burritos, enchiladas, fajitas and crunchy tacos. Taco Bell made it famous across the country, but in Texas, it’s the real deal. Melted cheddar on real tortilla chips, queso blanco to start, and salt-rimmed margaritas throughout a meal. Other parts of the country might try to claim they’ve got the real burritos, but Tex-Mex does it better. 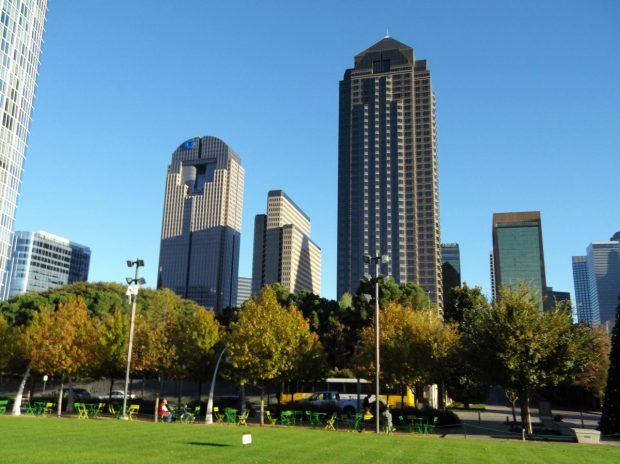 There’s this assumption that everyone in Texas has a horse. False. But sure, horses are never hard to find in Texas. It’s the cities, though, where most Texans live. The Dallas-Fort Worth metroplex is one of the largest populated areas in the country, and Houston is America’s fourth largest city. Austin and San Antonio each attract their own urban dwellers with their own special urban culture.

Texas cities are surprisingly diverse in their cultural offerings—with some of the world’s best cultural institutions, museums and more than enough things to do. There might be fewer cowboys around, but these BIG Texas cities keep the cowboy culture alive with fresh and new perspectives—and greater diversity and openness.

Even with the cities home to most Texans, it’s that flat Texan countryside of ranches and highways that’s most iconic of the state. Texas is BIG—it’s the second largest state in the country—and with all that space, there’s literally space enough for everyone and everything. From the green, rolling hills of Texas Hill Country to the vineyards in Grapevine or from desert mountains in Big Bend National Park to Galveston Island’s beaches and the gulf coast, there’s a huge amount of bio-diversity in Texas.

For the best glimpse of that Texas countryside, simply get in a car and drive. It takes up to 12 hours to drive from Dallas to El Paso and you’ll pass a lot of nothing—but it’s that flat nothingness which makes Texas special.

With a lot of old money, benefactors, and a penchant for quality, Texas has some of the world’s best art museums in its cities. Fort Worth is home to the Kimball—an art museum with a collection that rivals the Metropolitan in NYC or Europe’s classic art museums. Houston has the Menil Collection—another equally impressive collection which includes the Rothko Chapel. It’s a one-of-a-kind experience and a star attraction across the state.

It’s the American south, so it’s no surprise that Texas is hot. But with all that hot air, and the winds that come in from the north and from the gulf, it turns Texas weather into equal part nightmare and adventure. Texas thunderstorms are a sight worth seeing—the electric lightning bolts, the booming thunder, the rain every which way.

Donate to the Harvey hurricane relief fund to help the thousands of people affected in Houston.

Read more: Where to donate – and how to avoid scams 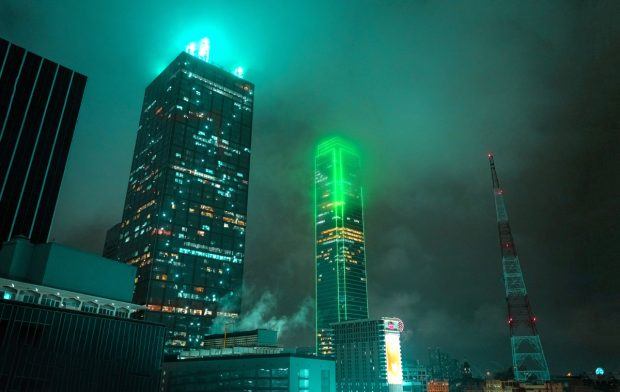 Okay, so Texas is HOT. During summers, the temperature regularly goes over 100ºF (32ºC) for weeks or months at a time. But everywhere in Texas is fully air-conditioned. The state wouldn’t survive without it—and the millions of swimming pools.

Texas has a lot of stereotypes—the cowboys, the conservatism, the guns and cattle and big boobs and blonde hair. But perhaps the most quintessentially Texan stereotype is the love for football—especially high school and college football. It’s simply a part of life in Texas. Even for a decidedly unsporty gay boy growing up in a DFW suburb, I found myself at my high school’s Friday night football games every September and October. And then Whataburger afterward.

There’s a special charm to watching a game, the terrible nachos with perfectly round tortilla chips, the plastic cups and bright stadium lights. The game almost never mattered, it was the simple activity of hanging out at the stadium. 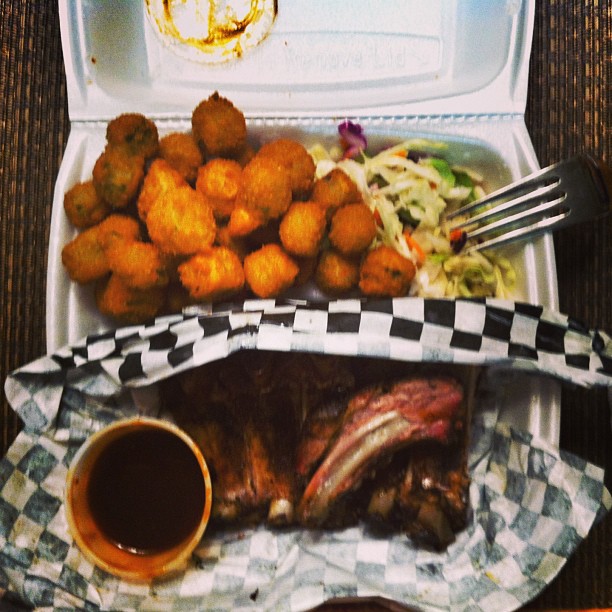 You’ve got to love Big Tex. The Dallas Fairgrounds transform every year to one of the state’s best events—the Texas State Fair. It’s a ridiculously large space where you’ll find farm animals on display, carnival games, and just about every fried food imaginable for sale. It’d be disgusting if it wasn’t so delicious and absurdly fun.

Texas might not be the first place you think of when you think of a shopping trip. But the state is home to a handful of iconic and important shopping malls. In Grapevine, Texas, the Grapevine Mills mall was, when it opened in 1997, the largest shopping center for thousands of miles. Houston, as one of the country’s wealthiest cities (thanks oil!), has The Galleria shopping center with all its ritzy and glitzy international brands.

Besides the massive shopping malls, there’s one thing uniquely American that you’ll find across the state: the strip plazas. Small rows of shops alongside state highways and in every suburb. They’re fairly consistent across the country. There’ll be a Hallmark store or something similar selling bric-a-brac and faux-vintage things, a fast food deli or other similar brand, a Chinese restaurant, a credit union bank, and if you’re lucky, a Starbucks. Across the street will be either a Target or a Walmart, with a Best Buy, Home Depot, Costco or Kohl’s all nearby, too. It’s the soccer mom’s heaven and just a natural part of the Texas ecosystem. Oh, and there’s probably going to be a Stetson’s shop where you can buy your cowboy hats and boots. 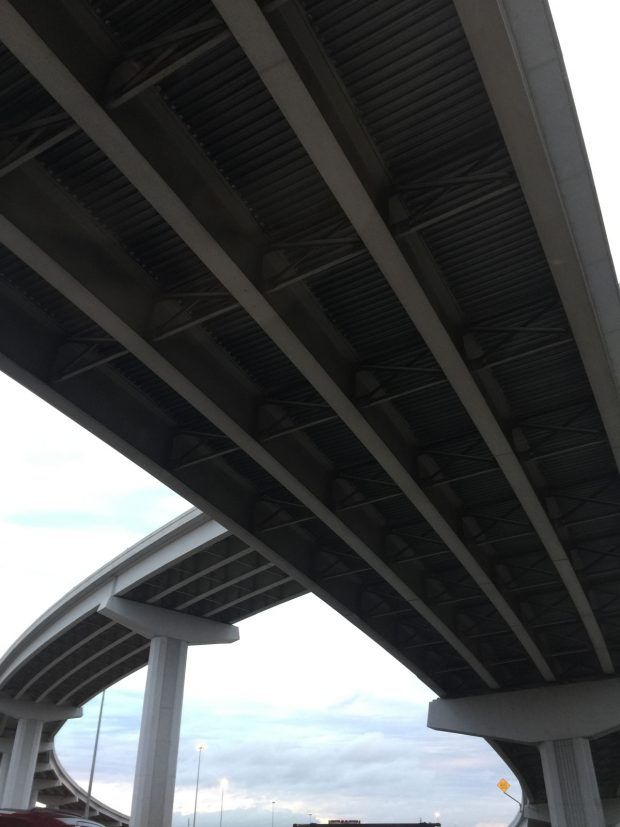 It’s (nearly) impossible to get around Texas without a car. With thousands of miles of highways and so much empty space in the state, road trips are inevitable. In Texas, the highways stretch on, between farms and fields of brown-green-gold wheat. Flat roads and mega-highways of 10 or 12-lanes are the norm in Texas.

And the interchanges are relatively unique to Texas. There’s the famous High Five Interchange outside of Dallas where you end up driving nearly 11 floors up in the air. From afar, they look like alien appendages coming out of the ground, but driving across, through, under or over them feels like a magical form of transport. Texas highways have a lot of funding and infrastructure, even when the construction might seem never-ending, the roads end up smooth and strong, but feel strangely light and airy when you’re driving.

Texas might seem like a foreign land, and in a lot of ways, it is. There’s a special Texas culture in the people, the food, the way of life—even the way we speak—but it’s all these unique Texas features which make it not just one of America’s best destinations, but one of the world’s. Everyone wants to see Texas at some point—whether it’s just for that quintessentially American road trip, or that once-in-a-lifetime opportunity to experience somewhere so distinct.