The Total, Inescapable Joy of a German Beer Festival

Living in Germany there are a few cultural events and traditions that are just too difficult to even try to avoid. And one of the most seemingly important parts of German culture is that frothy amber drink: beer.  And what better place to consumer beer than in that most German festival: the beer festival.

I’ve seen it reported that Germany drinks 107 liters of beer per capita—which is a whole lot of beer if you stop to think about it.  A “kneipe” (essentially a dive bar) is one of the most authentic places to get a good German brew (and cheap!), but then there are the drinking festivals.

In Berlin, we’ve got the annual Biermeile where hundreds of vendors set up for a weekend along Karl-Marx-Allee. But in Bavaria, there’s the Oktoberfest. I’ve actually never been to Oktoberfest, but I have been to the Swabian version in Stuggart (and Germany’s second largest beer festival), the Cannstatter Wasen. 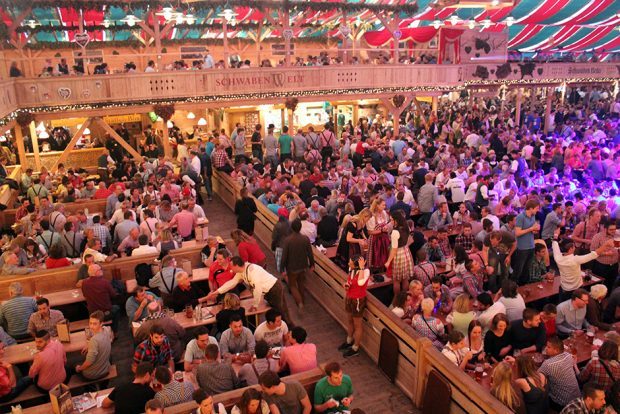 Now listen: I like beer. I like it quite a bit, actually. While living in Boston, I was a big fan of my local brews, Sam Adams and, of course, Harpoon IPAs. Plus there’s that whole craft beer craze.

In Berlin you can buy beer for as little as 0.60€ in spaetis and convenience shops. It’s not my favorite beer, but hey, when you need to drink, a drink’s a drink. Beer seems to just be a vital, integral part of German culture, and the German beer festivals—well hey, that’s just the epitome of the culture.

Related: Words You Have to Know for Oktoberfest

There’s something just so much fun about a huge festival dedicated to drinking oversized jugs of beer in a tent full of people in funny clothes dancing on benches (NOT the tables), singing songs with arms around strangers and consuming sausage and knödel balls like there’s no tomorrow.

Beer festivals aren’t like your other festivals. First, there’s A LOT of alcohol. And maybe that leads to a lack of inhibitions and free-flowing friendliness (read: sex). But there’s also a strange sense of community from sitting and drinking with strangers. It’s that same type of camaraderie that has made them so popular with tourists as well as locals.

Okay, I’m being purposefully glib here. I’ve made this comment before, because honestly these beer festivals just seem so…basic. But honestly: beer festivals are really just festivals—there’s no hetero-normative or homosexual agenda to them. In fact, Munich’s Oktoberfest famously has one day during the event where a tent goes completely gay. In Berlin, the admittedly weak Octoberfest celebrations even include a weekly gay night at the Gaywiesn.

For a gay guy at the Wasen, I didn’t expect to casually find any other gays (which I didn’t) but it didn’t matter: the crowd was super fun, the beer was good (or I was just drunk) and the music was the perfect mix of embarrassing hits and German folk songs.

Things don’t get much more German than at a festival with alcohol. It’s just a part of the culture here—and an important part of it, too. It’s why you’ve got beer gardens around the world celebrating “Oktoberfest” this month. In the autumn, the festivals are always about beer. In the spring, it’s wine. And in the winter: it’s the Glühwein at the Christmas markets. All perfectly good excuses to visit a country: the drink.