Okay, so for those of you who don’t see any value in Twitter, you’re basically an idiot. This past week, on Monday, I saw a tweet on my Berlin Twitter list about winning tickets to see David Guetta live in Berlin. Deciding it was worth the 10 seconds of effort, I went for it. Just had to send an e-mail to Sugarhigh and within maybe 30 minutes, I’d won a ticket +1 to the Beats by Dr Dre event.

Honestly, at that point, I didn’t know what I’d gotten myself into. First of all, it was the very next night. Secondly, every bit of information I could find about the Beats by Dre event, was in German. And, uh, I don’t speak no German. Plus, it’d been advertised as something with David Guetta, but I could find absolutely NOTHING online about David Guetta going to be in Berlin. Whatever. I’d find a friend to go with and just see what it was, whether David Guetta was there or not. At the very least, it was free entrance to a club I hadn’t been to yet: Spindler & Klatt. Not really the type of club I’d usually go to (seemed expensive), but I didn’t have anything to lose except time.

All the information I could find about the Beats by Dre event was so vague, that by the time Tuesday night rolled around, I didn’t expect to find anything special. So with a new Couchsurfing friend, I was off to Spindler & Klatt at about 10:30pm. Not really knowing anything about the club or the event, as soon as I saw what we were walking into, I realized my doubts weren’t going to be realized. 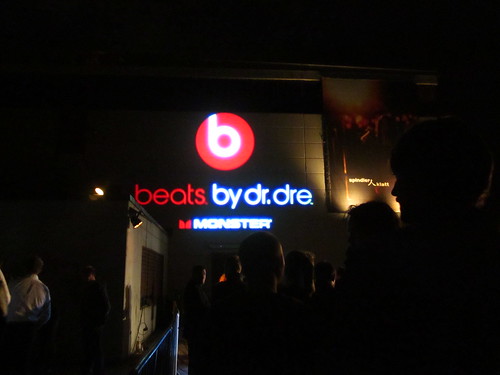 The crowd at the Beats by Dr. Dre event was pretty varied. Of course I showed up in my t-shirt, converse & hoodie (my friend similarly outfitted) but most of the crowd seemed to be in black mini-skirts & suits. After getting my name checked off the guest list, we walked on through into the club….along a RED CARPET. Any doubt I had about the event was gone by this point.

As we were shuffled past the press & photographers along the red carpet (little did they know how famous I was, ha!), we were handed shots of Jägermeister and then glasses of champagne. HELL YEAH. Seeing as how it was only 10:30 or so and David Guetta wasn’t going to be on for another two hours, my friend and I spent the time exploring the club, getting to know each other (we’d met 20 minutes before) and drinking glass after glass of free champagne. And also getting turned away from the 3 different VIP sections I counted, including this one on the attached river barge: 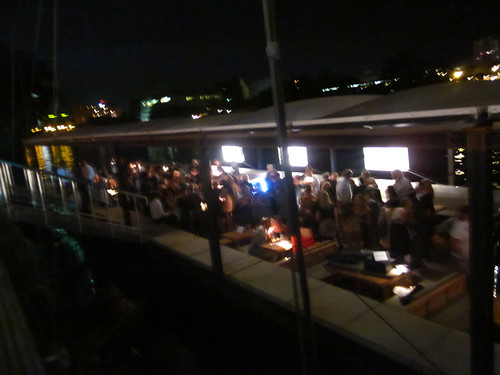 When David Guetta finally did come out to play, we made our ways through the crowd to get up front. Not sure why but most of the crowd was rather…tame. Not so much dancing here which I didn’t really expect. Probably because it was a free, invitation-only event where most of the tickets were given away. I noticed a few people who appeared to be rather important in the “Berlin nightlife/event industry” but who really knows. They were probably just posers. Though I couldn’t keep my eye off a guy who was carrying a C/O newsletter, which I thought was pretty awesome as it’s one of my favorite galleries in town. Also noticed the drag queen who I’ve seen around town a few times.

So, despite a crowd that was here for free, drinking for free and people who seemed to be into the scene, once David Guetta was at the booth, more people were holding up their stupid iPhones (jealous) than dancing. 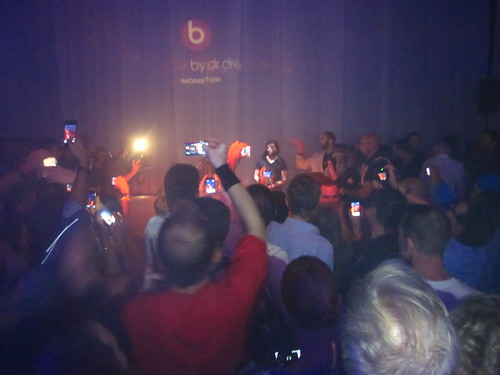 Obviously I was snapping my own pics, but still. I wanted to DANCE. to move. Which of course I did. After a short while, my friend and I weaved our way to the front and climbed up one of the speakers (had to edge out another couple to do so). AMAZING. Ended up staying up there the whole night, which gave me an excellent view of Mr Guetta and the crowd. Also, put me straight in his line of sight. Naturally there was a deep connection when we made eye contact. 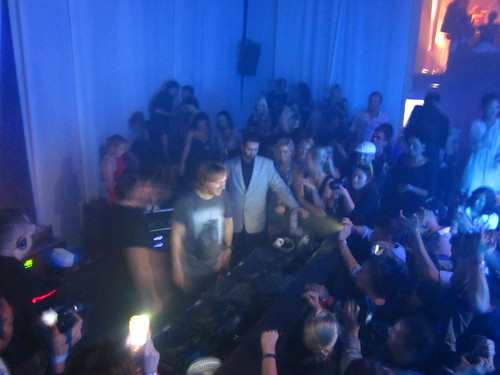 You don’t see it in this shot, but he was wearing the Beats by Dre headphones all night (obviously b/c the event was held by Beats by Dre). I won’t lie that as soon as we’d walked the red carpet to enter and were handed free shots & champagne, I secretly thought there was a chance (a hope, a dream) that I’d be given a pair of headphones, too. Guess there’s only so many free things you can get. And I’ve used up a lot of my luck capital this week, what with this David Guetta concert and a Queer Noises festival the next day.

Here’s a photo of my shoes on the dancefloor: 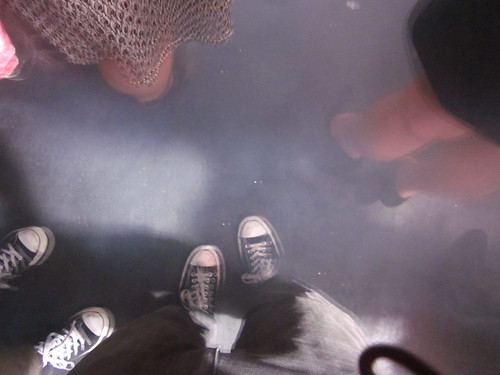 Okay, so David Guetta played until 2:30am or so, and my friend and I went to get free photos taken in a Beats by Dre photo-booth that was inside the club. We picked up our coats from the free coat-check (seriously, a club like this with a free coat-check?! thank you dr dre!) and waited behind this obnoxiously beautiful threesome (2 girls and a Dutch guy) but after 10 minutes, gave up and headed home. One euro pizza on the way and sneaking onto the nightline bus, I was home by 3:30 and in bed shortly after 4a.m. Don’t think I’d sweated through my clothes ever as much as I had that night. In all honesty, I was dancing the ENTIRE set, most of it on this speaker by the stage. Who cares if the other people in the crowd weren’t dancing? I was and I enjoyed it. Thing to take-away: remember to dance more, and to dance more on stage.

Now I need to go buy a set of Beats by Dre headphones.

(oops, forgot to mention, i shot a couple of poor-quality videos. check ’em out on youtube)