L’Hexagone, the most romantic country in Europe, is such a great travel destination. With cool cities, beautiful nature, fascinating history, stunning beaches and great food, France has everything you could wish for from a European destination. Start here with my basic France travel tips, or jump down below to read my latest France travel blogs.

The weather in France varies a lot depending on the latitude and proximity to the sea. The wettest and coldest parts of the country are in the northwest on the Atlantic coast and English Channel, while the driest and sunniest are in the southeast facing the Mediterranean. Summers throughout France get hot and are the busiest time of year, meaning the either late spring or early fall are often better choices to visit most parts of the country.

Aside from Paris, France is home to loads of cool cities. Here are some of the best of the rest that are worth visiting.

Marseille – This Mediterranean city is the second largest in the country, and with its great climate, alternative things to do and great nightlife, it shouldn’t be missed.

Nice – Also on the Mediterranean coast of, Nice is the capital of the iconic French Riviera. For a long time, the city was a luxury escape for French and European aristocrats, but today it’s a surprisingly hip beach destination with a friendly and welcoming attitude not often seen in other areas of France.

Lyon – The student city of Lyon has great museums and parks to explore, a wide range of cultural activities happening year round, some cool street art and an excellent food scene. Don’t miss it!

Going on a tour in France can be a great way to see parts of the country that you might miss otherwise on your own, and it can save you time and money. Take a look at this selection of France tours.

These are a few of the best things you should know about visiting gay France.

Le Marais, Paris – Home to some of Paris’ most famous nightlife, the capital’s gay village is the epicenter for all things gay in France. Spyce is a perennial favorite, especially on weekends when it stays open later than many other venues, but also wander down Rue Sainte-Croix de Bretonnerie after dark when it transforms into a hub for gay nightlife.

Montpellier – After Paris, probably the second biggest gay scene in France is to be found in the southern city of Montpellier. As well as plenty of gay-centric nightlife in town, there are gay nudist beaches just outside of the city that are welcoming and easy to get to.

Lou Queernaval – In addition to the regular Nice Carnaval, this queer event taking place in late February features live bands, dancers, traditional carnival floats and LGBTQI organizations throwing glitter and confetti across the Place Massena. It’s a night full of colors and characters—a friendly (and free!) environment for the queer community of Nice and visiting travelers.

France has plenty of cool and quirky hotels, as well as all the big chains you’d expect. It’s usually worth considering booking in advance, but I’ve found that using Booking.com, Agoda.com or Hotels Combined can be really useful for finding last-minute deals. 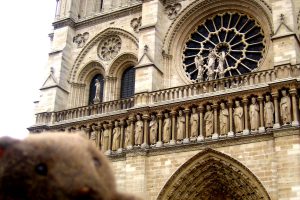 Weekly photo series following Mr. Wombat on his travels around the world. He’s a wombat.