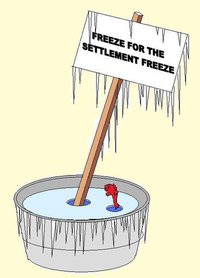 Just discovered that there’s going to be a flash mob in Israel next week. As a hipster, there’s little to no reason for me not to go. As someone interested in peaceful protests, I’m there! And it’s for a good cause.

When I studied abroad in London for a very quick and way-too-short four months, flash mobs were just beginning to pick up. I wasn’t paying close enough attention, nor was there Twitter to help me find things to do, so I missed the few big ones that happened while I was there. I’d always end up reading about them in the free daily the next day. Plus, I didn’t have the courage to go. Alone or otherwise, doing something silly in public wasn’t exactly my style back then.

Now? I love silly. And I love meeting strangers. But most importantly, I care about peace.

Come and show your support for a renewal of the settlement freeze and peace negotiation by participating to a freeze flashmob.

Time until the end of the settlement freeze is running out. We must make sure that the voices of the majority in favor of a prolongation of the freeze and peace negotiations are heard by our government.

WHERE? Kikar Dizengoff around the Agam fountain

WHAT? At 14:30 a strong whistle will be heard and all participants will freeze simultaneously for 3 minutes. Take imaginative poses!

Can’t really decide if I’ll do the freeze or if I’ll just go as a “photographer.” Honestly, I’d rather participate than watch, but then I don’t end up with the photographs. It’s a tricky balance. Here’s a video from the last flash mob I participated in. In Boston on International Pillow Fight day, with my friend Jay.