One of my personal goals for this big tip of mine is to read. A lot, preferably. I know some of you were skeptical that I’d have the time or effort to read, but it’s actually quite easy. I will admit English-language books are increasingly difficult to find, though not impossible.

Plus you can always trade books with other travelers. And luckily for me, the people I’ve met are reading good books.

I’ve got a secret list of books I want to read on this trip (too many to properly list) because I really do have the time. One of the first books on this list is Cervantes’ Don Quixote and I snagged a copy of the book while I was in Seville. It just seemed so appropriate.

“At this point they came in sight of thirty to forty windmills on the plain. As soon as Don Quixote saw them, he said to his squire, “Fortune is arranging matters for us better than we could have shaped our desires ourselves, for look there, friend Sancho Panza, where thirty or more monstrous giants present themselves, all of whom I mean to engage in battle and slay, and with whose spoils we shall begin to make our fortunes; for this is righteous warfare, and it is God’s good service to sweep so evil a breed from off the face of the earth.”

“Those thou seest there,” answered his master, “with the long arms, and some have them nearly two leagues long.”

While I was running around Andalusia on buses from Malaga to Cadiz, Cadiz to Gibraltar, through & back again to Tarifa, I passed by hundreds of windmills. Not the same kind Don Quixote saw, but windmills none the less. 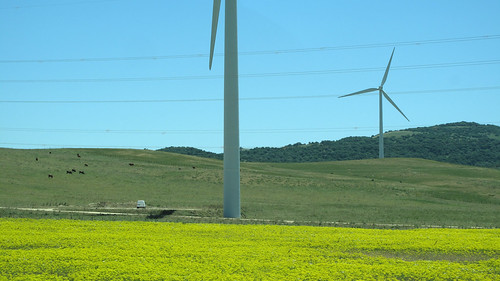 Tarifa, Spain is on the very tip of the southern coast. It’s extremely windy there (kite surfing is hugely popular on the beach) which explains all the wind power they’re harnessing up on the rolling hills. (Not to mention Spain is one of the world’s top producers of wind power.) 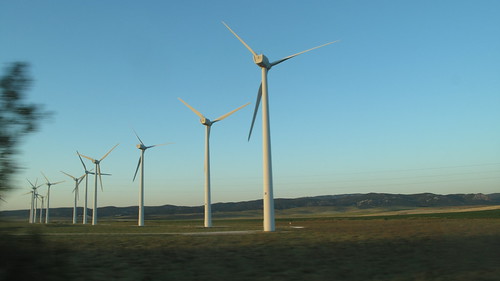 There’s something Romantic (with a capital R) about the Spanish winds though I can’t quite put the words to my mouth. Maybe it’s to do with the changing of rulers (Christian, Moors, Franco) across Iberian history, or the fluid Flamenco skirts the women wear.