New York City, NY— Manhattan is often regarded as the epicenter of America’s multiculturalism. The city is home to hundreds of different cultures which makes the city so lively and special. Historically, New York was the entranceway for many to America (including my own heritage). And today, because of so much cultural heritage from around the world passing through New York City, the city is home still to many cultures.

That’s why when I was invited to go on a NYC food tour with Ahoy New York, I was intrigued. The food tour focuses on two of New York’s best foods: Italian and Asian. The tour took us through Little Italy and Chinatown—two very different cuisines from different sides of the globe, but, in New York, the neighborhoods are right next to one another! 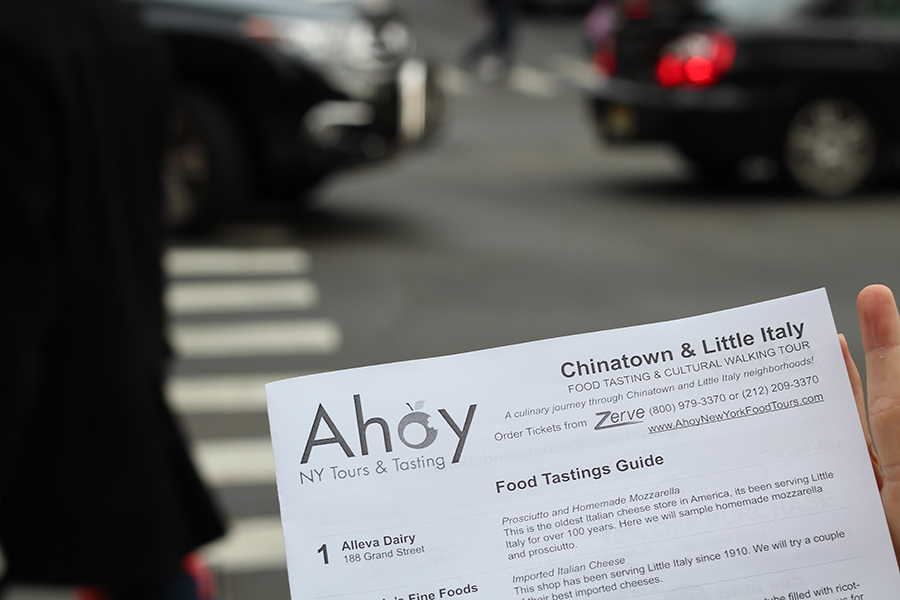 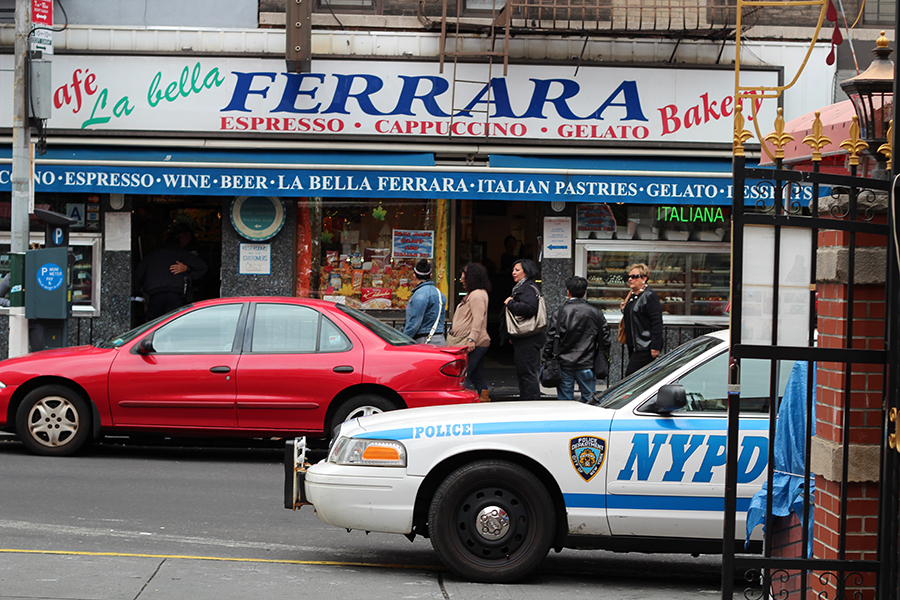 Learning the history of Little Italy

Our food tour started in Little Italy on the famous Mulberry Street. We had a brief history of the neighborhood—how and why the community developed and how it compares today to its past. Our guide was Alana, a NY local who has been giving tours in Manhattan’s tastiest neighborhood for years.

Besides taking us through the heavily trafficked sidewalks, she also provided us with book recommendations so we could learn even more about the local history. Elizabeth Street (available on Amazon) was a recommendation that especially stood out—a novel based on true events of a multi-generational Italian family that emigrated to America, only to find themselves targeted by the precursor to the Mafia: the Black Hand. 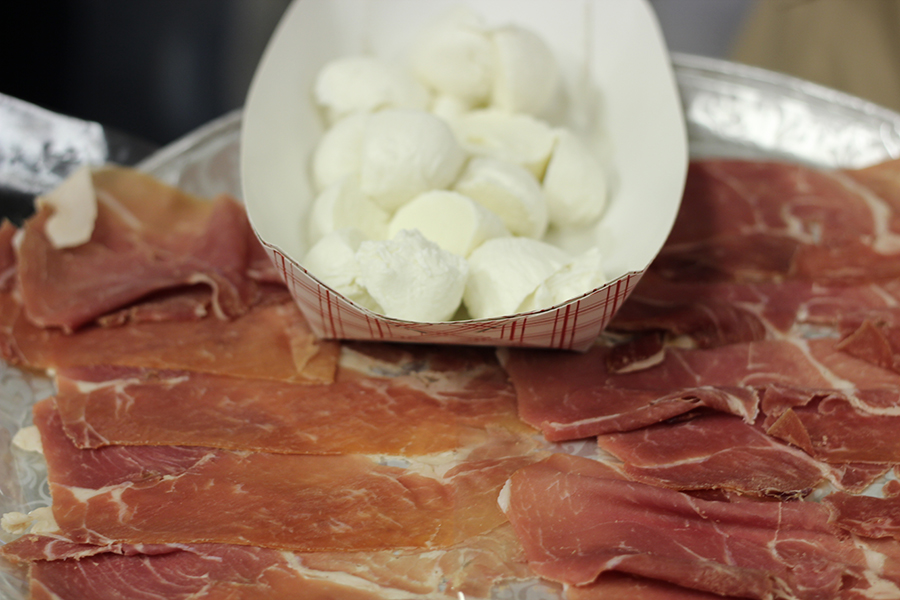 Having recently been on a food tour in Rome, comparing this Italian tour in NYC to the one in Rome was inescapable. While there were many similarities in food selection, the food quality was pretty good in both. Obviously, the food tasted better in Rome—but that’s probably because it lacked the infusion of taxi sounds and subway smells that permeate NYC. 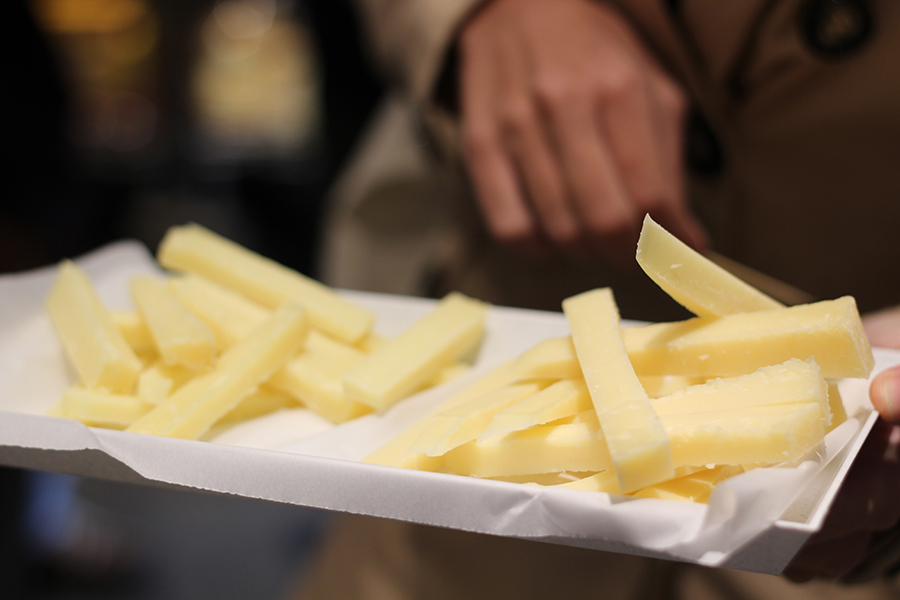 Our tour of Little Italy started at a small, local deli where we tried prosciutto and mozzarella. We then moved down the street to Di Palos where we tried gourmet cheeses (above). The Piave and Moliterno (Pecorino) were the highlights of Little Italy for me. Nothing says luxury like a perfect, quality cheese! 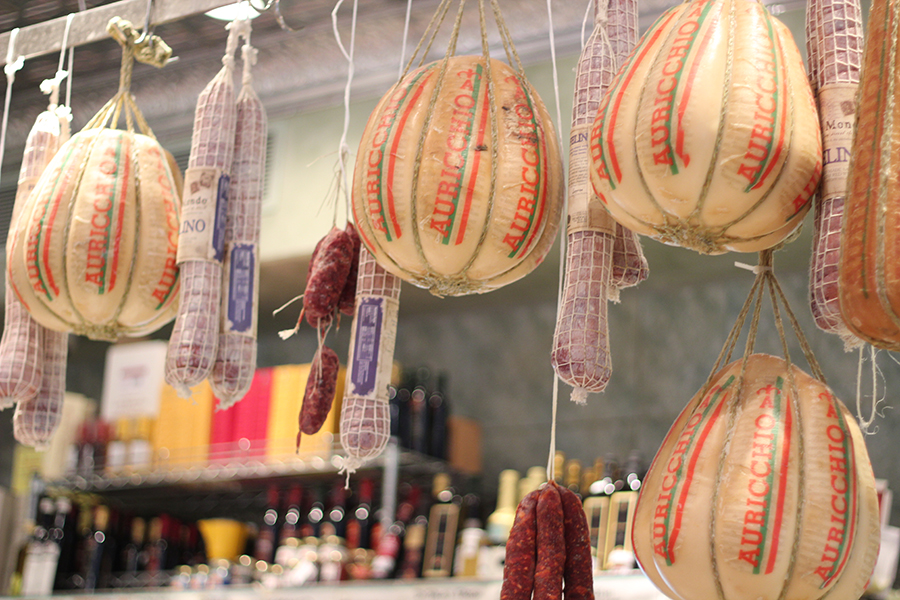 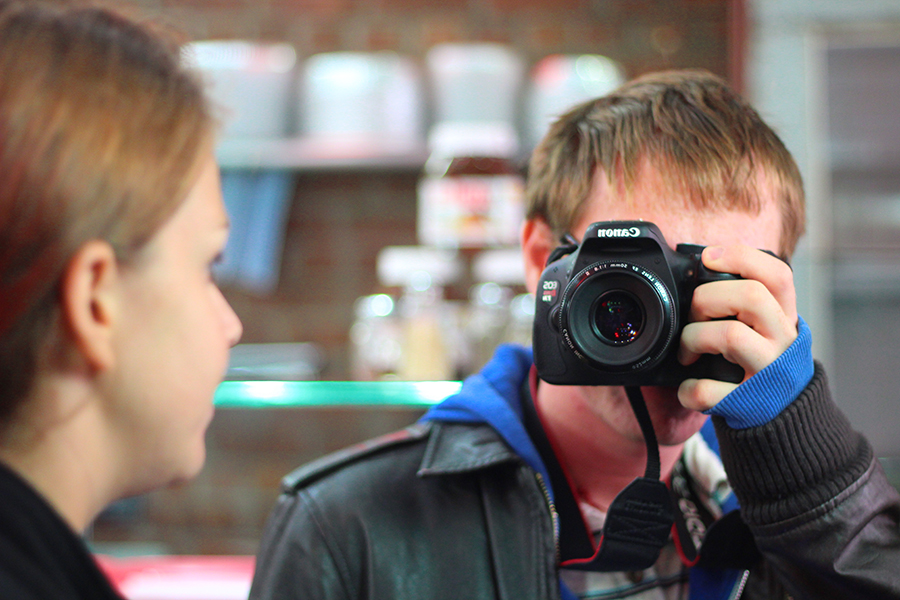 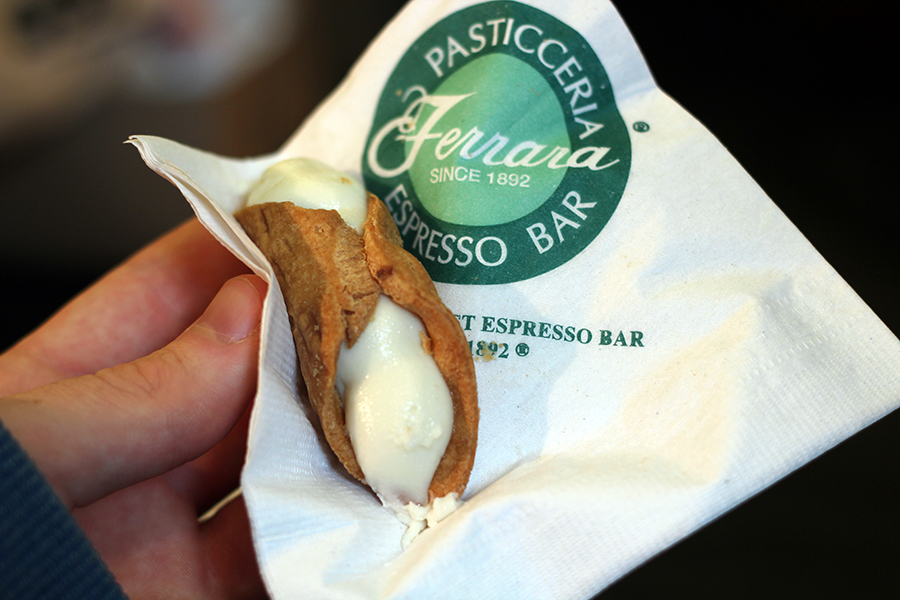 Our NYC food tour started with fresh cheeses as a light snack, moved onto pizza and, of course, culminated in cannolis. Any New Yorker will be able to tell you their favorite cannoli. While I didn’t get the chance to do a proper taste test, the ones at Ferrara’s pasticceria were certainly acceptable! 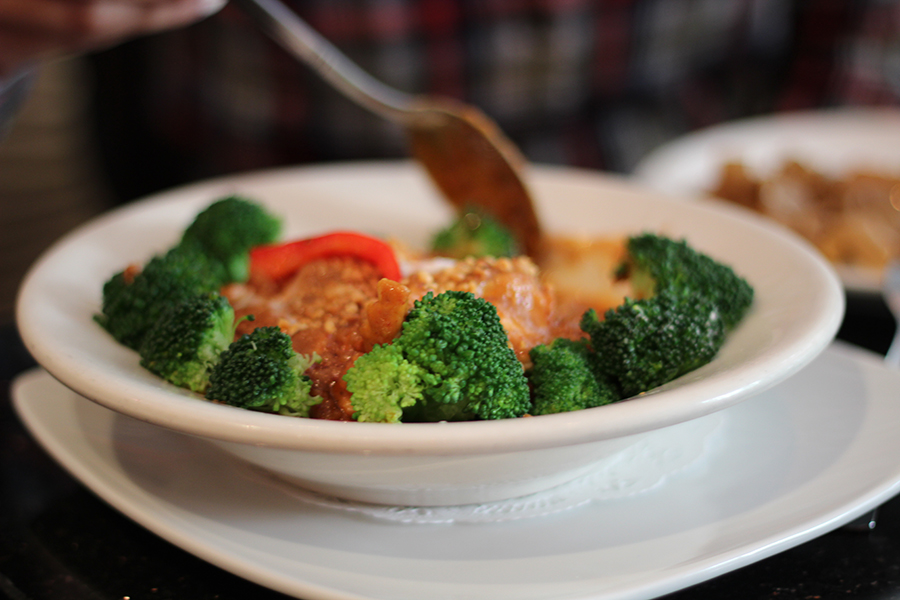 After dessert in Little Italy, the tour switched gears. We walked a few blocks east and made our way into Chinatown. Stopping at some local produce markets, our guide explained some of the tropical fruits available in Chinatown (the notorious durian). You can truly buy just about anything from all over the world in NYC!

Our sit-down lunch was at a typical Thai restaurant. Nothing spectacular. From there, we moved on to have more Chinatown snacks, including one of the most delicious pork dumplings I’ve ever had. 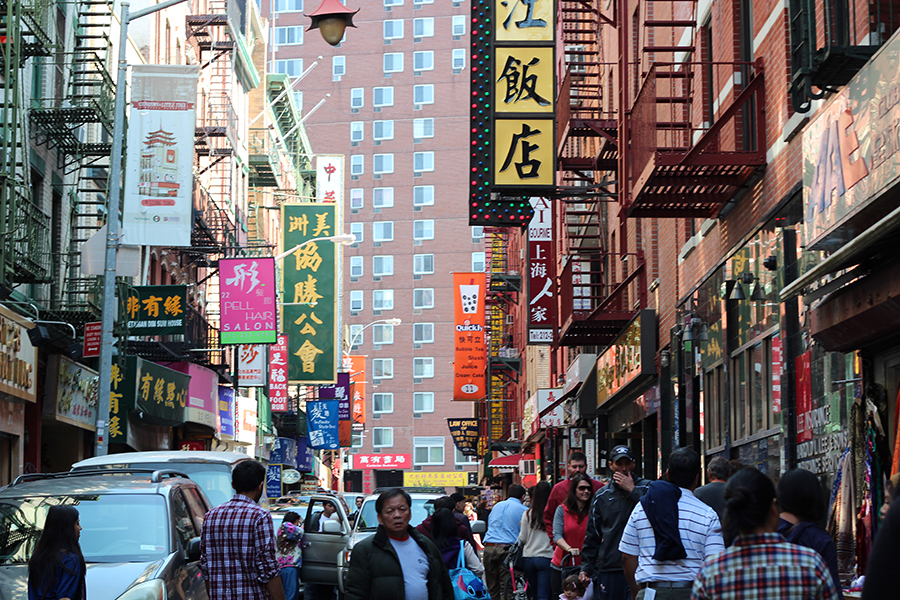 Learning the history of Chinatown

Our tour in Chinatown also included a visit to the Five Points intersection—famous for its location and role in many gang wars. Five Points—an historically crime-infested slum and epicenter of many infectious diseases—eventually overcame its dirty past. Today, the area is home to Columbus Park where on weekends you can catch live shows of Chinese opera, street musicians and children playing. A great place to enjoy some Chinese street food while taking in the culture! 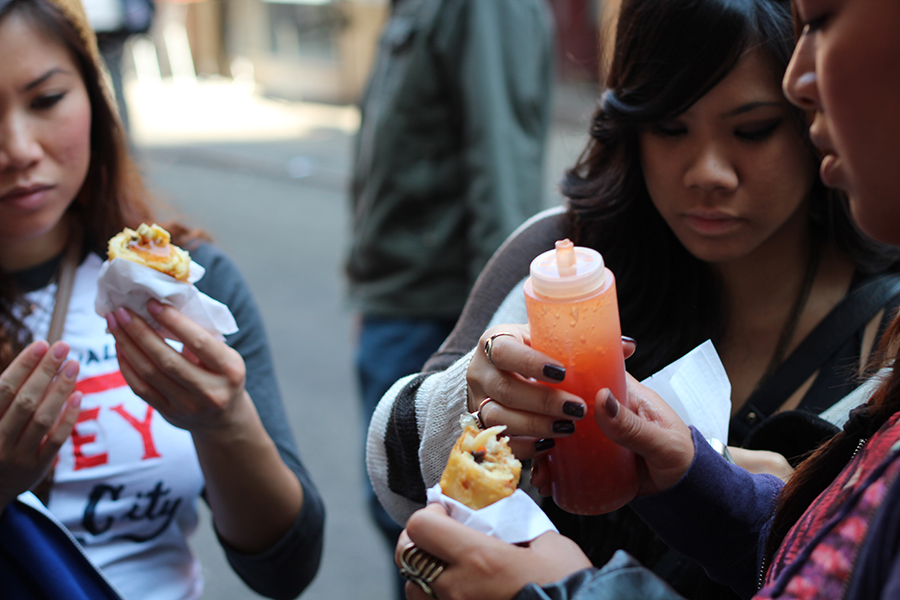 Chinatown can be a bit of a maze—with streets full of signs in foreign languages, it’s easy to get lost. At one point on the food tour, we turned a corner and squeezed into a tiny restaurant. There, we ordered authentic Chinese eggrolls—not the kind you typically get a fast food Chinese restaurants. These were D-E-L-I-C-I-O-U-S! The outer layer of the eggroll was more like a crepe, and with the duck sauce, the eggroll was far and away the highlight of the tour! Many of the other visitors on the tour agreed; we couldn’t get enough! 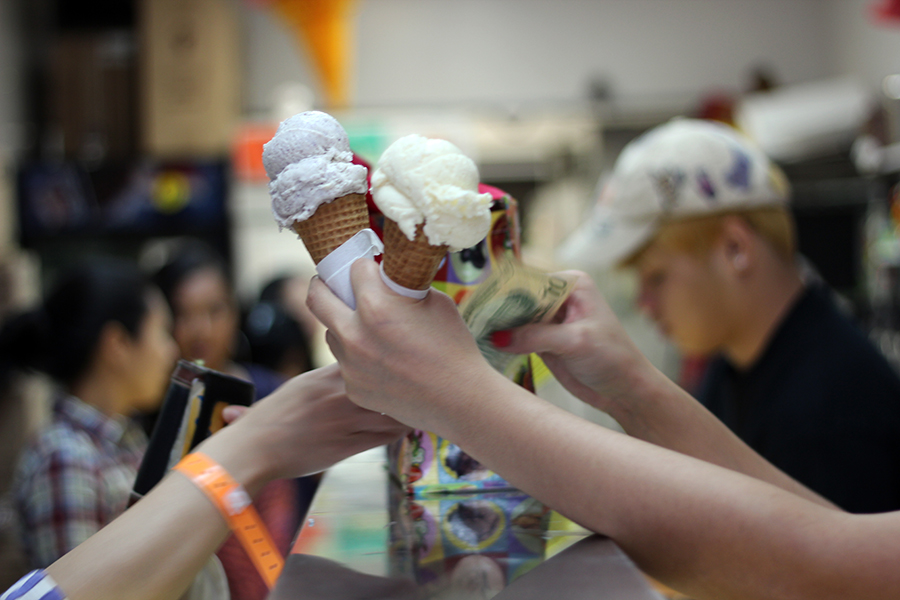 By the end of our tour, the fall weather had significantly improved—which was good for so many reasons, but most importantly because our final stop on the food tour was the Chinatown Ice Cream Factory. Inside the crowded ice cream shop, we tried a variety of different flavors—everything from Black Sesame to Red Bean. The unusual combinations were refreshing and tasty, something not lost on the thousands of New Yorkers who consider this a local secret!

All-in-all, if you’re looking to learn a lot of history about Little Italy and Chinatown, this is definitely the best tour for you. The food is good (but likely not the most amazing food you’ll ever have), but there are plenty of small delights along the way. And what better way to learn about New York’s most diverse and interesting district than by eating your way through its food?