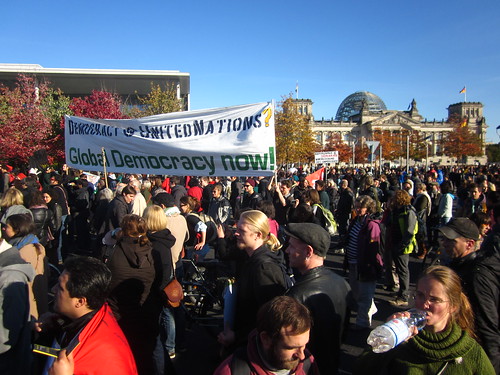 "Global Democracy Now" banner in front of the German Parliament building during the Occupy Berlin protest on 15 October, 2011

If you follow along on Facebook or Twitter, you’ll probably have noticed I’ve been sharing and tweeting a lot about the Occupy Wall Street demonstrations in New York. If you’ve read a few of my posts from the past few months here on this blog, you’ll probably also have noticed a certain amount of anxiousness and eagerness in my tone. Anxious for change in the world; eager to be a part of it.

One of the many advantages of travelling around the world has been to see and experience new cultures. To talk with people I wouldn’t normally talk with. To do things out of my comfort zone. It’s one of the reasons I believe that this “trip” (if I can still call it that) has truly been the trip of a lifetime. So much of what makes me who I am has been affected by what I’ve seen and what I’ve done. But now, away from home for so long, I want to do rather than see. I spent the last 18 months or so abroad seeing and experience new things. Now it’s time to do something with all that I’ve learned.

All that has been going through my mind and when the Occupy Wall Street movement started last month, I was instantly attracted to it like a moth to a flame. I’ve always thought of myself as a rather curious person and when I started to hear reports from New York, my curiosity peaked. I think a lot of people have expressed confusion or a lack of understanding of what exactly is happening in New York (and now around the world). It’s understandable with anything new, anything organic. I don’t claim to know too much about the movement or its alleged goals, but what I do know is that these people are getting the world to talk about a lot of difficult subjects—many of which I think we need to be talking about. And should have been talking about sooner.

Reading reports from New York City, I’ve been incredibly inspired. But so far away from home, I’ve felt restless and, in some respects, useless. So when word of an international day of solidarity united for global change came around, I was more than eager to witness democracy in action. The Occupy Berlin demonstration started as a march from downtown Berlin and ultimately ended up in front of Germany’s Parliament building, the Bundestag. Many were planning to set up tents and “occupy Berlin” by camping in the capital.

While I was around during the 15 October demonstrations in the afternoon and again for a short while in the evening, I wasn’t there when police evicted the protesters and forcibly removed them from the demonstration site. I wasn’t around when the police used pepper spray, nor when a police helicopter circled the crowd from above. I was there, however, to see up to 10,000 people (by some counts) actively participate in their democracy. It wasn’t just hipsters, but old people and babies, children and yuppies. Even teenagers. 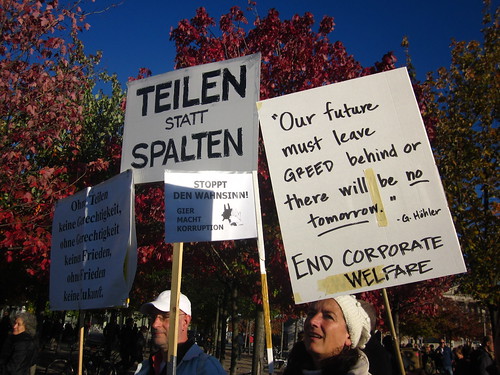 "Our future must leave greed behind or there will be no tomorrow. End corporate welfare." & other signs during the Occupy Berlin demonstration 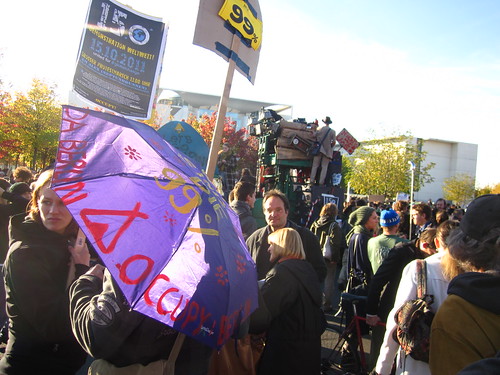 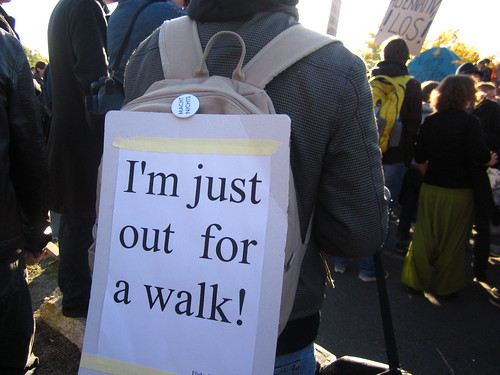 I liked this guy's backpack: "I'm just out for a walk!" 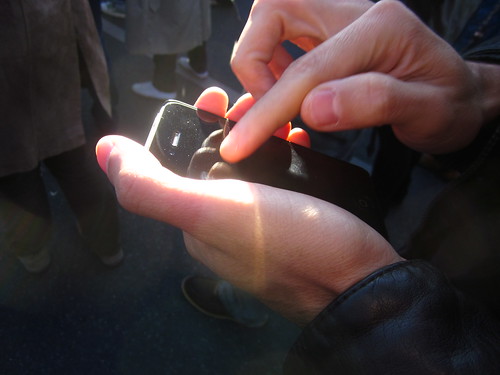 Plenty of people were using Twitter to send out live notifications of what was happening at the protest. When I wasn't there in the evening when things started to get a bit more extreme, following along on Twitter and LiveStream I was able to find out exactly what was happening. 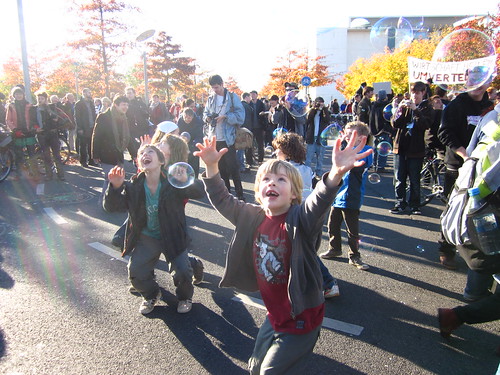 The protest began in Alexanderplatz at 13:00 but was in the park in front of the Bundestag around 16:00. The atmosphere early on was fun and festive and everyone's spirits seemed pretty high. 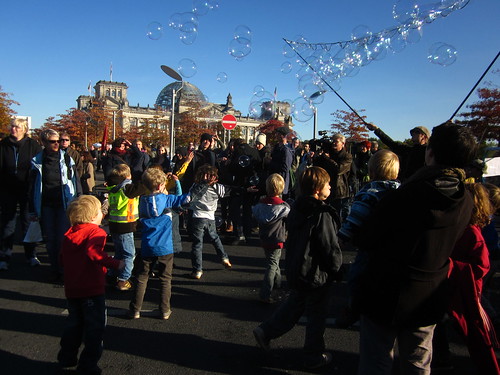 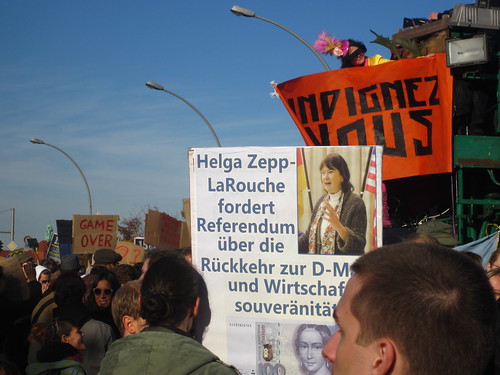 Protest signs in front of the main speakers during the afternoon. There was a vehicle plastered with signs and people climbed up to share their stories or thoughts on the movement. Several times, people would repeat what was being said or break into silent applause in support. 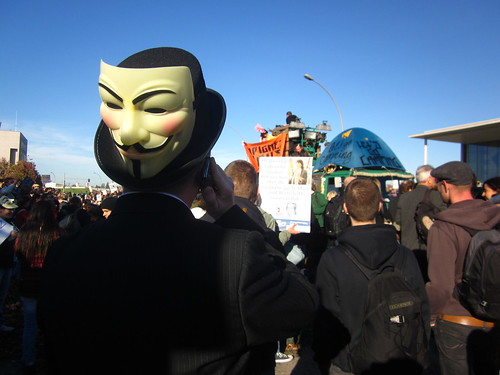 I saw several Guy Fawkes masks during the protest. In London, I read that several people were arrested for wearing masks or concealing their faces during the Occupy London protest. 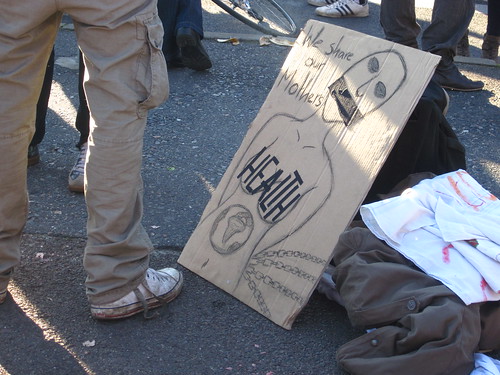 Another sign at Occupy Berlin. The crowd was diverse enough to support a variety of causes, but I feel the Occupy Wall Street movement is still cohesive enough at the moment to allow for this diversity. 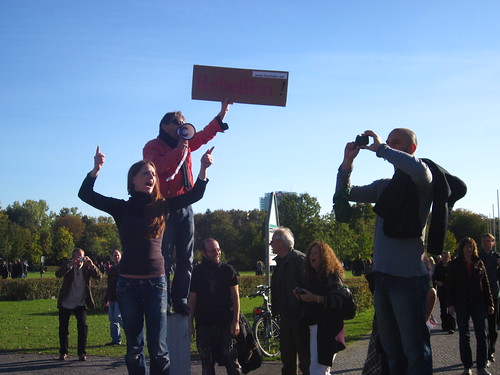 As the Occupy Berlin march made its way from Alexanderplatz to the Bundestag, the atmosphere was cheerful. This group of people were chanting in Spanish. 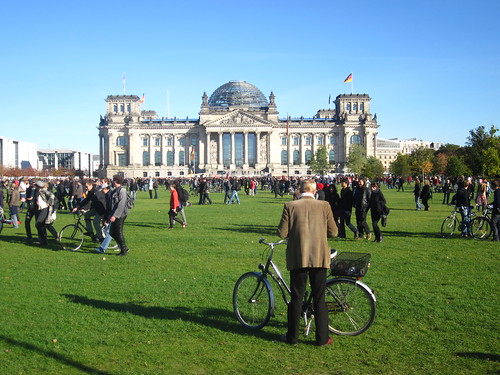 The Bundestag - earlier in the afternoon 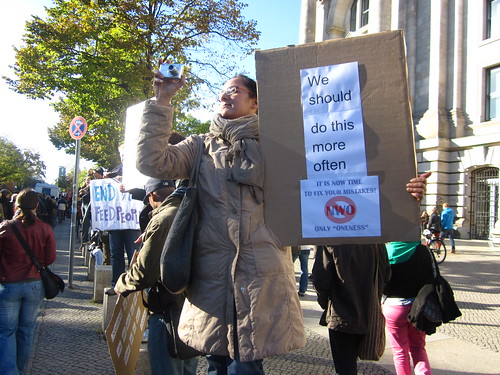 I loved this sentiment: "We should do this more often" 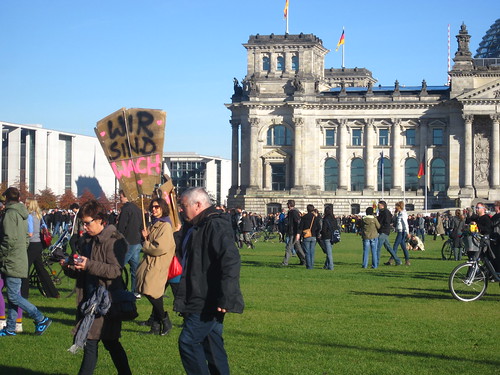 People making their way to the end of the march. Before the demonstration ended up on the steps of the Bundestag. 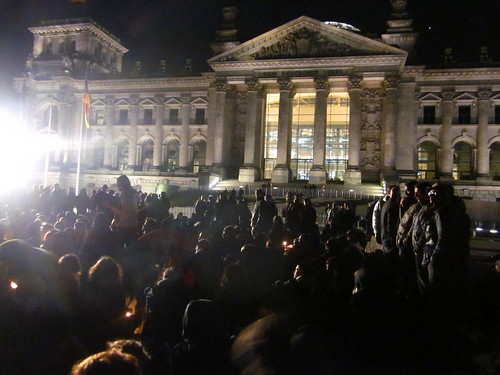 In the evening, I read reports on Twitter and watched on LiveStream as "The Human Microphone" was happening, and eventually, when the police began removing protesters from the ground. After hearing those reports, I went back to the site and found the people remaining in a circle of maybe 200 participating in the human microphone. A few hours later, the police would begin evicting everyone as rumors of arrests spread online.

One last note: as a foreigner watching a political demonstration in a foreign country, I wasn’t willing to actively participate. Though I passionately believe in the Occupy Wall Street movement, I feel it would be neither safe nor right to protest here in Berlin. Which makes this all the more difficult for me and my desire to do something.

Have you participated in an Occupy Wall Street demonstration? What are your thoughts on the protesters?

Interested in additional articles about the Occupy Berlin demonstration on 15 October? Check out these articles: