Every Thursday there is an interactive discussion among the travel community—Travelers’ Night In (read more & a round-up here). This week’s discussion on “paying it forward” got me thinking. And seeing as how you’re an audience, I thought I’d just share my random thoughts. Like or dislike, this is my blog. 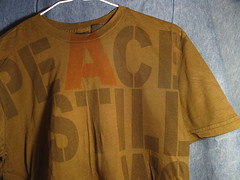 I was never actively involved with community service or volunteering. Most of my support came in the way of just handing over money. Or reading the news and editorials on a subject (though hardly discussing it because I’m terrible at debating). Or wearing hipster t-shirts.

I’ve always been more of a thinker than a doer. And I don’t see much wrong with that. Even now that I’m physically getting involved. And, for the time being, I think I like it.

As you may be aware, I’m in Israel. Once I got here, I knew I wanted to stick around. This place is confusing as all and I wanted to see if I could understand it. Still working on that, but in the meantime, I decided to get involved. I’d never worked for a nonprofit, nor for any sort of cause. Even those that I’d most strongly believed in.

I was a sideline supporter. But now, here in Israel, I’ve taken an internship with the Geneva Initiative—an organization that has actually produced what was once thought to be a very realistic two-state solution to the Israeli-Palestinian conflict. Last year, in 2009, they released a massive book with detailed maps, plans & thoroughly researched resolutions to many of the issues thought to be impossible to solve. I like the idea and it’s something I’m willing to support. With my time and my skills.

Being a first-time volunteer for a non-profit, I don’t entirely know what to expect. The cause I’ve gotten involved with is obviously an emotional topic for a lot of people. And it’s not something likely to be solved anytime soon. My opinion on the issue has changed drastically since I arrived in Israel—and likely will continue to evolve. But that’s why I’m here—to see things for myself so I can make up my own damn mind.

But being a first-time volunteer is hard regardless of how challenging or emotional the cause. I’m already finding myself too emotionally involved and too frustrated at times. All part of a day’s work, I suppose, but it’s hard.

I’m not sure how I’ll fare by the end of this. But for now I’m so glad I’ve gotten involved. I’ve already learned so much and my eyes are now just a little bit more open.

__
If you’re interested in volunteering and don’t know how to go about it, I highly recommend checking out Kirsty’s ebook The Underground Guide to International Volunteering. I got a free copy from her (disclosure!) and it actually helped me immensely in finding the right kind of first-time volunteer job.