Home » Films » Out of the Loop when Abroad: Missing Movies

So by now you probably know that I’m fairly well connected to the online world. Twitter and Facebook are useful tools and they’ve helped me out a lot while traveling. But at the same time, there’s a bit of taunting going on.

Every now and then something shows up repeatedly in Twitter and I don’t particularly know what it is or why I need to know about it. If it sticks around long enough, I may figure it out. Or look it up.

Like this Inception movie that everyone is talking about. I had no idea of its existence until I saw a handful of tweets about it. A little unclear on what it was or why I should know about it, I put the question to Facebook. And got a handful of responses. 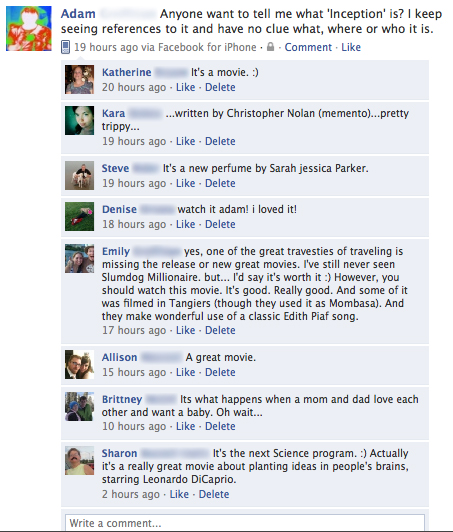 Yes, I could have looked it up myself. Yes, I may have eventually read about it in the news. But this way was more fun. As much news as I may read or current events that I pay attention to, there are some things which I just can’t possibly come across. Movies are probably one of those. Except you can bet just about anything that on the 17th, 18th or 19th of November this year, I’ll be in one of those countries waiting in line at a movie theater.