Being a 20-something living in a big 20-something city, I’ve latched onto a few (relatively) recent “hipster” trends. Sorry, but it’s true.

This one? Polaroid photography.

Polaroid discontinued printing their film at the beginning of 2009. Luckily, I already had a few packages, but I snatched up a few more in the middle of last year. I’ve got two Polaroid cameras, but only one that accepts the film I’ve got.

Over the past two years, I’ve taken several handfuls of Polaroids. You may remember seeing some of them on my Twitter background. Every now and then, I’ll try and give you story behind the photo. This week: the Texas State Capitol in Austin. 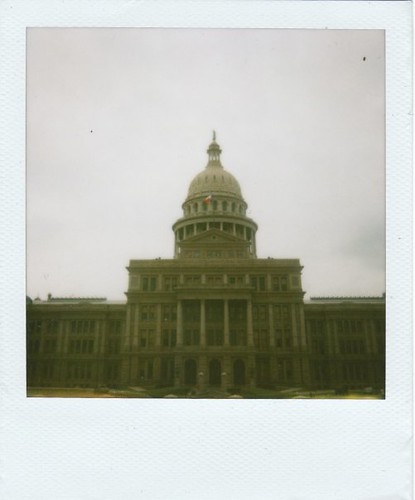 Okay, so first, a moderately known fact: I’m actually from Texas. Sure, I live in Boston now, but I basically grew up in Texas for all of my formative years. Being a Texan expat, I like to go back and see my friends every now and then. In March 2009, my friend Liz and I went down to Austin to visit our good buddy Valeah.

We had a lot of fun with the Polaroid camera, but I also wanted a couple shots of recognizable attractions in the city. This one is the Texas State Capitol building.

The State Capitol hasn’t been without controversy. In 2005, there was a Supreme Court ruling concerning a monument of the Ten Commandments on the Capitol grounds. In my opinion, Texas politics is always in the news. Especially this week with the recent Texas Board of Education’s changes to curriculum.

That’s the extent of my Texas trivia for this week! If you’re interested in Polaroid news, check out SavePolaroid.com.

——
If you liked this post or want to find out more about my Polaroid photos, please subscribe to my feed.