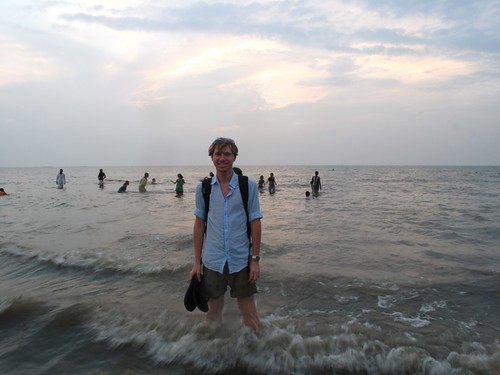 That's me at Jehu Beach, south of Mumbai. Yet another body of water I've put my feet into!

So I just realized I’ve been out of the country for over six months now. I figured I should take a look at the original “tentative itinerary” I set up before I left and see how I’m doing. Here’s the results:

And that brings us to today. My original plan had me arriving in India in late September, early October I think (though I honestly don’t know how I expected to squeeze in all those countries). I was only going to spend a brief amount of time in northern India and then head straight for Nepal, but because it turned out I had a friend who was going to be in India (hi Vivek!) by the time I got to this part of the world, I opted to instead show up here.

According to my original plan, I was going to head to Southeast Asia and then Australia (to hopefully find a decent paying job). A few months back I learned about some other travelers who are planning to be in Bangkok for Christmas, so that became a sort of goal en route to Sydney for New Year’s Eve. Now that I’m in India, I’m not sure it’s entirely possibly to leave this country before, uh, 2015? This place is big! (Don’t worry Mom & Dad, I’ve only got a 6-month visa so I can’t stay forever…)

So, after today, I really don’t know where I’m going to go, nor do I know how long I’ll be here. I’ll reevaluate after I’ve done some solo traveling in India to see how I find this place. And then, depending upon the time of year (and a few other external factors), I’ll find somewhere to go. Suggestions welcome.