I’ve been in Israel for two full months already. I’d always kind of expected to want to slow my trip down once I started my travel in the Middle East, but wasn’t sure of it until I crossed the border into Eliat. Summer in Israel, summer in Tel Aviv was something that had been on my mind for a while. Living in Tel Aviv was something that wasn’t on my mind, however. That was, until I arrived.

Eliat is a bit of a shock coming from the Sinai. Where the Sinai beaches are laid-back, quiet & meditative, the Eilat beach scene is much more like Miami during Spring Break (or so I imagine). It felt strangely familiar (being “Western” and all) but different; welcoming but detached. I loved it.

I spent a full four hours in Eilat before moving on into the heart of Israel—Jerusalem. Like I’ve mentioned before, Jerusalem really is unlike anywhere else. The history, the culture, the sights. Everything about it is different. There’s an intensity in the air and you can feel people’s passion, people’s spirituality. The intensity is inside the walls, inside the people. It’s both exciting and terrifying, but all very comfortable. It almost feels like a city for everyone. 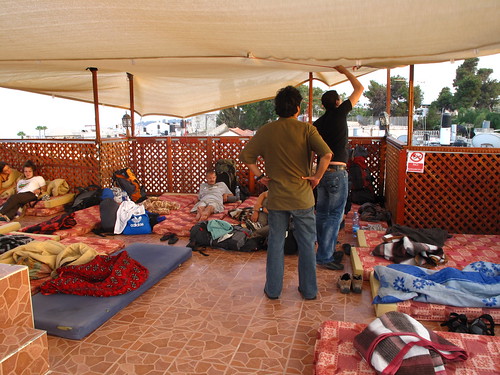 Sleeping on the roof of the Citadel Youth Hostel. For a full week this was my bedroom.

All this was in my thoughts in my first 8 days ‘traveling’ in Israel during summer. This was in July, the summer heat beating down while I slept on hostel roofs and wandered ancient streets. When I arrived in Tel Aviv on a sherut bus from Jerusalem, the city seemed cool and detached from the rest of Israel. It had been difficult to leave Jerusalem so I made a decision I’d go back. I wanted to see some friends in Tel Aviv, but I knew I needed more time in Jerusalem.

Deciding to spend a summer in Tel Aviv

My first week living in Tel Aviv I spent the scorching hot afternoons on the beach; the early evenings on the computer. I was looking for a job—an acceptable excuse to stay longer. I e-mailed anyone and everyone. I had nothing to lose. I went so far as to e-mail the Taglit Birthright group in America asking if I could hop on one of their popular (and free!) “Birthright” programs for North American Jews (“Sorry, but you have to apply from America”).

I looked at several options and after a few days, I found an internship at a nonprofit. A short e-mail exchange, an interview, and both I and the company were hooked on each other. It wasn’t the cheapest nor the easiest of my available options, but it was potentially the most exciting & interesting option. Summer in Israel? Yes, please.

Two months is not a lot of time. I’ve got one more month to go before I start backpacking again. India is my next destination (though I don’t have a ticket yet). I’ve learned so much about Israel in my short time here, more than I would have in my just a few weeks, but obviously less than a lifetime. It’s maybe not enough, but at least I feel more comfortable seeing and knowing these places that you hear about so often. Israel is in the news and at least now I can claim some sort of connection to the place, however weak.

I’m already beginning to figure I’ll need to do this again elsewhere in the world. A few months living in a single place. A place where you can experience a culture, meet different people, get to know a place. And learn more about myself.

__
2011 update: in fact, I did end up doing this again somewhere else in the world: living in Berlin! I also ended up spending a full four months living in Tel Aviv. Read about my final thoughts on my summer in Tel Aviv here: Living in Tel Aviv