This past week was Social Media Week in Berlin. I first heard of it a few weeks before, seeing a few mentions to it on Twitter. After it popping up in more and more places, and starting to notice the millions of posters all over the city advertising it, Social Media Week eventually caught my attention. I met several people at the Travel Massive event who were planning to attend, and working for a start-up here in Berlin, several of my co-workers were also talking about it. Once you’re in a circle, you’re in a circle.

So, once enough of the people running around in my circles were going to attend the event, I decided to visit as well. All this besides the fact that I actually am very interested in social media, its use and its future in marketing.

What is Social Media Week?

Social Media Week is a global event that connects people, content, and conversation around emerging trends in social media. The Berlin event had over 50 different panels from international and local companies. Being slightly overwhelmed with content, I only chose to go to a few, and most of those were last-minute decisions anyways. The events were all free and each evening there was a bar which allowed for networking and meeting many of the panelists—not to mention a free open bar on three of the five nights (thanks to various sponsors)!

On Tuesday, I went to the main event and met several of my blogger friends there, as well as some people I’d met at Travel Massive the week before. Side note: social events in Berlin seem to be happening every day or every week! Whether Travel Massive, Social Media Week or Hello Etsy (read this great review & round-up on überlin.eu), Berlin is NEVER lacking in things to do! 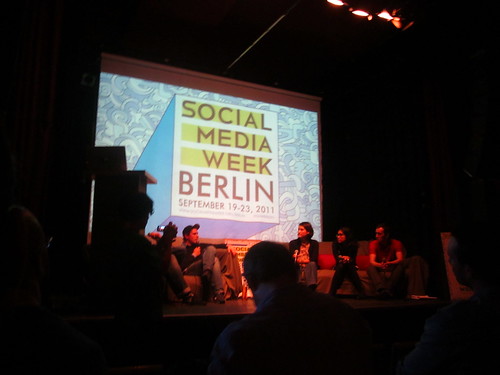 So, at the main event on Tuesday, the first seminar was in German but the second and third were in English. The seminar I was most interested in was titled “Job Title: Community Manager” which turned out to be amazing. It was a panel of four different Community Managers (or Community Evangelists). There were two standout discussions from it, notably the Community Evangelist for SoundCloud, @David. I discovered SoundCloud a few months ago and though I haven’t used it much myself, I love the concept. I even met a few people here in Berlin who were interns there and were actually quite interesting people. If there is one thing I love, it’s interesting people.

Anyways, the Community Manager job title is something I’m interested in a lot…increasingly so. And to see so many people care so passionately about the job’s role in marketing, in customer relations, in community building—it was just too much! I haven’t been that inspired in a long time. Even just to see people passionate about marketing, or music, or a brand—passion is something I can get behind.

What did I come away with?

I only went to a select few Social Media Week Berlin events, but I generally enjoyed it. It was a chance to meet interesting people, to have conversations about topics that interest me and, as always, to do some networking. Berlin isn’t short of interesting people doing interesting things—one of the many reasons I’ve fallen in love with this city. There are so many people here doing incredible things, trying to create or do. To see people so passionately involved in creating a future is an incredible feeling. Even if I’m just watching from the outside.

So, for me, Social Media Week was just another Berlin event to inspire me. Which it did. Thanks to several of the people I met, the conversations I had and the panels I attended. Social media is a topic that interests me (you’ve probably noticed that if you follow me on Twitter) and I love to see interesting things happening with it. (Check out this new trend in London: bookswaps through social media!)

I also came away with a new Nokia E7 smartphone, but that’s another story.