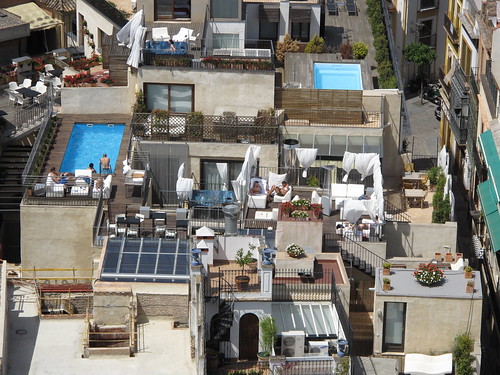 I’m going to try something new with this post. Just my random ramblings with some photos and video from my short time (4 days) in Sevilla, Spain. While it was memorable, exciting & interesting (to say the least!), it hasn’t been my favorite place in Spain. Though I almost expected it to be.

Oh, and a quick aside: I wasn’t planning on writing about Sevilla this way but I feel I’ve been slacking with the blog a bit—simply putting up photos, though nice, is actually pretty easy. Photos require more access to reliable bandwidth (weefee is still my favorite pronunciation ever, by the way) but don’t require too much thought. Plus, I haven’t written anything in a while.

I’d heard great things about Sevilla before arriving here. I think it’s often the third most popular destination to visit in Spain behind Madrid & Barcelona (or Barcelona & Madrid depending upon your preference).

And that fact became immediately apparent just walking down the streets of Sevilla. I overheard more English here than anywhere else in Spain. It was almost shocking—until I realized how popular of a tourist destination Sevilla has become… and that it’s now officially tourist season in Europe. School’s out, yo.

My big night out in Sevilla is not a story ready for this blog (or maybe the blog isn’t ready for the story, I should say?). However, I will say this: Sevilla can easily be a lot of fun. The bars and clubs may not be as plentiful as Madrid (or probably Barcelona), nor stay open as long or as late, but it’s easy to see why this is a party town. The weather is warm; the people are young.

On my first night in Sevilla I ran outside to see what I could find. I happened across a rally for their local futbol team (or so I’m led to believe). I love how sports can affect cities & people. It’s truly amazing where peoples’ passions lie, and how that can bring people together.

I love the Spanish spirit. Plazas are a great meeting place and serve many purposes. I wish they were something that were carried over to America. Street-drinking (ordering a drink at a bar and then standing on the street outside of it) makes a lot of sense to me, too. I remember doing this a lot at the pubs in London, but not so much in other places.

On the Major Tourist Attractions 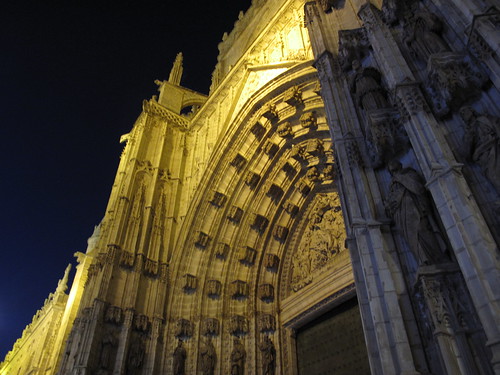 Sevilla has been an important city in Spain and it’s easy to see why. It’s on the border of so much history. The Cathedral is pretty nice. Especially at nighttime. And the city claims (allegedly proven with DNA testing) to house the tomb of Christopher Columbus.

I found the city most interesting for its fusion between Moorish and Christian influences, mixed in with some Judaism and ancient Roman stuff. The Alcazar (free entry with a student ID) is the most obvious representation of this melding of society—and also the most beautiful. It seems much of Spain has been conquered many times—whether by the fascists, Moors or Christians. 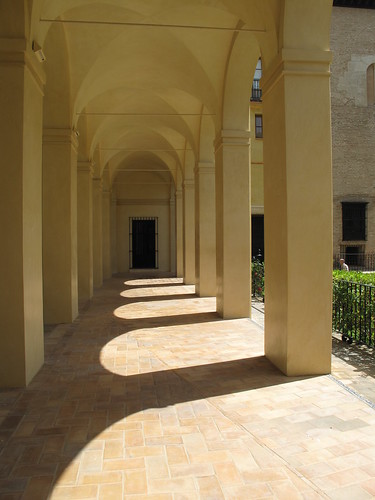 So many arches. The Alcazar.

It’s easy to get lost in Sevilla’s city center—but that’s not a bad thing at all. I loved wandering through the old Jewish quarter (Barrio Santa Cruz) which seemed very… old. When you’re lost, you stumble on ghost stories & Don Juan monuments. On ancient Roman columns. On graffiti down by the river. 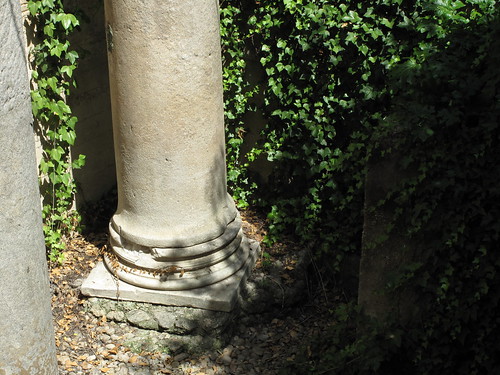 Ancient Roman column—from a really, really long time ago. One of six you’ll find throughout the city.

It is HOT here. Luckily, ice cream is easy to come by. And my hostel has a swimming pool. Being here at just the beginning of summertime, I can see the importance & usefulness of the Spanish siesta. Who would want to be outside during the high heat of the day? It’s best to be inside.

Sevilla seems to fully embrace the siesta. Much of the city closes down and you’ll mostly find tourists around. It’s best to take a nap.

Sevilla is nice. A sleepy city with some serious Mediterranean weather (without the beaches). The city was calm though the people moved faster than the Madrileños up north. But maybe those people cutting across the street & zipping through the alleys were just tourists like me trying to hide in the shade.