Hey – some Berlin culture for you:

Last night I attended the opening of a festival/exhibit/conference called “Translating Hip Hop”. I’d seen the posters for it all around Berlin, but considering it was in German, didn’t think much of it. I think the neon green is what first attracted me. I’m not even that much into hip hop. Helvetica and nice typography, on the other hand, I can totally dig. Regardless, a friend was going and it was apparently free, so I thought I’d check it out.

As it turns out, hip hop is a fascinating subject! I don’t know much on the subject, but some key points I learned about hip hop:

The event kicked off with photographer Joe Conzo speaking about growing up in the Bronx while hip hop was just starting to come to life. He said some interesting things which you can check out in the SoundCloud clip below:

Joe Conzo at ‘Translating Hip Hop’ in Berlin by travelsofadam 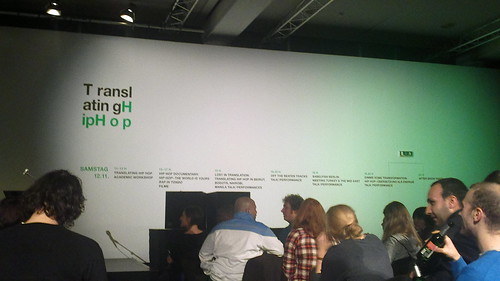 Waiting for the hip hop (around the world) event to start. My kind of conference--the kind with beer!

That was just the introduction and it was enough to keep me hooked. The Translating Hip Hop website has a nice short summary of what the weekend’s events would be like:

Translating Hip Hop is about the content of Hip Hop. Anyone who wishes to understand Hip Hop lyrics must not only be able to decipher the diverse sub-cultural codes on which the language of the rappers is based – above all, what is needed is deep knowledge of the language in which the rapping is done.

Originally derided as “Black Noise”, Hip Hop has spread around the globe in the last 30 years. The various dimensions of this energy-laden form of culture are practiced all over the world: Rap, DJ-ing, Breakdance, Graffiti. The body language and gestures are understood almost ubiquitously and translations can pass unnoticed. 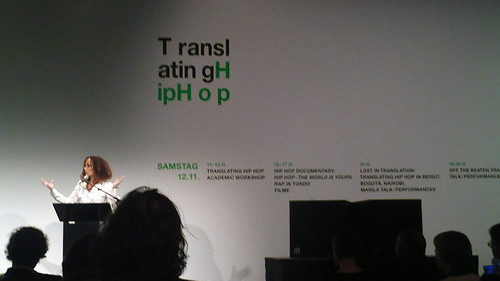 The night’s keynote speaker Tricia Rose (a Brown University professor) was from New York (the Bronx, hey) and she spoke eloquently about the subject of hip hop and it’s influence around the world. She managed to make a subject matter (hip hop) I’m not entirely interested in both interesting and informative by talking about it’s societal and cultural implications around the world. Her address was all over the place, but somehow it all made sense and resonated with me. She was all over the place—talking about Ronald Reagan, players & haters, the 99% (“occupy hip hop”), Syria, how cultures circulate and what it means to be “underground.”

She had some truly interesting thoughts about hip hop culture. You can catch a glimpse of her discussion at about the 2-minute mark in this video from yesterday:

The event is happening here in Berlin through Saturday, November 12. It’s worth checking out if you’re interested in alternative cultures. The workshops, talks and lectures are all free while the concerts are 10 €. 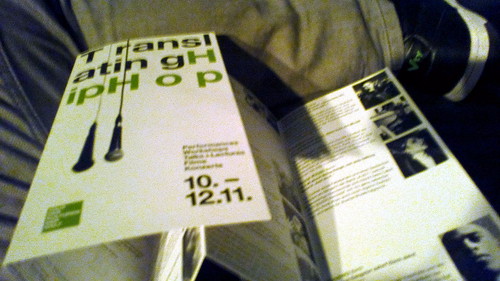