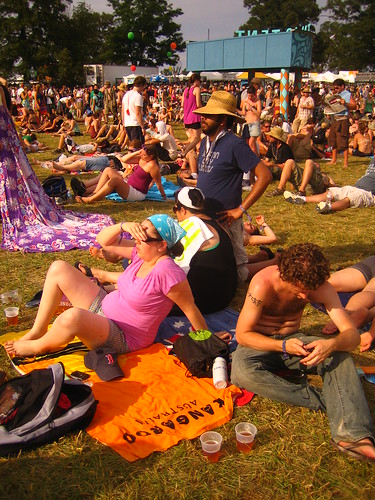 Well in honor of the fact that Bonnaroo’s 2010 lineup was announced yesterday, I’ve decided to post a photo from when Mr. Wombat visited Bonnaroo in 2008.

You’ll probably notice that Mr. Wombat is missing from this photograph. Due to a certain mishap (story to come eventually… maybe), photographic evidence proving Mr. Wombat was at Bonnaroo is severely lacking (meaning: not at all). You’ll just have to trust me.

Also, you might notice that the Kangaroo/Australia towel is the same as when Mr. Wombat and I visited Puerto Rico. Perhaps if you examine this photo closely, maybe you’ll see Mr. Wombat hiding in my backpack. Or maybe he’s just wandered off in search of… food.

Anyways, Bonnaroo in 2008 was headlined by Pearl Jam. Highlights for me included Sigur Rós, M.I.A., Tiësto, MGMT, Vampire Weekend and Iron & Wine. Then there was that whole Kanye fiasco.