Travels of Adam? Travels of a wombat! Wombat Wednesday follows Mr. Wombat on his travels around the world. 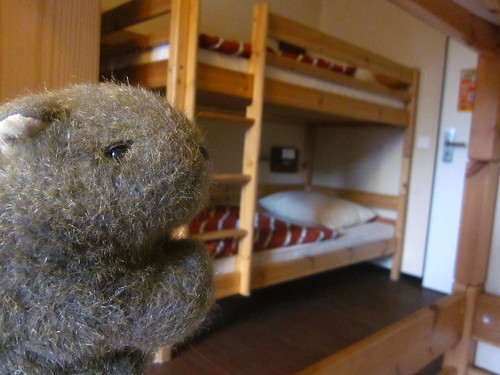 If there’s one thing Mr Wombat loves more than himself, it’s things named after him. Here’s the scoop:

As I’m prone to do, I posted to Twitter that I was going to be flying to Berlin soon (this was already more than a month ago). And because Twitter is awesome, @emilyhphoto (a Seattle area photographer) immediately replied & offered to recommend some places in Berlin. She graciously e-mailed me a long list of things to do and places to stay. But something immediately stood out: a hostel named Wombats…in Berlin?!

I knew it’d be a match made in heaven.

Wombats City Hostel is undoubtedly awesome. A little more expensive than some of the other nearby hostels, it’s got an incredible reputation among travelers. Since staying there I’ve spoken to lots of other folks who’ve traveled to Berlin, and everyone seems to know of this place. Mr Wombat and I were lucky to stay twice, actually. I hopped around from hostel to hostel (and couchsurfer to couchsurfer) more than a handful of times, but of the the four hostels I visited in Berlin, Wombats was probably my favorite. I had more than a handful of incredibly fun nights out that all started up on the rooftop bar. Though I might be a bit biased, because really, who could deny the awesomeness of a place named after the most adorable animal in the world?!

__
**Note: I stayed in Wombats twice, actually. The first time I was a paid customer; the second I was a guest of the Wombats staff in exchange for mentioning it here. But all opinions and claims are my own.