Technology and the way we travel

“Until now, civilization has continued to wager its future on the proposition that technology always will solve the problem, whatever the problem might be.”

This quotation is a little old, but I think it’s still relevant today. While cleaning out my bookshelf I found this book

from one of my first college classes. Though I remember arguing some of the points made in the book, I definitely think the book encouraged me to ask a lot of questions.  Like this long & confusing one I scribbled on the inside: 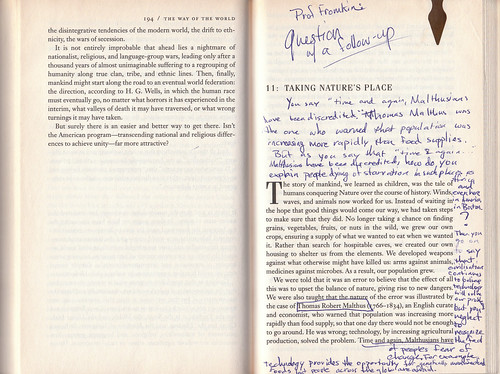 Technology will always be changing the way we travel

As travelers, there are many technological advances that have made travel more approachable. We’ve literally got the whole world at our fingertips. We’ve got the Internet, iPhones, GPS, SIM cards, WiFi, solar backpacks, smartphones, GPS phones, netbooks, laptops, digital watches and so on and on and on.

As far as changes in technology, I think it usually goes one of two ways. People either react against change, or put all their hope & prophecies in its success. Just as you should question big changes,  you should also be prepared to adjust and adapt. It’s how we’ve survived so far. I’m taking a middle-of-the-road approach.

Technology where it’s at today is good for travel. But there definitely has to be some respect out there for those that want to avoid (whether all or some) technology while on the road.

The tourist v. backpacker conundrum has been debated at length. Even recently. It’s a moot point by now, at least by all those people who are connected on the Internet. If you’re a stickler for a “more authentic” way to travel, than you’re likely not on the Internets. All power to you, but I can get just as much out of travel if I use all my wits—and all my resources, too.

Technology has made it easier for so many people to see places firsthand. In my opinion it’s the act of traveling which changes you as a person—not just what you see or what you experience, but the very act of being there.

And for me, that’s what’s really important. To be there.