Breaking the Silence tour of the South Hebron Hills 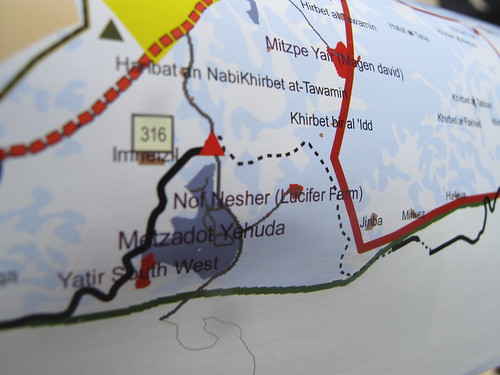 Breaking the Silence is a group of soldiers who are Israeli veterans from the West Bank. The group’s main goal is to expose the true reality in the occupied territories, and to promote a public debate on the moral price paid by Israeli society.

Just days before my day tour was to depart, the tour was changed from a visit to Hebron itself, and instead to the surrounding hills. This came at the recommendation of the local Israeli police. Why? Well, it seems the Hebron settlers had started getting more violent recently and had begun throwing rocks at Breaking the Silence tours. The settlers are not only violent against Palestinians in the West Bank city, but also visitors.

About the South Hebron Hills

The South Hebron Hills are almost completely ignored by the media and in public discourse. Israelis don’t know what happens here. And, speaking from my experience, I’d say many Israelis don’t care to know what happens. There is a serious lack of truth and honest discussion of what happens in the West Bank—especially locally. The soldiers’ stories from their service in the region are not extreme stories. They are common throughout the West Bank, but many believe that they’re just “rotten apples.” They’re not. These things happen every day. Breaking the Silence’s goal is to show that these stories are a part of the daily lives of so many.

I generally believe that knowledge is power. If just regular Israelis were made aware of what was happening in their “backyard,” things could move a lot faster toward peace. But too many people live in “the bubble” and are tired of hearing about “the place.” They want to move on with their lives. I can’t blame them too much, but when so much is at stake I cannot help but think ignoring the truth is a sign of selfishness.

Photos and Information from the tour

I am not a journalist. These are snippets and photos from the many stories I heard and scenes I saw on the tour. I hope you’ll find it informative, but if you’re really interested in seeing and knowing what happens in the West Bank, please check out the many testimonials and background information on Breaking the Silence’s website.

To view more photos from the tour, view my set on Flickr. I also have a few videos that I’ll try and post when I can. Some of the background information in this post came from some Breaking the Silence pamphlets from 2004 so information may be slightly out-of-date. Photos and tour information is from September 2010. If you’re interested in joining a Breaking the Silence tour while in Israel, visit www.breakingthesilence.org.il.