Getting from Jerusalem to Amman (whether you're on an Israel-Jordan tour or not) is actually pretty easy. Use this do-it-yourself guide to save some money. 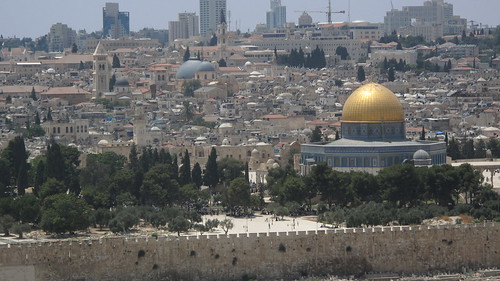 About the border crossing

Israel is notorious for tight security. Especially at their borders. So even though I was leaving rather than entering Israel, I was understandably on edge. Not to mention that my Israeli tourist visa was expired by 5 days.

My flight to India was from Amman, Jordan but I was currently staying in Jerusalem. How do you get from Jerusalem to Amman, without unnecessary stress and frustration? There are three border crossings between Israel and Jordan. Though there is a border opening in East Jerusalem (the King Hussein/Allenby bridge), because of certain restrictions and it’s notoriety for long waits, I chose to take the northern border crossing from Bet She’an. And it was easy!

Coming the other way and planning to stay in Jerusalem? Get the FREE Hipster Guide to Jerusalem right here.

***January 2013 note: I recently learned there is a direct bus from Nazareth to Amman as well every Saturday, Sunday, Tuesday and Thursday at 8:30am. Nazareth is just a simple bus ride away from Jerusalem so this would be an easy alternative. Additionally, Nazareth’s Old City is quite scenic and there are definitely some things worth seeing if you decide to spend a few days there. If so, I highly recommend the Fauzi Azar Inn which made my 2-night stay incredibly enjoyable.***

Just 5 steps to get from Jerusalem to Amman

Here’s how I did it…and how you can too! (information valid as of February 2011)

All in all, it took me just about 5 hours total to get from Jerusalem to Amman. When I purchased my ticket to India, I purposely bought it departing from Amman rather than Tel Aviv because it saved me nearly $350. And as it turned out, crossing the border over land rather than flying was much cheaper and just a bit longer. And security was a lot less stressful than the Ben Gurion airport. Jerusalem-Amman? Not a problem!

One other thing I’d like to mention: I don’t really recommend taking a Israel / Jordan tour, or one of those “holyland” tours to get from Jerusalem to Amman (or vice versa). The Middle East is safe enough and the people are friendly enough that it’s perfectly manageable on your own with just a little will. And if you’re planning a tour to Petra, Jordan from Israel… I definitely don’t recommend booking it, but instead doing it on your own. But that’s another story.

Coming the other way and planning to stay in Jerusalem? Get the FREE Hipster Guide to Jerusalem right here.