My first impressions of Jerusalem

It was just meant to be a short trip. I’d come directly from Petra, Jordan the day before. After a month in Egypt, my whole body was tired of the “travel” thing. In Jerusalem, I just wanted to see the sights and move on.

But that didn’t happen.

Something in Jerusalem captured me. Arriving at the Central Bus Station after dark, during Shabbat, it was my first time in Israel. It was a strange experience from the very beginning. During Shabbat public transportation in Israel comes to a complete stop. I’ve complained about shops being closed on Sundays in other countries, but imagine all public services and most businesses shut down on the holy day? It’s rough—especially when you’re a first-time backpacker in a completely foreign place. But you manage. You always do.

With my backpacker friends (picked up on the journey from the previous few days), we stuffed ourselves into a cab — hoping that the driver wouldn’t notice there were too many of us (and too many backpacks). We’d made a last-minute reservation at a hostel in the Old City (this was 2010, before Abraham’s opened). Our taxi could only take us to Jaffa Gate; there are no thru roads in the Old City. Walking through the gate at night, after a long travel day starting in Petra hours before, our walk through the Jerusalem Old City was an eye-opener.

Stumbling through the streets, thankfully after the Old City markets were already shut down, I felt as if I was in another time, another world. At the hostel, we were shown to our rooftop—there were no more rooms, just some mattresses we could throw up on the roof and sleep up there. This was my backpacking adventure. It was late, we were tired and hungry. The sounds were foreign and the alleys were dark. But I wasn’t scared. The streets may have been empty of tourists at the time but the city felt strangely alive.

That first evening in Jerusalem’s Old City was a strange one. But every little encounter just made me fall in love with the place. From a quick slice of pizza at Jacob’s (delicious, by the way) to watching a football match on a bar’s outdoor projector screen. The city captured me from the very beginning.

Today, Jerusalem is one of those cities I have many fond memories of. It’s a place that has so much strange power, so much intensity, it’s a place I want to visit over and over. There aren’t many cities I can remember visiting for the first time—and none so vividly as my first night in Jerusalem. Shortly after my very first visit to Jerusalem, I put this feeling into words:

Jerusalem really is unlike anywhere else. The history, the culture, the sights. Everything about it is different. There’s an intensity in the air and you can feel people’s passion, people’s spirituality. The intensity is inside the walls, inside the people. It’s both exciting and terrifying, but all very comfortable. It almost feels like a city for everyone. — Travels of Adam, 2010 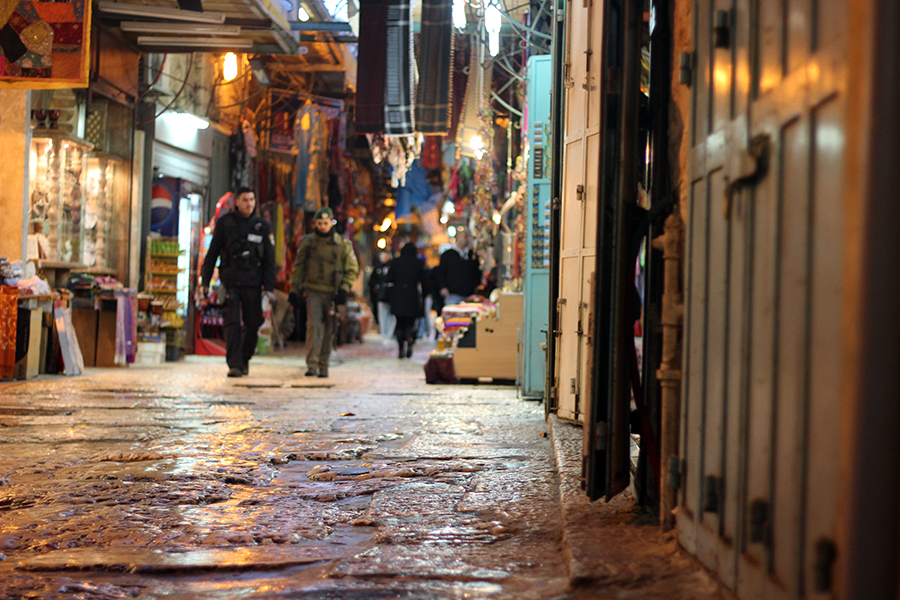 Is there a city that you remember visiting for the first time? What kind of impression did it leave upon you?