How a children's book inspired my wanderlust

If you couldn’t tell from my fairly philosophical (ie, rambling) posts of late, I was in serious need of some inspiration last week. So rather than my typical fail-safes of visiting museums or walking around, I opted to stay indoors. On Sunday night I curled up with my Kindle (read my review of the Amazon Kindle Paperwhite), and opened one of my favorite childhood books: The Twenty-One Balloons. 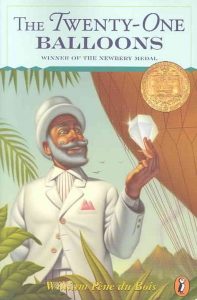 It’s a book obviously mean to inspire curiosity and an adventurous spirit among children. Published in 1947 and set in the 19th century, the book still is relevant today. The story focuses on one intrepid explorer, Professor William Waterman Sherman, and his desire to leave San Francisco behind and set off in a balloon to travel around the world. Once he sets off, though, a series of unfortunate events change his plans quite dramatically and he’s forced to make a crash landing—on what you would expect to be a deserted island in the Pacific.

In fact, he lands on the island of Krakatoa. When I first read the book, it was my first introduction to the Javanese island. Krakatoa is most famous for its volcano—which exploded in 1883 and is, to date, the loudest sound ever heard. The sound of the explosion was heard all the way in Australia and the tsunamis from the explosion killed nearly 40,000 people. If that doesn’t get your fingers trembling, I don’t know what will.

So this book, The Twenty-One Balloons, it’s a fun story about this Professor who’s stranded on an island. Turns out the island (if you haven’t guessed, it’s Krakatoa pre-explosion) isn’t uninhabited and there are all these American families living there. The island is full of diamonds and the families (named by the letter of the alphabet) have all decided to create a utopian society, living off the wealth of the island. There are quite a few contradictions within the children’s novel. For one: there’s the contradiction between the importance of wealth (necessary for this utopia to exist), but then the fact that there’s no currency and no need for it among the society they’ve created for themselves:

Our only work now, besides cooking, is in trying to make life more pleasant for ourselves and for each other.

You see, what I loved about this book as a kid is the focus on architecture and food in this utopian society. Each family is responsible for bringing a country’s culture to the island nation. There’s a Moroccan-themed house, an American townhouse, a French palace, and so on. The author, William Pene du Bois, illustrates several of these houses and their silly inventions (the children of Krakatoa created a merry-go-round which works with hot-air balloons) throughout the novel.

As a kid, I was always fascinated with inventions and architecture. I remember drawing and designing made-up houses. There was even a high school project in my world history class which involved creating a constitution and government plan for my very own island nation. There’s something adventurous and exciting about this kind of thinking, and I believe that’s why this book is one of many responsible for my wanderlust.

Ultimately, the people of Krakatoa are inspired by the Professor’s tales of home. Reminiscing on the past, they’ve got this to say about what home is:

I suppose one doesn’t think of one’s home town in terms of streets and buildings as much as one does of personal associations, friends, and relatives.

And like all good things, this story ends with an explosion (can you guess which?!). The book’s a good one, du Bois’ illustrations are fanciful (and surprisingly came across well in my Kindle edition), and there’s much to be wondered about when finishing the story. It’s a short read; it’s a children’s book after all.

Buy it on Amazon (available as a paperback and Kindle edition).